Version 7.1 of Query Management Facility (QMF) for Windows for AS/400 will become generally available on September 29 of this year. Are you excited? If not, should you be?

QMF is not new; it's been around since 1983 in the IBM mainframe world. QMF for Windows, the newest member of the QMF family, is a point-and-click, SQL-based query tool designed to make exploring the database wilderness easy for everyone, from tenderfoot to master scout. QMF is available across IBM's entire product range.

The heart of QMF is its prompted SQL screen, shown in Figure 1. (I created this from QMF 6.1.1; Version 7.1 was not available for demo at press time.) If you know anything about SQL, you can see that each small window in the panel corresponds to the various SQL clauses: FROM, WHERE, ORDER BY, etc. The buttons above each window are used to manipulate entries in the window. You can add entries, edit them, delete them, and move them up and down in the list. Clicking the plus (+) sign opens another display from which the user can choose entries. For example, clicking the Sort conditions: plus sign displays a list of eligible column names.

QMF also allows the user to key in free-format SQL statements. You can switch from one view to another just by clicking a button on the toolbar. Any SQL statement, not just SELECT, is allowed. You can create tables, drop tables, insert rows, update rows, grant authority, and so on.

So, as you can see, QMF is more than just a query tool. Not to worry, however: The QMF for Windows Administrator governing facility allows you to control what SQL commands a user can use as well as a lot of other things that users do.

QMF can access data from many different servers. You can use it to access data from any of the DB2 UDB family. You can also use DB2 DataJoiner to make QMF get data from other databases and file systems, including IBM Virtual Storage Access Method (VSAM) and Information Management System (IMS), Microsoft SQL Server, and Oracle and Sybase systems. QMF for Windows permits three different types of connections to server machines: TCP/IP, SNA, and CPI-C.

and you can feed the results of a QMF query into a Web server for access through users' Web browsers of choice.

Take It for a Test Drive

For more information about QMF, visit www.ibm.com/qmf and www.rocketsoftware.com/QMF/home.html. Rocket Software is a Massachusetts-based company that develops and supports QMF. At its Web site, you can get a good overview of QMF, download introductory tutorials, take an online tour, or download a trial copy of QMF 6.1.1, good for 60 days. Rocket even has a database server you can access, via the Internet, to play with QMF. According to the IBM Web site, you will be able to download Version 7.1 for trial once it becomes generally available.

By the way, Rocket has another product you might find useful. Its Query Manager/400 Migration Tool converts queries and query forms to QMF.

QMF raises the standard for querying and reporting in AS/400 installations. With this new release of QMF for Windows, I look for QMF to become as common in AS/400 shops as Query/400. 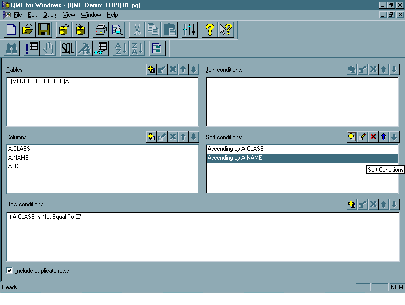