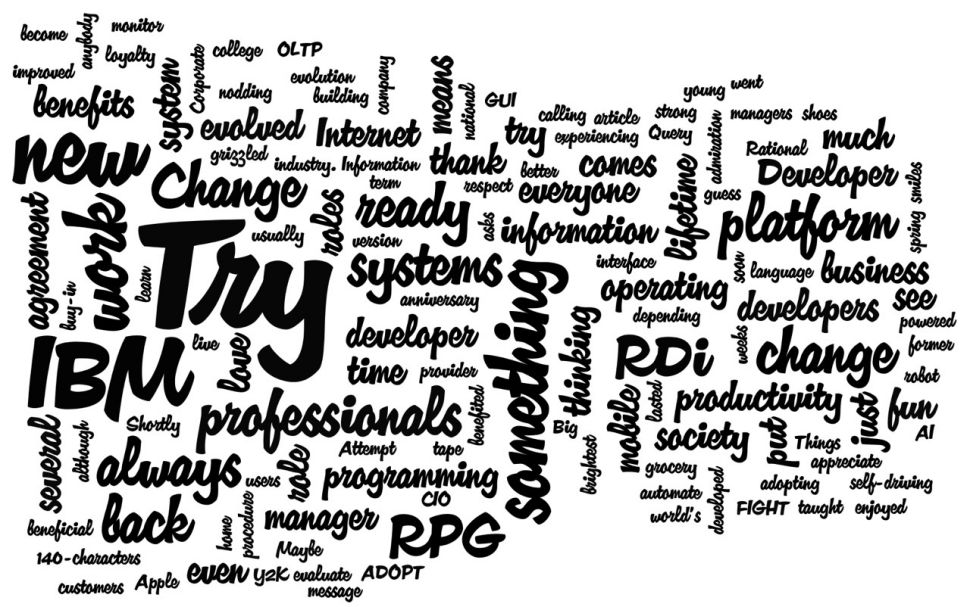 The topic of this article resulted from several recent events:

These events prompted me to evaluate changes in our industry. Information Technology workers are often in the role of “agent of change” (or worse names, I suppose, depending upon whether those experiencing changes are ready or not). Originally, information systems were bought or built and then installed and everyone just had to live with them. Now, we’ve evolved into a collaborative society, an inclusive, mobile and social society where buy-in and agreement are sought, meaning not only does everyone have an opinion, but it’s normal to express it, even if only 140 characters or fewer at a time.

Pondering this, it’s impossible not to appreciate the evolution during a generation of IT professionals. We’ve taken the world beyond cards and tape in the back room, from batch to OLTP, through the invention of the Internet, past Y2K, to supercomputer-powered apps in our pockets. DOS grew to become Windows10, Apple went from near death to a high market cap consumer-focused company. We’re on the cusp of The Internet of Things (IoT), where you control your home from work; your clothing, shoes, and jewelry monitor your health; intelligent refrigerators help with grocery shopping; and, hopefully, your self-driving car will stay in its lane and won’t get hacked. A drone will deliver your groceries, and your robot will put them away. There is so much data that the term “big data” soon will be too small for the tidal wave of information at our fingertips.

When it comes to IBM i (or its predecessors CPF, OS/400, i5/OS), it’s been a long and fruitful relationship; many of us have been in love with this platform for a work lifetime! Yes, “love” is a strong word to use for an operating system, and I can hear someone saying, "Such a geek!” Guilty as charged, but I’m thinking I’m not the first to suggest these feelings. Maybe admiration, respect, or pride are better choices? There's little question that creating an operating system so robust, so ready for business, so ready for almost any task, is a remarkable achievement. Eclipsing competitors from the ‘70s through ‘90s, it was built to last but able to change and has not only lasted, but evolved and improved with time. It remains one of the most-used computing environments ever delivered.

You're reading this, so you’re likely already a fan of the IBM midrange. You’re nodding agreement or thinking I’m “preaching to the choir”, maybe even saying, “Duh, no kidding.” Many of us have enjoyed a lifetime of employment due to what we now refer to as IBM i on Power. We’ve benefited from applications we developed and the consulting, teaching, or managing that we did.

I'd like to thank the IBM employees, young or old, current or former, working or retired who invented, built or continue to build, and support this platform and the ecosystem that surrounds it. I won’t be alone in an expression of gratitude for work done right, kids put through college, mortgages paid, and fun had! Some of the world’s best and brightest built this. Thank you very much!

I’ve been in all the typical IT roles, coded in various languages, built business systems, integrated utilities, and worked with AI systems. Heck, I was a CIO for a while, although they didn't call my role that at the time. Again and again, those roles within corporate IT in various industries taught me several things:

So what’s the message that comes from all this? To IT professionals at all levels: Don’t fight evolution! Adopt new stuff!

If you’re the manager, when a developer asks for Rational Developer for i, have them download the trial version and report back about the benefits they see.

If you’re a developer, whether newbie or grizzled veteran, try something new that could benefit your productivity or that you always wanted to learn.

How do we translate this into specifics of programming professionals on the IBM i platform?

Attempt something new that benefits you or the enterprise. Have fun while doing it, whatever it is that you decide to do!

Whether you're a manager or developer, start calling it “IBM i” instead of "the AS/400" and see if anybody in the room smiles!