The answer to that question is right here!

Shortly before my book DB2 9 for Linux, UNIX, and Windows Database Administration: Certification Study Guide went into a second printing (which was in May 2009), IBM invited me to help develop the DB2 9.7 for Linux UNIX, and Windows Database Administration (DBA) certification exam (Exam 541). Knowing that a new version of the DBA exam was about to be created, I contacted my editor and asked if we should update my DB2 9 DBA book to cover the upcoming exam. At that time, it was decided that such a revision would be too costly and time-consuming and that, instead, the next revision would take place after the DB2 10 exams were developed.

That same year, IBM invited me to, once again, teach my DB2 for Linux, UNIX, and Windows DBA Certification Crammer course at their Information On Demand (IOD) conference. And since attendees would be able to take the 541 exam, at no charge, while they were at the conference, IBM asked if I could update my training material and teach to the 541 exam. My answer was "yes," and I spent the next four to six weeks completely reworking my training material to cover the 541 exam. Of course, I used the same technique to develop the material for that course that I use to develop all my certification exam training material and study guides: I carefully review the questions found on every version of the certification exam and I make sure that I cover the topics a test candidate will encounter when they attempt to take a certification exam.

Starting around April of 2010, I began receiving emails from various individuals who wanted to know when I was going to have a study guide available for the DB2 9.7 DBA exam. My response always went something like this: "My publisher has decided not to do a book for the DB2 9.7 DBA exam. However, I will be teaching a class that will help you prepare for the 541 exam at the IDUG/IOD conference this May/October." This response almost always led to a request for a copy of my training material. But, since that material is copyrighted (and is in fact, registered with the U.S. Copyright Office), I don't distribute it freely. So unfortunately, I was unable to honor their request.

Last year, after teaching my class at the 2010 IOD conference (where I was once again bombarded with questions about when a book for the 541 exam would be available), I approached my editor and made the suggestion that we make my training material for the 541 exam available, in the form of a supplement to the DB2 9 for Linux, UNIX, and Windows Database Administration: Certification Study Guide. She agreed, and the result is this book.

If you've bought this book (or if you are thinking about buying this book), chances are you've already decided that you want to acquire the DB2 9.7 for Linux, UNIX, and Windows Database Administrator Certification that's available from IBM. As an individual who has helped develop 17 IBM DB2 certification exams, let me assure you that the exams you must pass in order to become a certified DB2 professional are not easy. IBM prides itself on designing comprehensive certification exams that are relevant to the work environment to which an individual holding a particular certification will be exposed. As a result, all of IBM's certification exams are designed with the following items in mind:

You will find that in order to pass a DB2 certification exam, you must possess a solid understanding of DB2; for some of the more advanced certifications (such as the 541 exam), you must understand many of the DB2 nuances as well.

Now for the good news. You are holding in your hands the only material that has been developed specifically to help you prepare for the DB2 9.7 for Linux, UNIX, and Windows Database Administration exam (Exam 541). When IBM began work on the 541 exam, I was invited once again to participate in the exam development process. In addition to helping define the exam objectives, I authored several exam questions and I provided feedback on many more before the final exams went into production. Consquently, I have seen every exam question you are likely to encounter, and I know every concept on which you will be tested when you take the 541 exam. Using this knowledge, along with copies of the actual exam questions, I developed these study notes, which cover every concept you must know in order to pass the DB2 9.7 for Linux, UNIX, and Windows Database Administration exam (Exam 541). In short, if you see it in this book, count on seeing it on the exam; if you don't see it in this book, it won't be on the exam.

Where Are the Practice Questions?

For those of you who have purchased my DB2 certification study guides in the past, I would like to say "thank you." A tremendous amount of effort goes into the creation of those books, and it is rewarding to know that they are helping people become DB2-certified. In addition to thanking you, I also want to apologize up front for the lack of sample questions and answers that you have grown to expect in my study guides. Since the pages that follow contain the slides I use to teach my DB2 for Linux, UNIX, and Windows DBA Certification Crammer course, there are no sample questions. And since I was busy trying to finish my 23rd book, From Idea to Print: How to Write a Technical Article or Book and Get It Published, quite frankly, I did not have the time to create practice questions for this book.

With that said, I can promise you that you will find everything in the pages that follow that you must know in order to pass the 541 exam. If you become familiar with the material presented in this book, you should do well on the test.

Many examples of DB2 administrative commands and SQL statements can be found throughout this book. The following conventions are used whenever a DB2 command or SQL statement is presented:

[ ]        Parameters or items shown inside of brackets are required and must be provided.

< >      Parameters or items shown inside of angle brackets are optional and do not have to be provided.

,…      A comma followed by three periods (ellipsis) indicates that multiple instances of the preceding parameter or item can be included in the DB2 command or SQL statement

The following example illustrates each of these conventions:

SQL is not a case-sensitive language, but for clarity, the examples provided are shown in mixed case; command syntax is presented in uppercase while user-supplied elements such as table names and column names are presented in lowercase. However, the examples shown can be entered in any case.

The following are an example of some of the slides found in this book. These slides illustrate how to create range-partitioned tables: 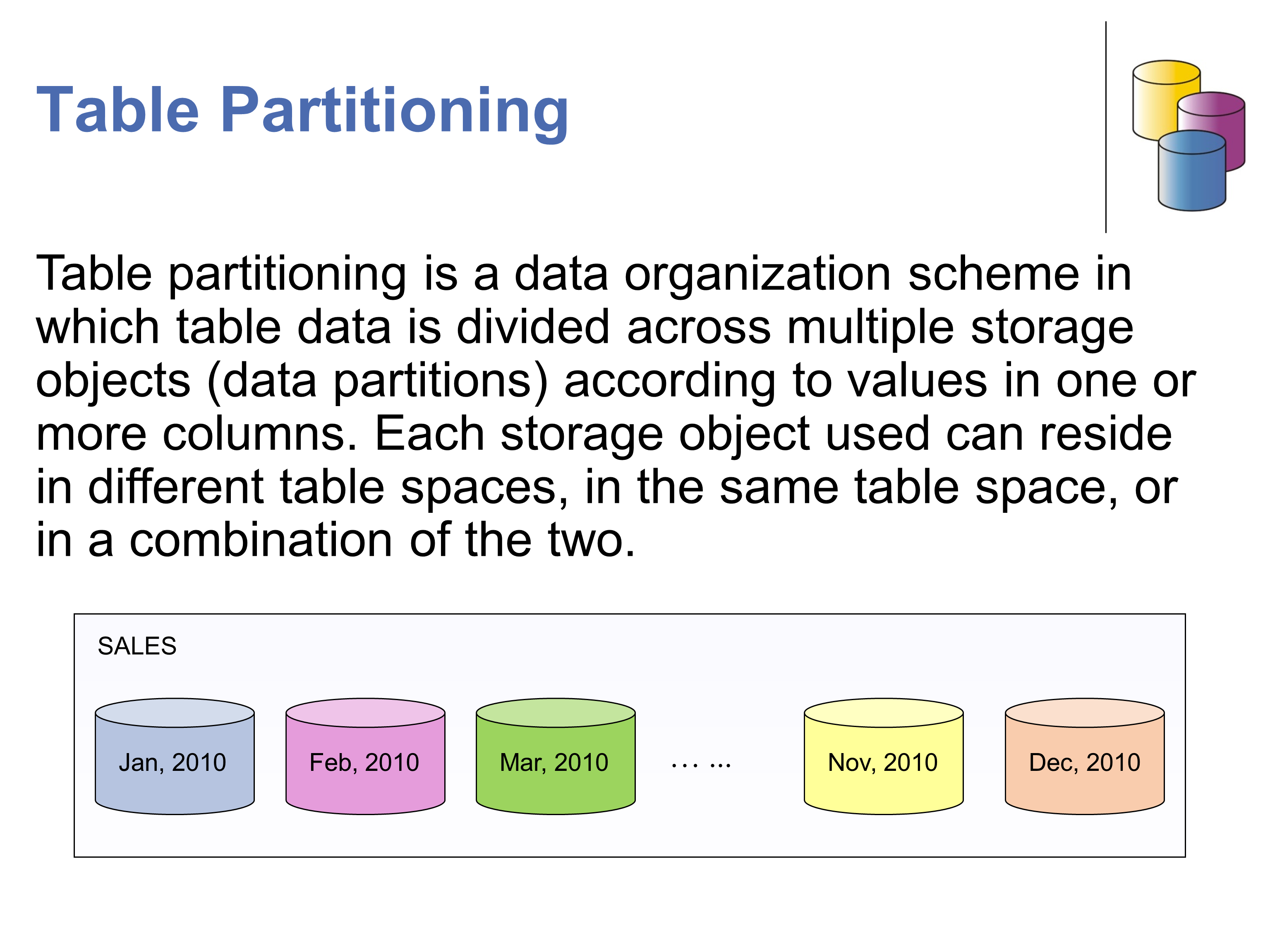 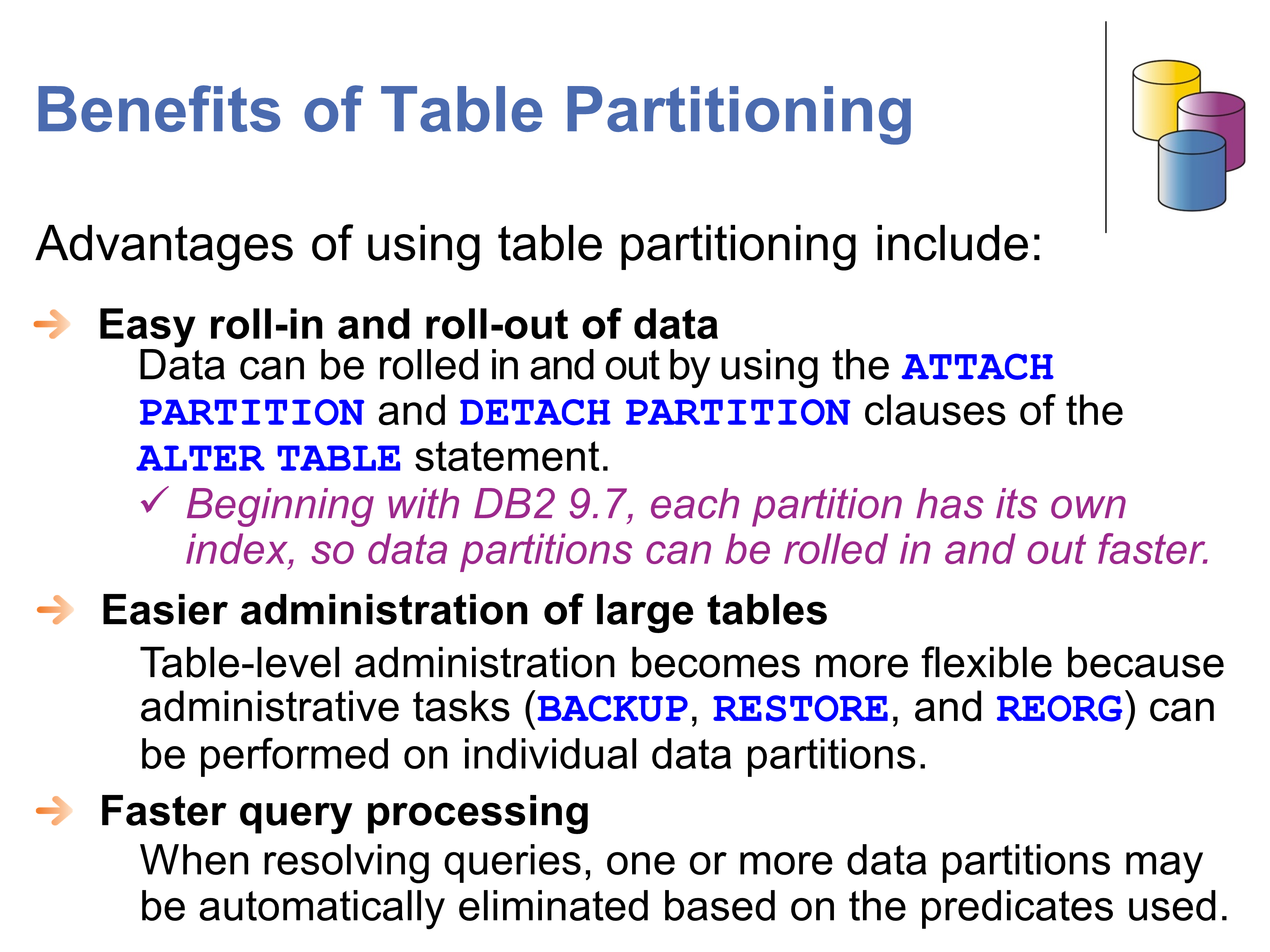 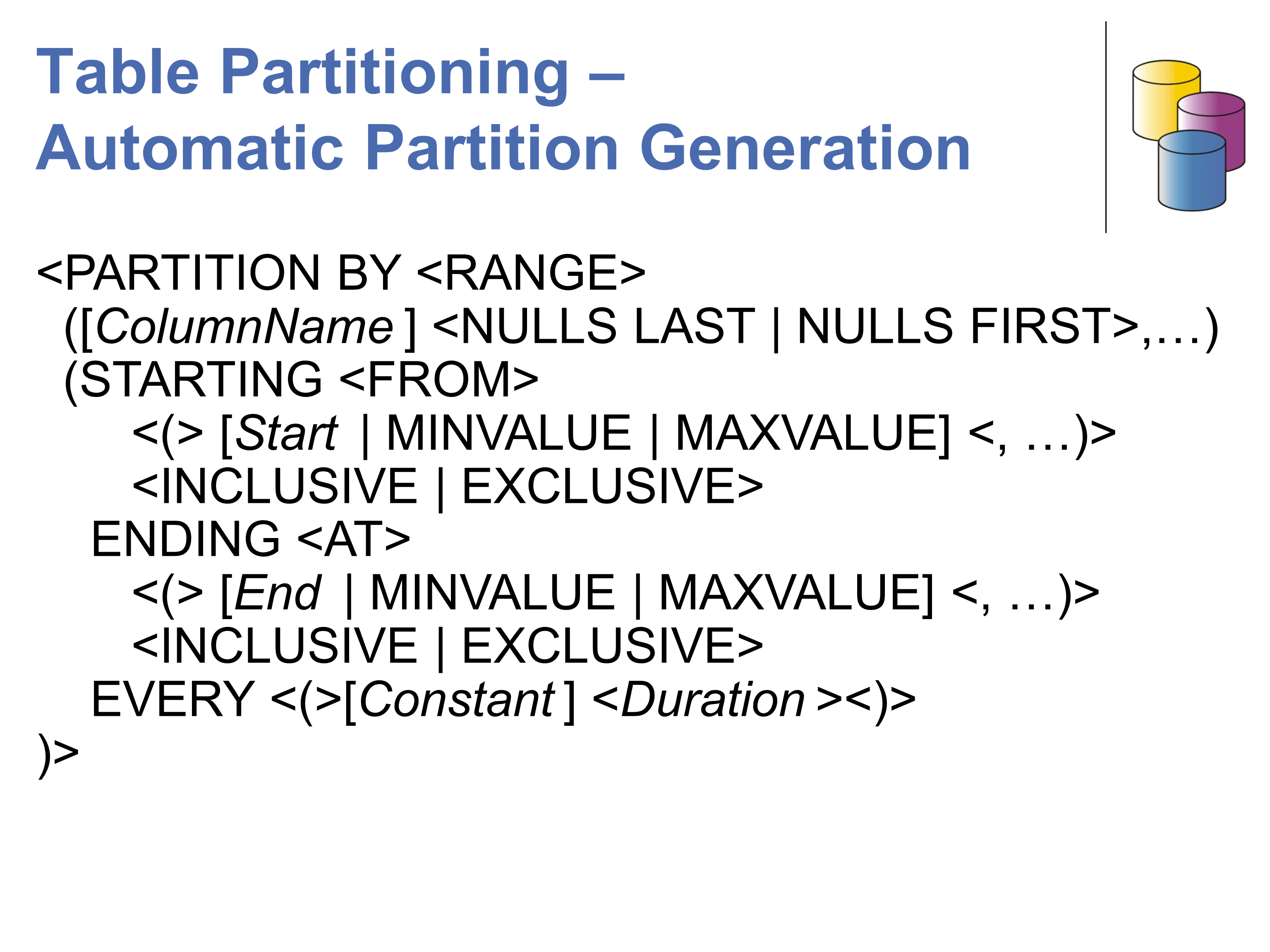 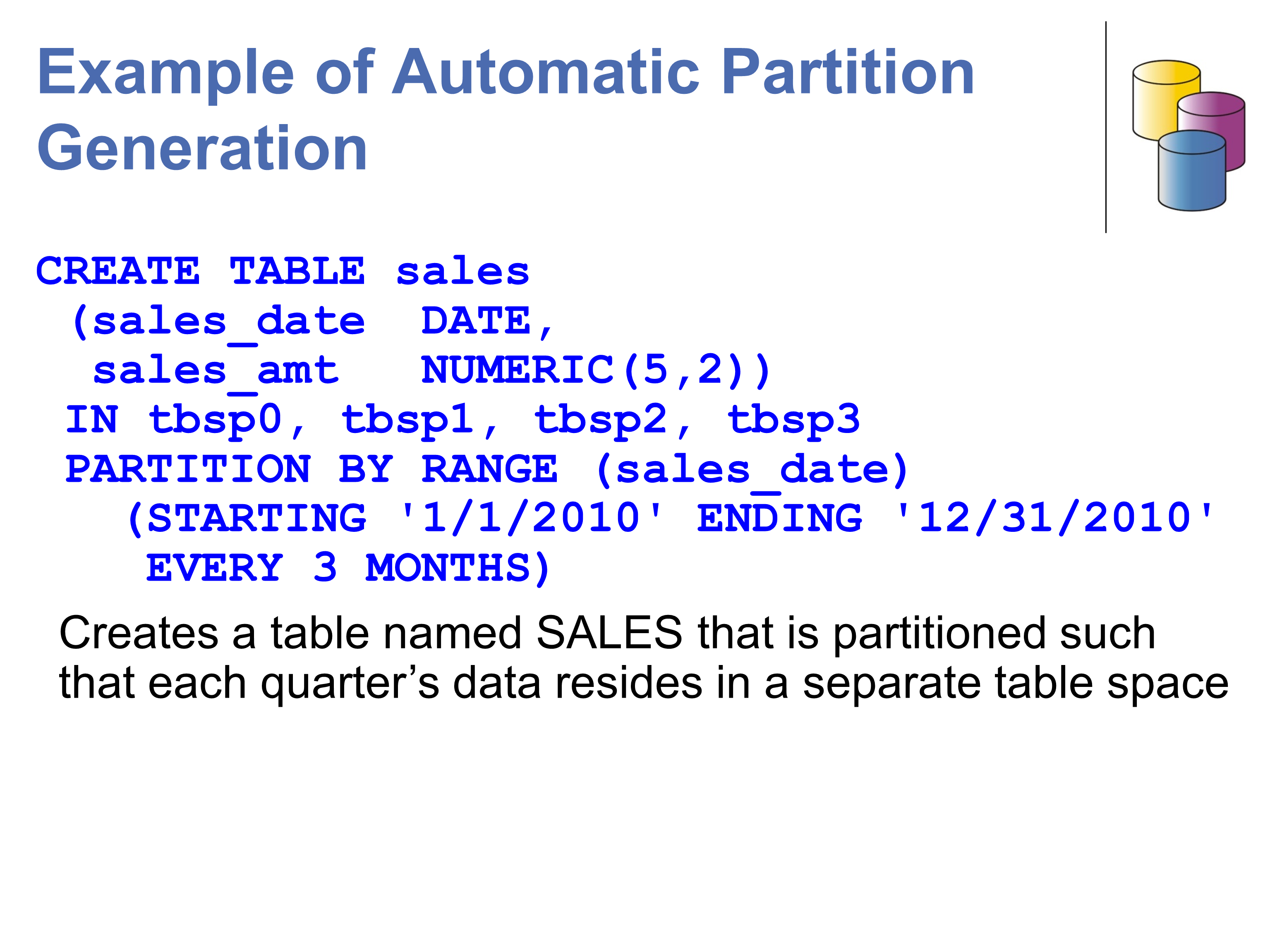 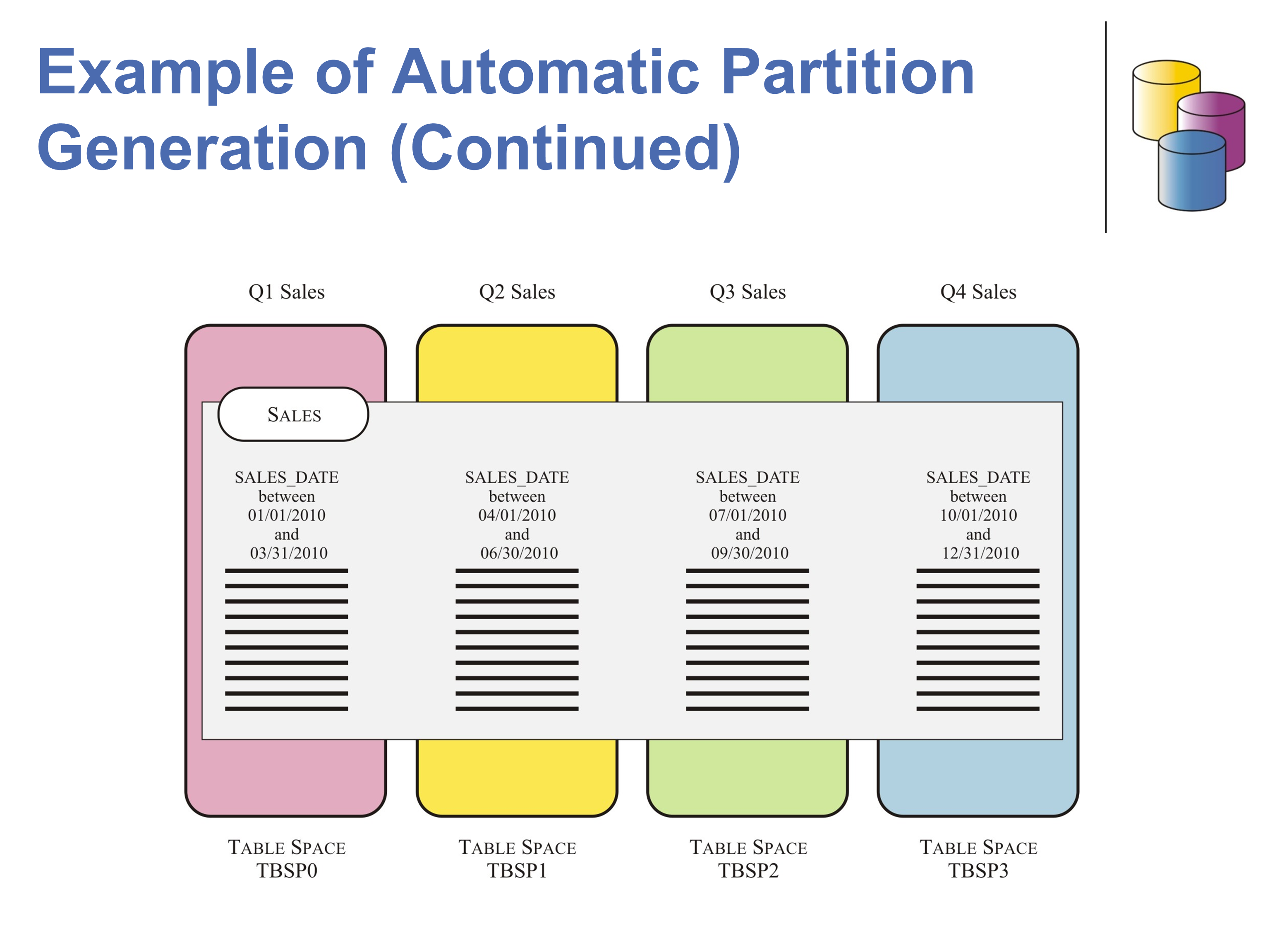 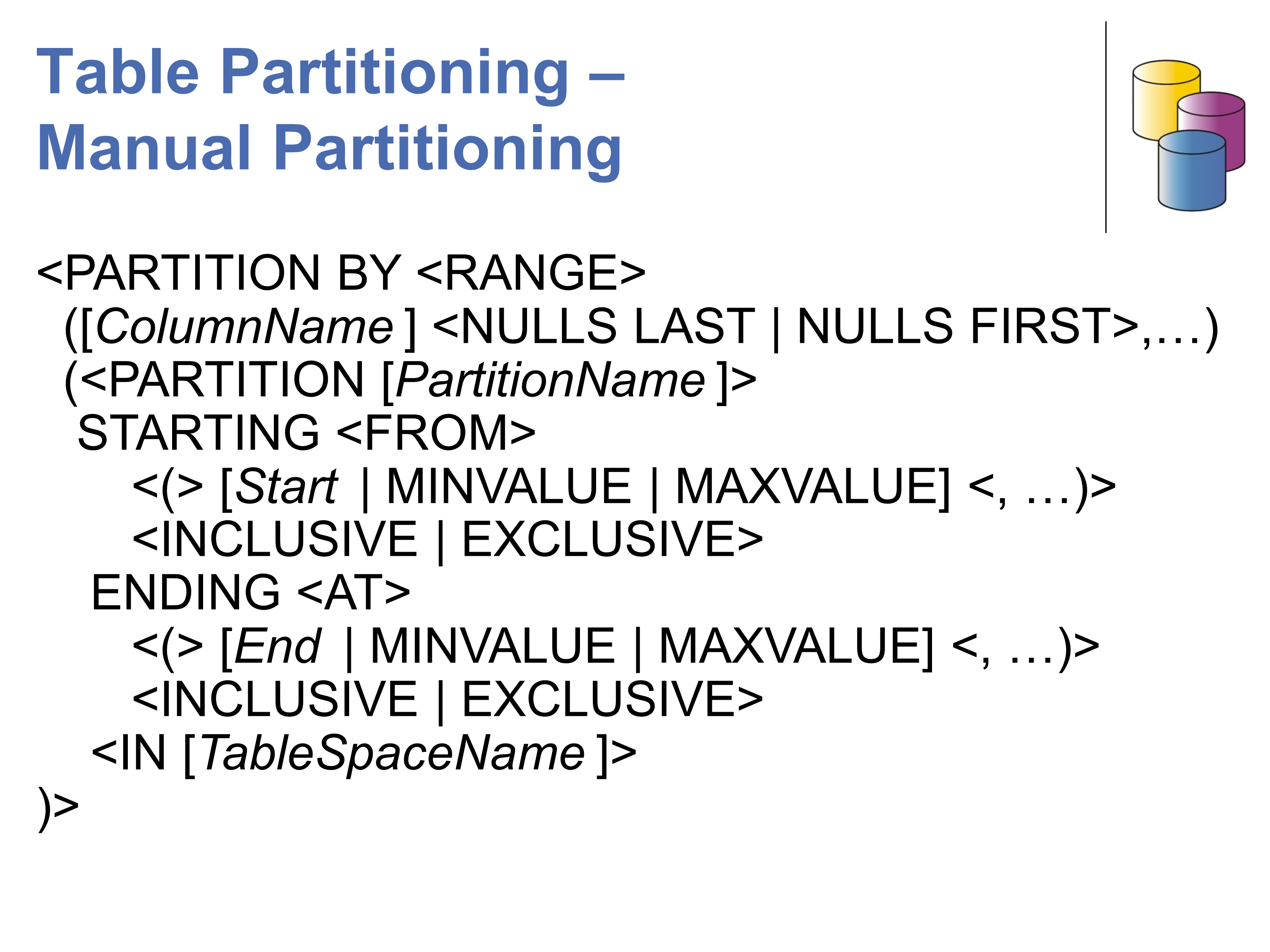 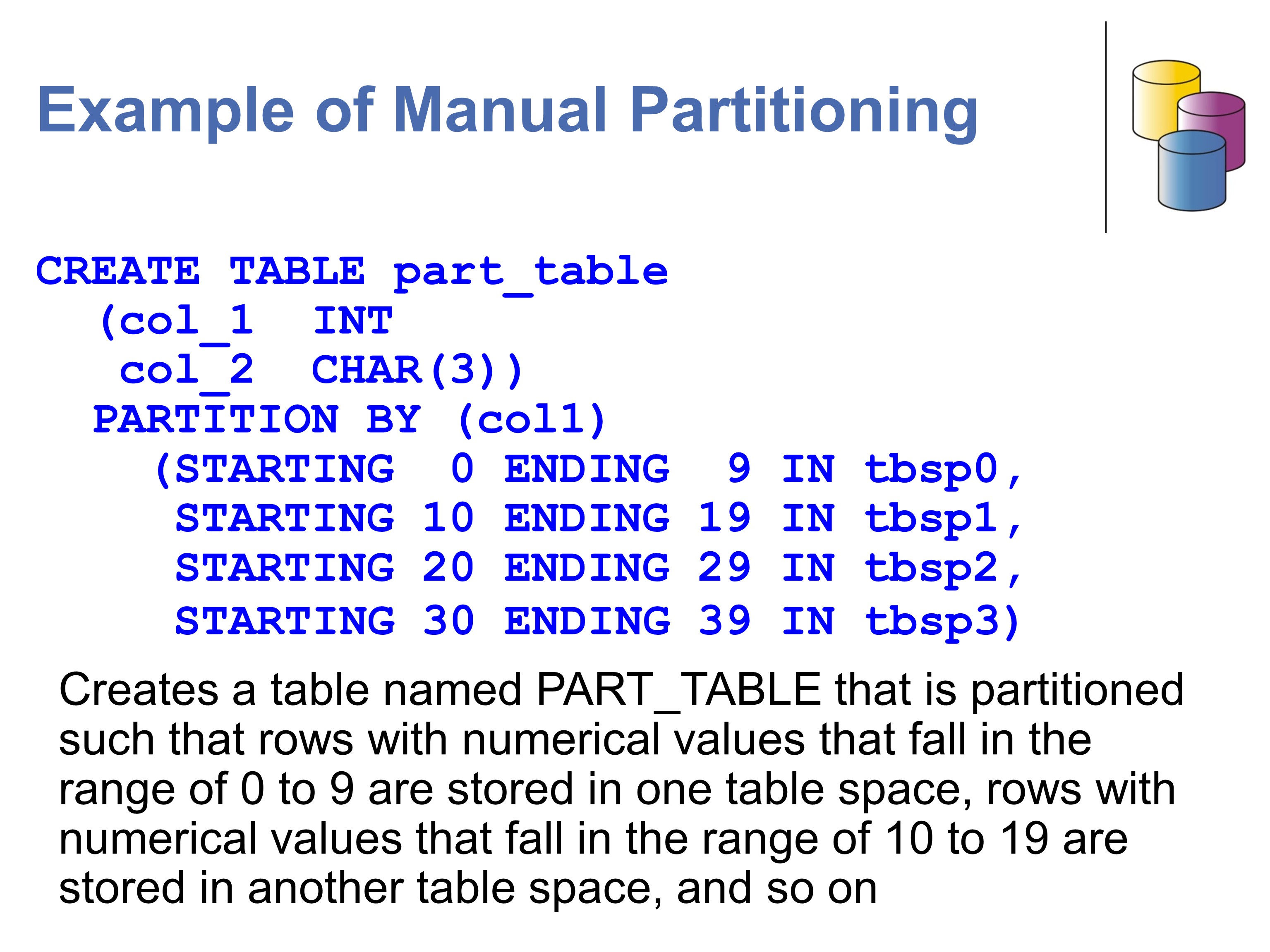 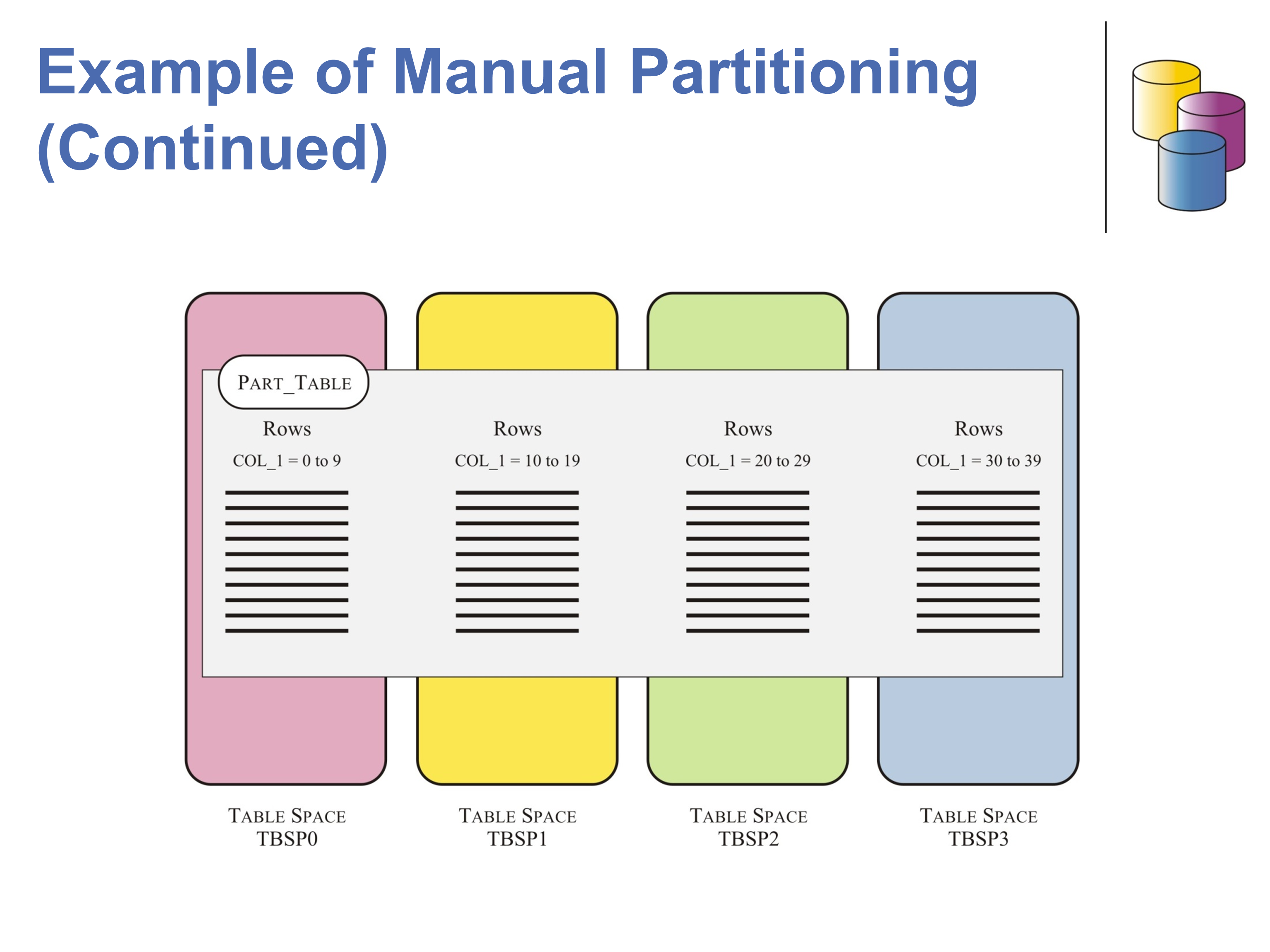