The International Group for Networking, Internet Technologies, and E-business on the AS/400 (IGNITe/400) is a user group of over 5,300 users, developers, and re-sellers of IBM's iSeries server and related products. The group, linked through a variety of electronic means, focuses on the development and deployment of e-business applications on the iSeries and maintains a very close relationship with IBM's e-business developers. When the user group members began to see that they needed a solution to help handle a quickly growing membership, Stalker Software, Inc. came through with the right product: CommuniGate Pro, a messaging server with the features and scalability that IGNITe/400 needed.

IGNITe/400 is the outgrowth of a couple of mailing lists sent to perhaps 50 early e-business practitioners and users of I/NET, Inc.'s Commerce Server/400, which in 1995 was the only viable Web server for the AS/400. As time went on, the mailing list grew until it included over 450 of the most cutting edge e-business independent software vendors (ISVs), commercial developers, and folks exploiting iSeries e-business technology. Unlike other mailing lists, the IGNITe/400 discussion list focuses exclusively on e-business issues, including performance, machine selection, and software configuration.

On July 4, 1998, IGNITe/400 opened a public Web site to share information about doing e-business on the iSeries and to provide a facility for users to exchange information. In January 2001, IGNITe/400 began publishing a monthly electronic newsletter that focused on e-business and the iSeries. The newsletter is free and currently reaches more than 5,500 people worldwide.

To disperse its mailing list to its members, IGNITe/400 was using a PC-based list management product that interfaced with the group's iSeries SMTP server. "Neither solution was satisfactory," said Bob Cancilla, managing director of IGNITe/400. "The PC software would hang or crash periodically. We used some third-party software to create an archive of messages sent over the mailing list that stopped working one day when the PC software was upgraded. We were also incurring tremendous overhead from the IBM SMTP server that would have made it extremely difficult to support our current mailing list of 450 subscribers and impossible to have supported the monthly newsletter reaching 5,500-plus people." As the mailing list grew, IGNITe/400 also found it was constantly repeating information posted to the list for new members.

IGNITe/400 was concerned about mail relay protection as well. Particularly nefarious spammers try to use any SMTP mail server on the Internet as a relay for their unwanted solicitations. They can, for example, send one email to a number of vulnerable mail servers and then direct those servers to route the email on to a hundred addresses. This practice not only overloads a server, but also places the unwitting server owner at risk of being seen as a spammer.

In 1999, IGNITe/400 received a very hostile email from Open Relay Blocking System (ORBS) that threatened to blacklist the user group because its system allowed mail relay. (ORBS, now defunct, was a "vigilante" organization that scanned the Internet for SMTP servers that allowed mail relay and threatened to blacklist them.) When IGNITe/400 received this note, group members were extremely concerned. The user group contacted IBM, who developed a PTF that allowed IBM SMTP users to block access from a list of IP addresses. Unfortunately, to be effective, the IGNITe/400 also had to block remote mail transmissions from remote users.

Stalking the Market for a Solution

When IGNITe/400 began to search for a software solution that would address these concerns, only IBM's SMTP and Domino were available as SMTP and POP servers for the iSeries. Both of these solutions have limitations. One of the IGNITe/400 members told the group that he was using Stalker Software's CommuniGate Pro software on Macintosh computers and that it was superb. IGNITe/400 checked out Stalker's Web site and saw that the company sold versions of the software for over 24 different operating systems; unfortunately, however, OS/400 was not included.

IGNITe/400 sent an email to Stalker offering the use of its machines for testing and development if Stalker would develop an OS/400 version of its software. Stalker took the user group up on the offer and ported its software natively to the AS/400 and iSeries. The initial port was to OS/400 V4R1.

In April 2000, IGNITe/400 downloaded the iSeries version of CommuniGate Pro and, after following a fully automated installation procedure, had the software up and running in about 10 minutes. The product was installed on an eServer iSeries Model 270 (2252) with 2 GB memory, 48 GB RAID 5 DASD, running OS/400 V4R5. This makes IGNITe/400 the first iSeries user of CommuniGate Pro.

Getting the Message Across

CommuniGate Pro has run error-free for IGNITe/400 since its installation. "We have not had a single bug and are amazed at how often enhancements and features are added to the product," Cancilla said. "At IGNITe/400, we live and breathe Internet technologies and absolutely love Stalker's support, which is done entirely via a CommuniGate Pro mailing list. The answers are timely and usually right on target."

A number of CommuniGate Pro's features were precisely what the doctor ordered for IGNITe/400. For example, the ability to create a searchable archive of the messages and topics that flow over the IGNITe/400 mailing list was important to the user group, and CommuniGate Pro's search engine allowed IGNITe/400 to archive and build such a knowledge base. In addition, because of CommuniGate Pro's robustness, IGNITe/400's monthly newsletter, approximately 4K in size, is now being sent out to more than 5,500 recipients in less than 5 minutes.

Cancilla and other group members have used the CommuniGate Pro's Web-based email interface while traveling, which has been a lifesaver when operating inside companies that allow HTML but have very restrictive policies regarding connecting to services such email.

The Web-based management facilities are used extensively by IGNITe/400 members to view current activity and monitor its logs. "This is a tremendous contrast to the IBM SMTP server where you have to find the logs. Or find out you didn't enable logging!" Cancilla said.

CommuniGate Pro also has a mail relay blocking feature, supports blacklists, and requires the unique proprietary authentication of users who are authorized to send out bound mail via the SMTP server. The administration facility for the product is HTML-based, as are the help text and documentation.

IGNITe/400 has upgraded to new releases three times since the group first began using the product, and the group is continuing to grow in membership and interest areas. For example, several special interest group mailing lists that will be managed by CommuniGate Pro have been planned, and the group also used an authenticated private mailing list to communicate with folks when it was planning its November 2001"e-Business eXtreme Conference" held in Minneapolis.

Ali Liptrot is the director of sales and marketing for Stalker Software. She has been involved in Internet messaging for more than six years and understands the communication needs of corporate, ISP, and educational customers. Ali can be reached via email at This email address is being protected from spambots. You need JavaScript enabled to view it.. 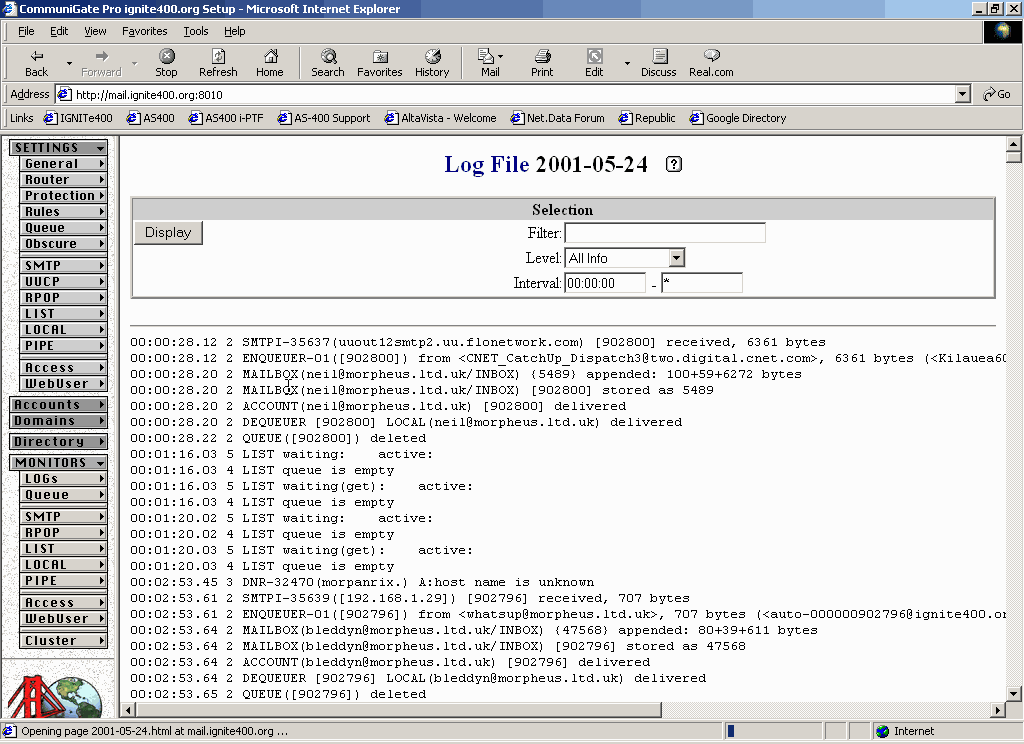 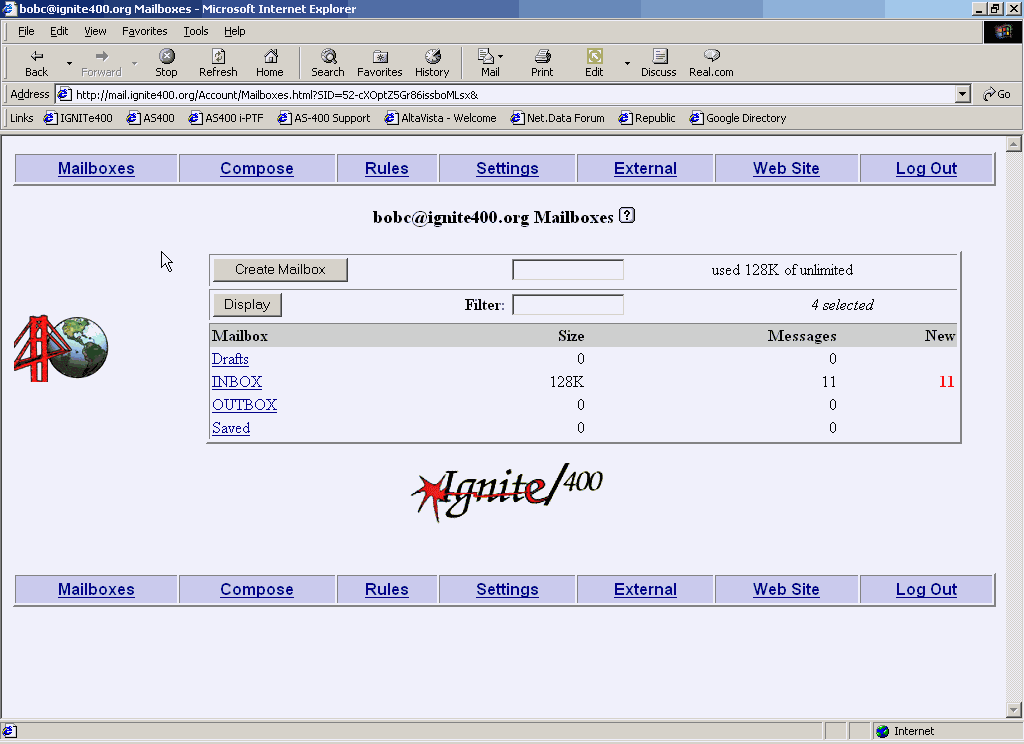