Many IT departments have had archiving on their project lists for some time, but it is continually bumped down the list by other items that are considered to be of a higher priority, such as new application development and bug fixes. Archiving is an administrative task that is seen as being on the "should do" list, but, because the business will still function without it—albeit, as described below, slowly and not in the most cost-effective manner—archiving never rises onto the "must do" list in some organizations.

Why does this matter? The obvious answer is that, despite the dramatic decline in disk costs over the past couple of decades, disk is still not free. Beyond that, there are performance implications to keeping more data on hand than necessary. Database backup tasks and batch jobs that run against the whole database take longer. Response times for online queries may also become unacceptable as the queries sift through excessive obsolete data.

Furthermore, more data is not always better than less data. Very old data may mislead business planners and strategists because trends are discontinuous. New product introductions by the company or its competitors, changing consumer tastes, new business models, new technologies, and other factors alter customers' buying behaviors, internal inventory flows, and other operating characteristics. Inferring and extrapolating trends using information that spans too long a time may be not only a slow process because of the volume of data, but also a misleading one.

Data Manager tackles this problem by moving old data from the primary database to either a secondary database on disk or off to tape. It is, in effect, an archiving engine. You provide it with a model that defines your databases and your archiving policies. On an ongoing basis, it then automatically archives data according those policies, without the need for operator intervention.

For example, you might tell Data Manager to move "old" data—data that is not needed on a regular basis, but which still may be required on short notice—from the primary database to a reference database on disk. You can also have it move "older" data from the reference database onto tape in order to reduce disk costs. Alternatively, you might set up just a single step from the primary database directly to tape. You define "old" and "older" in the model.

The "old" and "older" concepts are not as straightforward as they might seem. For example, you might want to archive all purchase orders more than three years old, but what does "three years old" mean? Standing purchase orders may be open for months or even years, and the various line items on one-time purchase orders may be shipped individually over a span of months. You don't want to archive an open purchase order or one that may still need to be referenced because it was filled only two months ago and it or the payment of it may still be open to dispute. Data Manager allows you to establish detailed archiving policies that accommodate these issues. For example, you can have it archive purchase orders that were created more than three years ago, but only if they are completely closed and nothing has been received on them for, say, at least six months.

Data Manager also honors all referential integrity rules. Even if a record meets all of the other archiving policies, Data Manager will not archive it if dependent records exist that are not scheduled for archiving.

To help ensure compliance with data security and management accountability regulations, Data Manager maintains a complete audit trail of all actions it performs. This audit log shows not only where Data Manager moved data, but also when and how the archiving criteria were changed over time.

ERP applications often provide purging and archiving features, but these features are usually not comprehensive, and worse, they normally require that the system be shut down while they run. In contrast, Data Manager provides comprehensive purging and archiving functionality. And Data Manager's processes can be run while systems are active. Many organizations find that this benefit alone delivers a return on their investment almost immediately.

Working with Data Manager is simple. First, you load the archiving model. Models have been built for most of the major ERP packages, including BPCS, MOVEX, System
21, World, and OneWorld, and a growing number can even be downloaded from Vision's Web site. These models can then be customized to accommodate your specific archiving policies and any tailoring that your organization performed on the ERP. Alternatively, models can be easily built from scratch.

This is not to suggest that Data Manager is only for environments running ERP software. Data Manager is entirely application-independent. Its archiving model is simply a means of defining files and links between files, archiving and purging policies that are to be applied to them, and identifying any unusual conditions that require exceptions to those policies. The model is completely independent and not directly aware of the applications that use the files that are included in it.

Archive Process Control functionality in Data Manager creates, in effect, development and test environments for the archiving model. You can build new models or modify existing ones in the development environment without affecting the purging and archiving activities going on in the production environment. Those activities continue to follow the policies in the existing, proven model. When you have finished creating or modifying a model and have thoroughly tested it, you can promote it to the production environment. Only then will the policies in the model under development replace those in production.

Data Manager can implement either two-tier or three-tier archiving models. All IT people are familiar with the two-tiered model. Under it, old data is sent to tape and deleted from disk. The archived data can be retrieved from tape if necessary, but doing so is a very long and, assuming the tape cartridge is not mounted in the drive or automated tape library, labor-intensive process. Consequently, old data is often not archived until the IT staff is fairly certain that it will never, or at least exceptionally rarely, be called for again. 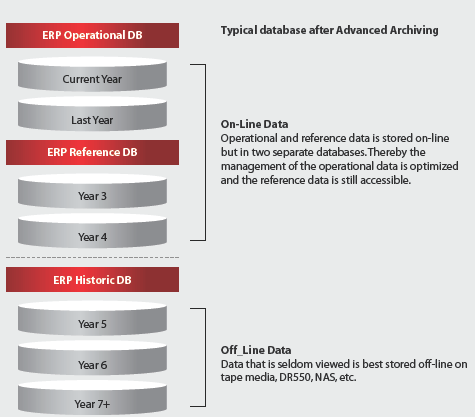 A three-tier model includes the option of archiving data to disk. For example, data that will not be needed for operational purposes but is still required for reporting and analysis purposes is archived to a reference disk rather than to tape. Doing so gets the data off the operational database so it doesn't slow down production applications but keeps it quickly available when needed for other purposes.

Older data, typically data that is obsolete but must still be kept for legal purposes or "just in case" is moved off disk completely and onto tape, just as it would be in the two-tiered model.
The three-tier model does not require that data always follow this two-step process. Depending on the nature of the data, you might specify that some of it is to move from the primary database to the reference disk once it reaches a certain age and then later onto tape, while other data may move directly from the primary disk to tape.

Data Manager allows you to copy data without deleting it from the primary database. This can be helpful when testing your model as you can defer the purging of production data until you are completely confident that the archiving rules are correct. Even then, there is no threat to your data as Data Manager allows you to easily restore archived data to the production database.

The ability to copy but not delete selected data provides an ancillary benefit. You can use this feature to easily create high-quality, up-to-date test databases with referential integrity fully intact. This allows developers to test new and updated applications under current real-world conditions.

Ease of Use and Administration

Vision Solutions has put considerable work into minimizing the administrative load required to install and run Data Manager. A simple, query-like interface allows you to model your purge and archive plan without the need for programming skills.

Data Manager is implemented in conjunction with Director, an integrated set of applications that proactively monitors, manages, and optimizes System i servers, databases, and application environments. By combining Data Manager with Director, you can free up more space by using the reorganization-while-active functionality, gain greater visibility into your System i, and keep your System i optimally tuned.

Data Manager and Director come with self-installing engines and, installed in this combination, they demonstrate their heritage in being built on the eight industry-standard pillars of autonomic computing as described below:

For more information about Data Manager, contact Vision Solutions at one of the addresses below.

Joel Klebanoff is a consultant, writer, and formerly president of Klebanoff Associates, Inc., a Toronto-based marketing communications firm. He has 30 years' experience in various IT capacities and now specializes in writing articles, white papers, and case studies for IT vendors and publications across North America. Joel is also the author of BYTE-ing Satire, a compilation of a year's worth of his columns. He holds a BS in computer science and an MBA, both from the University of Toronto. Contact Joel at joel@klebanoff.com.