The 15th annual conference drew more than 200 people for a day of educational sessions and IBM presentations.

The OCEAN User Group held its 15th annual Technical Conference last week and hosted in excess of 200 people who attended more than 30 educational sessions on the IBM i platform and related technologies.

Carole Comeau, OCEAN's past president and the board member responsible for organizing this year's vendor expo and hotel facilities, reported that the event attracted 170 users and 240 people overall after counting vendors, speakers, other board members, and members of the press. Some 31 IBM Business Partners bought space in the exhibit hall, selling out all tabletops before the conference's start. Attendees were given three periods of between 30 minutes to an hour to visit the exhibit hall and, according to vendors, made good use of the time. While this year's executive breakfast gained some traction at drawing more decision-makers to the event than prior years, the conference historically attracts mostly programmers, a fact that delights some vendors but confounds others who may have a different product mix.

The traditional exchange of business cards in a fish bowl for a chance at winning prizes at the end of the day continued to hold its appeal as vendors ramped up their giveaways to include Apple iPods, hundred-dollar bills, and expensive technical books to the delight of lucky recipients. This year saw a virtual MC Press bookstore instead of the usual tabletop display, with users being given a special OCEAN promotion code that they could use online at the MC Press Store.

Speakers came from across the country and included familiar names like Susan Gantner, Jon Paris, Pat Botz, Larry Bolhuis, Al Grega, George Farr, Joe Pluta, Sharon Hoffman, Jorge Sanguinetti, John Gay, Doug Mack, Craig Pelkie, Mike Pavlak, and John Earl. Speaker handouts were limited this year to save paper and were instead included on a CD given to attendees in their registration bag.

Jeff Howard, director of IBM Power Systems Offerings, gave the keynote speech to attendees at the group luncheon and delivered an earlier special briefing on IBM's green initiatives to a group of C-level management and the press, all of whom attended the special OCEAN executive breakfast. 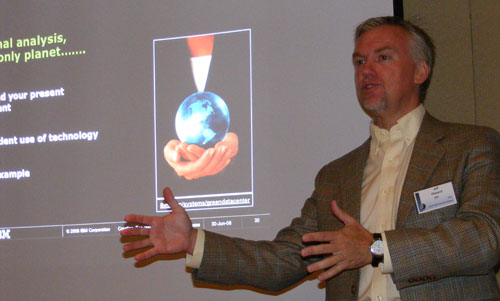 At the breakfast, Howard broke down IT's contribution to the mushrooming demand for power that is growing worldwide as civilization flies toward the flame of ever-increasing energy demand. He then outlined what IBM is doing to help address it. The message was clear that leading companies, such as IBM, should forge the way, and he encouraged other executives to investigate the impact--particularly in the area of cost benefits--that smarter energy management can have on energy demand. Through videos and a slide presentation, Howard explained IBM's corporate direction in relation to its green IT initiatives. Readers can learn more about IBM's latest energy-saving accomplishments at IBM TV.

Lunchtime diners were given a briefing on IBM's consolidation of the System i and System p into Power Systems and the benefits of virtualization through PowerVM. Howard presented video testimonials of customers, including Enterprise Rent-A-Car, that had upgraded to IBM Power System servers and realized significant benefits as a result, including greatly reduced energy consumption.

Howard referenced the 20th anniversary of the AS/400 that IBM employees celebrated in Rochester, Minnesota, last week and noted that the platform was extraordinarily rare, if not unique, in its ability to run the same software today that it could 20 years ago, thus protecting customers' investments in their business platforms and software.

George Farr, product manager for IBM i tools and compilers, described new bundles of Rational software tools now offered, including RDi, the lightweight, Eclipse-based development tool to edit, compile, and debug RPG, COBOL, and CL programs. He also went over the components in RDi SOA, the bundle for developers who need end-to-end Web and SOA solutions. RDi SOA, which comprises EGL, SOA, and Web tools, includes RDi plus the Rational Business Developer along with EGL. Farr also announced a new variation that is a Rational Java development tool being informally called RDi SOA for Java for developers who want to do advanced Java development. He also touched on the HATS tool (Host Access Transformation Services) for 5250 applications that can be used to build new Web applications from existing terminal ones.

Farr went over new license-pricing models for the WDS and RDi tools and compiler sets that reflect a more customer-friendly structure than previously announced, one designed to more fairly charge developers for those tools that they actually will use and not charge them for ones they don't need. He emphasized, however, that IBM believes it must charge users something for the tools in order to support future product development. He alerted the audience to special Rational software-server promotions going on this month that include valuable tool bundle giveaways with the purchase of entry-level Power Systems models. Customers can get further details from their IBM Business Partners.

Farr also summarized for the audience some of the enhancements to RPG IV in IBM i 6.1 (formerly i5/OS V6R1) that include local file support, enhancements to the use of files, higher size limits on variables from 64K to 16MB (and the length of string literals increasing from 32K to 16MB), the relaxation of some of the rules governing UCS-2 data types, the abilities to run multiple threads concurrently and to define a main procedure that does not use the RPG cycle, as well many other miscellaneous enhancements.

Farr mentioned IBM's next-generation Jazz platform for collaborative software delivery. Users can download Rational Team Concert (RTC), which extends team capabilities with integrated source control, work items, software configuration management (SCM), and the collaborative infrastructure of the Jazz Team Server. Rational Team Concert Express-C provides a complete collaborative development environment for small teams getting started with the platform, according to IBM. Team Concert Express-C can be used at no charge by the first three users in a company and can provide support for up to 10 users, the company says. IBM says it's a simple and easy installation and allows for quick adoption. More news on Rational Software is available at IBM TV.

While the keynote speeches and vendor expo provided sizzle for the conference, the real meal, and reason users attended, was the approximately 40 educational sessions presented in seven tracks and taught by speakers and trainers who are among the best working in the IBM midrange field. Among the sessions most heavily attended were "RPG Does XML" and "D-Spec Delights" as well as sessions on RPG and PHP. Attendees completed session evaluation forms similar to those distributed at COMMON, and feedback was positive, according to Margaret Matthews, OCEAN's speaker and volunteer coordinator.

Said Matthews: "Comments from attendees (either written on the conference evaluations or sent to me via email) regarding what we did well, included 'Everything!', 'The sessions and speakers,' 'Great lineup of speakers,' 'The conference was great. We brought a lot of useful information back to our shop,' and 'Great sessions and topics.'"

Conference Chairman and OCEAN President Bob Langieri of Excel Technical Search said he wished to express his appreciation to IBM for its support of the conference (by allowing Howard and Farr to address the group), to the vendors who subsidized much of the cost, to the users and their management who believed in its benefits, and to the volunteers and board members who gave dozens of hours to help organize the conference. In addition to Carole Comeau, of Comeau Consulting, these included Jorge Sanguinetti of Apria HealthCare; Margaret Matthews of Margaret Matthews Consulting; Lewis Libman of Prescription Solutions; John Kienstra, director of infrastructure and networking, Vision Solutions; Perry Mills of iTec400 (an IBM Business Partner); Xavier Martinez, consultant; Peter Turnquist, the group's IBM liaison; Nirupa Patel, hospitality chairperson; Dennis Fletcher of Fletcher Consulting; Kim Hayes, programmer; and consultants Vidya Sapre and Curt Aldersen, as well as Anne Martinez, who with Fletcher, Sapre, and Alderson were volunteers. 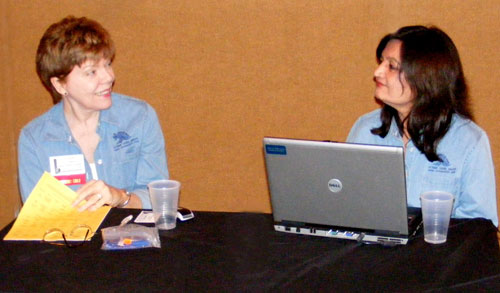 Carole Comeau and Nirupa Patel of OCEAN get ready for the gift raffle. 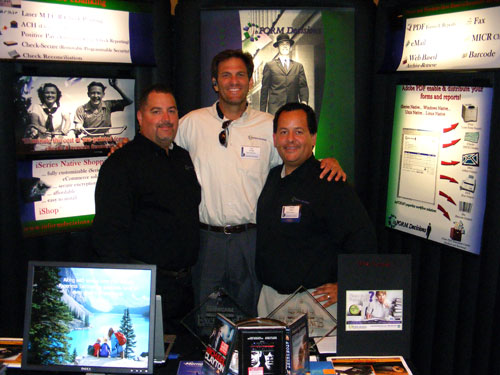 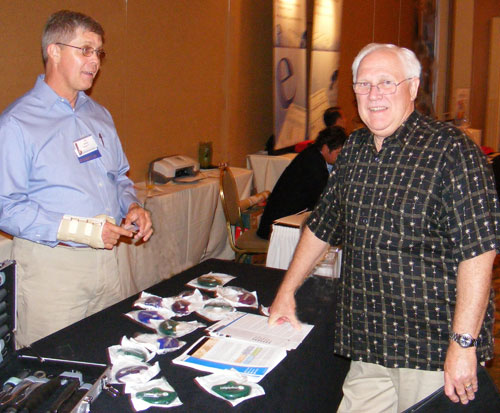 Joe Jepsen of Meridian IT catches up on old times with Curt Schwinck, president of CLS Enterprises, an IBM Business Partner. 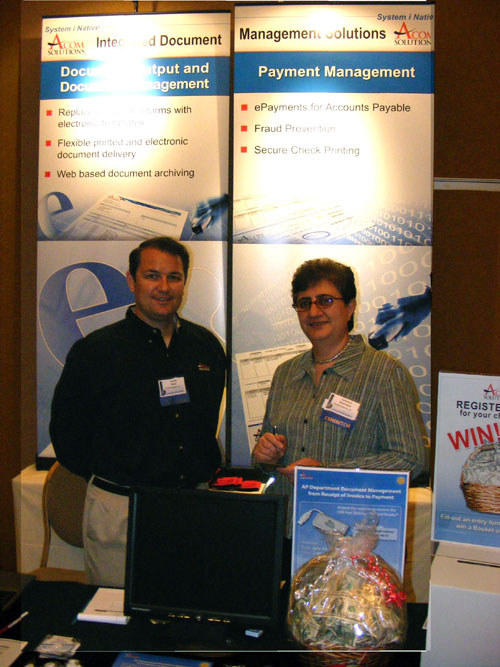 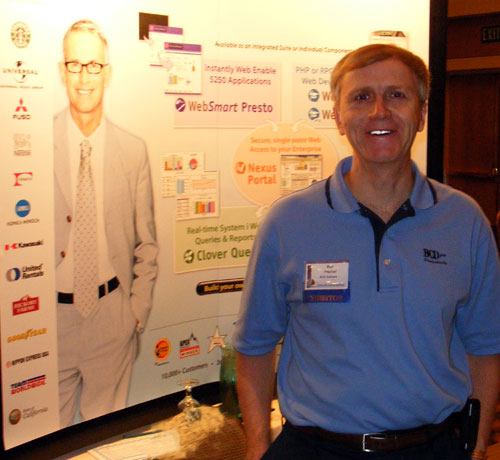