Last Monday, a federal judge rang down the opening gavel in the antitrust lawsuit that the United States Department of Justice (DOJ) filed against Oracle Corporation. That lawsuit seeks to block the software vendor from acquiring its long-time rival, PeopleSoft. While nobody knows how the judge will ultimately rule in this case, one thing is certain. The lawsuit is sucking other IT vendors into its vortex and leading them to act in ways that are making the enterprise applications market an increasingly complicated place.

To understand why this is happening, it helps to know the arguments that the DOJ and Oracle are leveling against each other in court. As the DOJ sees it, three vendors dominate the market for enterprise applications: SAP, PeopleSoft, and Oracle. While many niche vendors also have a share of the market, they can rarely meet the complete needs of large and medium-size corporations. This forces such companies to choose from the "Big Three." Reducing that group to two vendors would severely reduce competition and lead to high software prices.

In response, Oracle is arguing that the DOJ has not properly defined the enterprise applications market. It points out that several niche vendors have significant shares of specific industries and geographic regions. The company is drawing upon market share statistics--such as that shown in the following graph--in an attempt to prove its point. It also argues that Microsoft intends to compete with the Big Three by selling its enterprise applications to large and medium-size firms, and that this competition will lead to lower software prices. 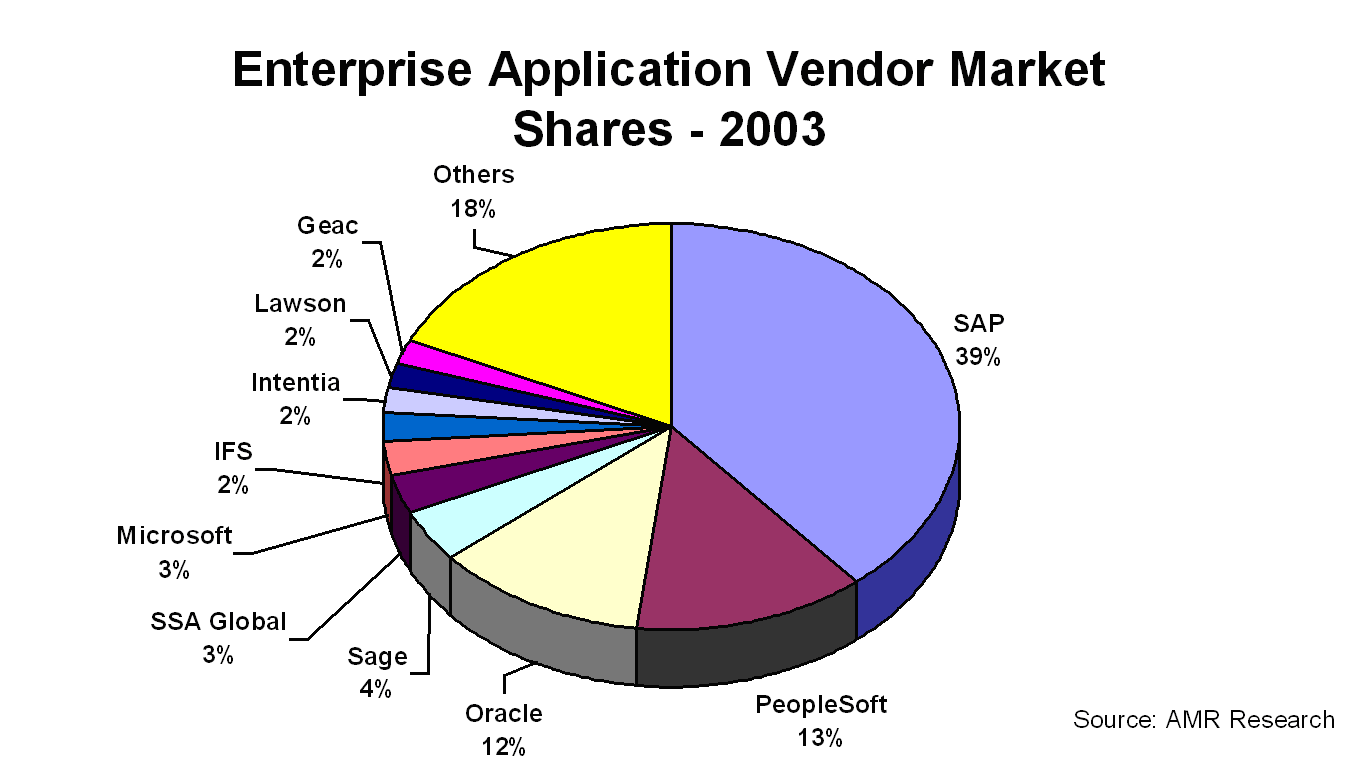 While many IT analysts and observers are arguing over whether Oracle or the DOJ are right, I do not intend to take sides in this article. Suffice it to say that in my opinion, there are industries and regions that the Big Three have locked up and others that remain open to additional vendors. However, what really interests me about this legal battle is the way in which other IT vendors are responding to it. Those responses could have just as great an impact on the enterprise applications market as the legal battle itself.

Let's start with Microsoft. Three months ago, the vendor gave the DOJ a sworn statement that it has no plans to sell core business applications to large customers over the next two years. That statement supported the DOJ's assertion that an Oracle-PeopleSoft merger would reduce the Big Three to two vendors who would face no competition from Microsoft. Last Monday, however, Microsoft revealed that it approached SAP in late 2003 about a potential merger. While Microsoft broke off those discussions a few months later, its revelation sends a clear signal about its desire to become a much larger enterprise applications vendor. That signal supports Oracle's argument.

For its part, SAP is taking actions that help to make Microsoft part of the enterprise applications space. In mid-May, the German software vendor announced that it would collaborate with Microsoft to make SAP applications integrate easily with solutions based on Microsoft's .NET development platform. The two firms also agreed to work together on product integration, to collaborate on marketing, and to cross-license some patents to each other.

Interestingly enough, SAP is testifying on Oracle's side along with several other enterprise application vendors. They include SSA Global Technologies, Lawson, and Siebel. By contrast, IBM is providing witnesses to both litigants.

What are software customers to make of all these machinations? While I have no inside knowledge about the motives of these vendors, I will offer some observations about what those motives might be.

First, let's consider Microsoft and SAP. Neither vendor sees the other as a competitive threat over the next several years. However, both vendors compete with PeopleSoft and Oracle. SAP competes with both firms in large accounts, while Microsoft competes with them in smaller accounts. Would either firm benefit from an Oracle-PeopleSoft merger? Not in the least, as they would both face a larger competitor. Then again, neither firm would benefit if Oracle gave up its hostile takeover bid, as that would allow both it and PeopleSoft to refocus on competing with SAP and Microsoft.

Given these market dynamics, the best outcome for SAP and Microsoft is to keep Oracle locked in its battle with PeopleSoft and the DOJ. Why? Because it spreads fear and uncertainty among PeopleSoft customers and keeps Oracle from focusing on its customers. That allows SAP and Microsoft to win customers from both vendors and expand their spheres of influence. It also gives smaller vendors--such as Lawson and SSA--an opportunity to reach out to Oracle and PeopleSoft customers while facing less competitive pressure.

I am not saying that these considerations are behind the actions of any particular vendor. However, if I were an executive at SAP, Microsoft, or a small enterprise application vendor, I would certainly have these considerations in mind. And what if I were an executive at IBM? In that case, I would be trying my best not to take sides with any application vendor. Since IBM relies on application vendors to sell its products, it tries to maintain cordial relationships with nearly all of them. This may explain why IBM is providing witnesses to both sides in this legal battle. Even if it cannot dodge the debate, it can offer a balanced point of view that is minimally offensive to all the concerned parties.

In the end, however, the struggle between Oracle and PeopleSoft will likely become one of those epic battles that forces nearly every vendor to ally itself with one of the combatants. Some of those alliances will never become public, but they will exert their influence from the private conversations and secret memorandums that spawn them. That will make it important for the rest of us to watch our vendors closely, observe what they do, and decide what those actions could mean for our businesses.

Lee Kroon is a Senior Industry Analyst for Andrews Consulting Group, a firm that helps mid-sized companies manage business transformation through technology. You can reach him at This email address is being protected from spambots. You need JavaScript enabled to view it..