What would you call a device that stores data as a series of small holes on a rectangular medium? A punch card, right? No no, nano-techies! Welcome to the Millipede project--an IBM storage research initiative that on June 11, 2002, announced in Zurich, Switzerland, that its scientists had demonstrated a data storage density of a trillion bits per square inch--20 times greater than the densest magnetic storage available today. However, the Millipede project doesn't use a magnetic or electronic means to store this data. Instead, Millipede employs thousands of nano-sharp tips to heat and punch indentations representing data bits into a plastic film.

The Millipede terabit demonstration employed a single "nano-tip" making indentations only 10 nanometers (a millionth of a millimeter) in diameter. Though the concept has been proven with an experimental setup using more than 1,000 tips, the IBM research team is now building a prototype, due to be completed early next year, which will deploy more than 4,000 tips working simultaneously over a 7-mm-square field. Such dimensions would enable a complete high-capacity data storage system to be packed into the smallest format used now for flash memory.

Millipede uses a two-dimensional array of v-shaped silicon cantilevers that are 0.5 micrometers thick and 70 micrometers long. The end of each cantilever is equipped with a tip that is pointed downward less than 2 micrometers long. The current experimental setup contains an array of 1,024 cantilevers (32 x 32) that is 3 mm by 3 mm. This array was created by silicon surface micromachining. Using a sort of time-multiplexing electronic signal, similar to that which is used in DRAM chips, each cantilever tip is addressed individually. Bits are written by heating a resister built into the cantilever to a temperature of about 400 Celsius. 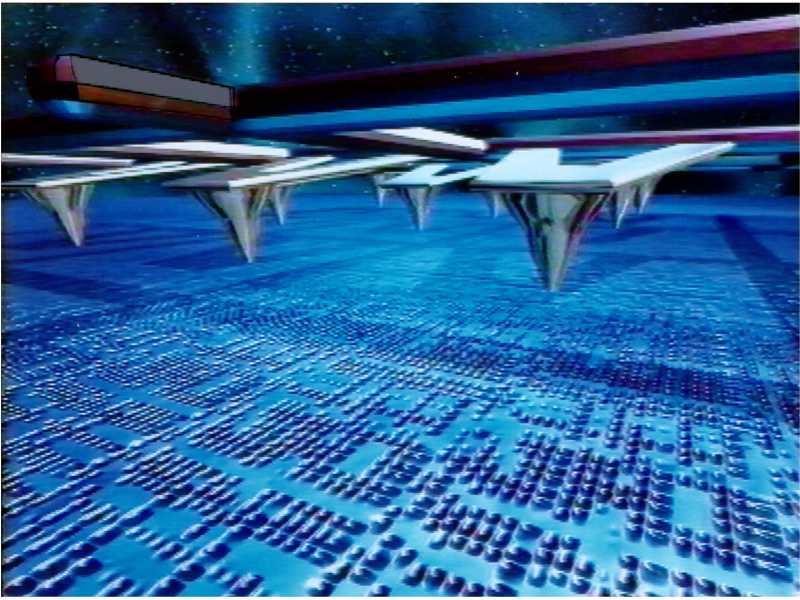 The hot tip softens the polymer storage media beneath the array of cantilevers, making an indentation. When the device reads a bit, the resister is operated at a lower temperature--about 300 Celsius--and the tip is dropped into the indentation. The resister is cooled by the resulting better heat transport, and a measurable change in the resistance of the cantilever tip occurs.

The polymer storage media itself is precisely moved beneath the array of cantilevers in both x and y directions, enabling each cantilever tip to read and write within its own storage field of 100 micrometers on a side. The short distances of movement help ensure low power consumption.

The polymer media differs considerably in its functionality than the old punch card format in that it's been demonstrated to sustain more than a 100,000 write/over write cycles. To over-write data, the cantilever tip makes a series of offset pits that overlap so closely that their edges fill in the old pits. 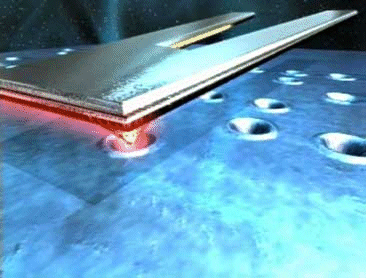 The data rates of the individual tips are currently limited to the kilobits-per-second range, which restricts the storage transfer rate to only a few megabits per second for the entire array. However, IBM believes that faster electronics will allow the cantilevers to be run at a considerably higher rate. Initial nanomechanical experiments done at IBM's Almaden Research Center showed that individual tips could support data transfer rates as high as 1-2 megabits per second. The rate at which data is transported severely affects the power consumption. However, Millipede is expected to consume about 100 milliwatts at data rates of a few megabits per second--a rate of consumption that is in the range of flash memory technology and much lower than magnetic recording.

While flash memory is not expected to surpass 1-2 gigabytes of capacity in the near future, Millipede technology could pack 10-15 gigabytes of data into the same tiny format without requiring more power for device operation. IBM scientists also believe that still higher levels of storage density are possible. "Since a nanometer-scale tip can address individual atoms, we anticipate further improvements far beyond even this fantastic terabit milestone," said Nobel laureate Gerd Binnig, an IBM Fellow and one of the drivers of the Millipede project. "While current storage technologies may be approaching their fundamental limits, this nanomechanical approach is potentially valid for a thousandfold increase in data storage density."

"The Millipede project could bring tremendous data capacity to mobile devices such as personal digital assistants, cellular phones, and multifunctional watches," says Peter Vettiger, Millipede project leader. "In addition, we are also exploring the use of this concept in a variety of other applications, such as large-area microscopic imaging, nanoscale lithography, or atomic and molecular manipulation."

The demonstration of a terabit capacity of the Millipede project comes on the heels of IBM's announcement that it has sold the majority of its disk drive storage operations to Hitachi on June 4, 2002. IBM says that it will be at least 2005 before a commercial version of Millipede might be available. Like most IBM research announcements, the Millipede demonstration was designed to shore up its image on the stock exchange as a pure technology company, showing that it is putting its R&D dollars squarely in line with the future of computing. However, the practicality of projects like Millipede still has a long way to go before a commercial application can be achieved. Similar excitement was once accorded to announcements of advancements in bubble memory technology, but that technology proved too complex and expensive for general commercial use and was eventually superceded by DRAM technology.

Yet, with IBM bowing out of the magnetic storage industry, technologies such as Millipede might be just what the company needs to blaze a new trail into the future. Millipede offers higher density storage with a broader potential bandwidth and with a more electronically stable footprint. How this technology might be made manifest in the future of large-scale computing is still open to speculation.

What is ironic is that the concept of storing bits of information on a medium like the polymer film has sent IBM back to its roots to a time when Herman Hollerith developed a punch card machine in 1884 for the United States census of 1890. That technology itself borrowed heavily from the Jacquard loom that revolutionized weaving during the industrial revolution in 1840. Hollerith's invention of the punch card data recorder created a demand for data storage equipment that eventually launched the organization that we know today as IBM.