Did you ever wonder what will happen to all the advanced technology that IBM has created over the years, after it's reached its maturity? Hang on, because we're all about to find out.

Last Tuesday (June 4, 2002), IBM informed the world that it was leaving the disk drive business and selling the majority of its disk drive holdings to Hitachi, Ltd. According to the announcement, Hitachi has agreed to purchase the majority of IBM's HDD-related assets for $2.05 billion, which includes the transfer of IBM's HDD-related intellectual property portfolio to the new organization. Hitachi will initially own 70% of this new company and will make a series of fixed payments to IBM before assuming full ownership after three years. In a separate negotiation, IBM and Hitachi are creating a multi-year alliance to research and develop open technologies for the next generation of storage networks, systems, and solutions. 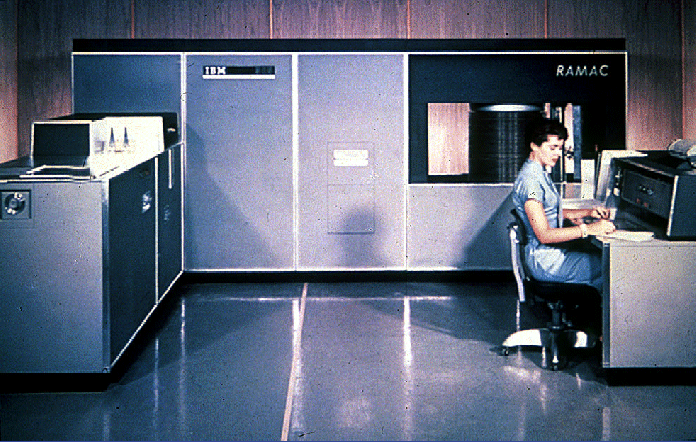 The first RAMAC disk drive was 4 feet by 5 feet with a capacity of 5 MB.

The RAMAC Invented the Paradigm of Randomly Accessing Data

In 1956, IBM created the Random Access Method of Accounting and Control (RAMAC), which consisted of fifty 25-inch disks with a total capacity of about 5 MB. This was the machine that started the hard drive industry, and over the succeeding years, IBM continued to advance the technology through its introduction of newer, more advanced technologies:

1962--Air Bearing Drive Heads: The Model 1301 disk drive was the first drive to use air bearing drive heads. This technology lowered the flying height of the heads to 250 micro-inches. The result? The Model 1301 had a 28 MB capacity on half as many heads as the original RAMAC, and both aerial density and throughput increased by about 1,000%.

1965--Removable Disk Drive: The Model 2310 was the first disk drive to deploy a removable pack of disks.

1966--Ferrite Heads: The Model 2314 was the first drive to use ferrite core heads, a technology that defined the process of reading and writing data magnetically for a generation of disk drives. When writing data, the current in a coil of wire created a polarized magnetic field in the gap between the poles of the core, which magnetized the surface of the platter where the head was located. When the direction of the current was reversed, the opposite polarity magnetic field was created. For reading, the process was reversed: The head was passed over the magnetic fields, and a current of one direction or another was induced in the windings, depending on the polarity of the magnetic field.

1973--Winchester Drive: Perhaps the most celebrated piece of IBM disk drive technology, the Model 3340 drive contained a number of integrated technologies that defined the disk drive industry throughout the 1970s. The Winchester drive was the device that is credited with making the first relational databases (such as DB2) affordable. Code named "The Winchester" after the 30/30 rifle, the original drive had two spindles with a 30 MB capacity in each and a 30 millisecond access time.

1979--Thin Film Heads: The Model 3370 was the first disk drive to use thin film heads, a technology that used a substrate wafer coated with a very thin layer of alloy material in specific patterns. This thin film process produced a very small, precise head whose characteristics could be carefully controlled and allowed the bulky ferrite head design to be completely eliminated. Thin film heads were capable of being used on much higher density drives and with much smaller floating heights than the older technologies.

1979--Eight Inch Disk Drive: The Model 3310 was the first disk drive that reduced the size of the disk platters from 14 inches to fit an 8-inch form factor.

1990--MR Heads and PRML Data Decoding: The Model 681 (code named "Redwing") was the first disk drive to use magnetoresistive (MR) heads and Partial Response, Maximum Likelihood (PRML) data decoding. MR head technology (the key technology used today to provide us with disks over 1 GB in size) employs a special conductive material that changes its resistance in the presence of a magnetic field. As the head passes over the surface of the disk, this material changes resistance as the magnetic fields change corresponding to the stored patterns on the disk. A sensor is used to detect these changes in resistance, which allows the bits on the platter to be read. The Model 681 used the MR heads along with PRML data decoding, a technology that changed entirely the way that the data signal is read and decoded from the surface of the disk. Instead of trying to distinguish individual peaks to find flux reversals, a controller using PRML employs sophisticated digital signal sampling, processing, and detection algorithms to manipulate the analog data stream coming from the disk (the "partial response" component) and then determine the most likely sequence of bits this represents ("maximum likelihood").

1991--Thin Film Disks: The "Pacifica" mainframe drive was the first to replace oxide media on the disk platter surface with a thin film media. Compared to oxide media, thin film media is much more uniform and smooth. It also has greatly superior magnetic properties, allowing it to hold much more data in the same amount of space. Finally, it's a much harder and more durable material than oxide and, therefore, much less susceptible to damage.

The scope and the range of IBM's contribution to this industry cannot be overstated. For instance, in 1980 IBM introduced the 3380 disk drive. It weighed 550 pounds and sold for $40,000. It was the first 1 GB disk drive in the industry. Twenty years later, in 2000, IBM introduced the 1 GB Microdrive--a device that cost less than $500 and was the size of a matchbook. 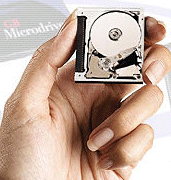 IBM Microdrive is 1 inch by 1 inch with 1 GB capacity.

Today, two years later, the Microdrive costs about $250, and 2.5-inch disk drives with a capacity between 20 and 40 GB can be had for less than $100. This precipitous drop in the cost of storage has plunged IBM into race to the bottom, as disk drives become commodity items that are, in fact, nearly disposable.

Yet, until Tuesday's announcement, IBM was still regularly receiving the lion's share of awards for its technology within the industry. This included the National Medal of Technology in 2000, and industry and consumer awards through the year 2001.

Nick Donofrio, IBM's Senior Vice President, Technology and Manufacturing, said at the announcement, "We are moving quickly to occupy the strategic areas in the technology and storage marketplace. At our core, we are a technology company, and we will continue to focus on leading-edge products, such as our copper technology, and move away from maturing technologies, and align our operations to meet that shift in demand. The actions we are taking now will better position IBM in areas where there is both long-term growth and profitability."

Meanwhile, the new company under Hitachi's ownership will be headquartered in San Jose, California. The new organization will bring together approximately 24,000 employees--about 18,000 from IBM and 6,000 from Hitachi--with major manufacturing operations at 11 locations around the world. Certain undisclosed IBM HDD operations were not included in the deal.

"The purchase of IBM's HDD business brings us the valuable business assets required for long-term success in this highly competitive market," said Masaaki Hayashi, Senior Vice President and Director, Hitachi, Ltd. "By combining HDD research, development, manufacturing, marketing, and sales into an independently operating company, we are creating a new industry leader fully focused on the $20 billion disk drive market. This new company is uniquely positioned for success by its broad customer portfolio, its unparalleled technological capabilities, and its strong position in key growth markets, including storage-intensive consumer electronics."

"Customers will benefit from the increased efficiencies of the new company and its ability to quickly bring advanced technologies and products to market," said John E. Kelly III, Senior Vice President and General Manager of IBM's Technology Group. "The singular focus on the HDD business will provide employees with the dedicated resources necessary to fully apply their industry-leading expertise to developing new HDD technologies and market opportunities."

Indeed, we may benefit in the long run, but in the short run, the idea of running our databases on non-IBM technology still gives us pause. IBM proved that randomly accessed magnetic storage could be made safe, affordable, and efficient. Watching it move on to other potentially more profitable technologies is truly a sign of a new era within the world of IT.

For a more complete look at all of IBM's contributions through the 20th century, download IBM's Flash presentation "A Century of Innovation."