John Earl writes to us: "What is the secret behind Windows XP? Could it really be pre-1995 IBM technology in disguise?" John found the following Web page here. (For a closer look at the photo, see Figure 1 below.) 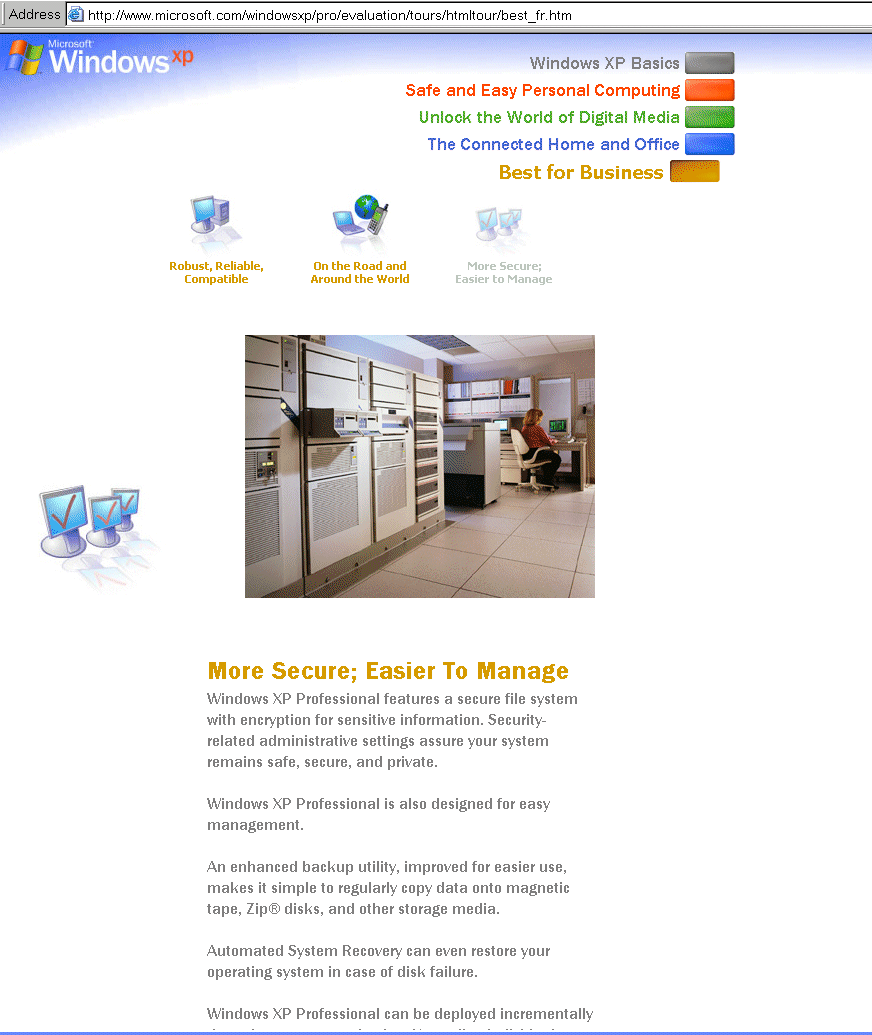 "You are treated to a rack of AS/400 equipment, a raised floor, a green-screen terminal, an old green-bar printer, and a raft of printed manuals that appear to be of the V2 vintage," John continues. "The AS/400 is probably a vintage D model, judging by the Malcolm Baldridge quality award banner, which was plastered onto the old D models beginning in 1991."

Evidently the Microsoft Web designer thought that rack-mounted AS/400s represented the kind of image that Microsoft needed to promote when talking about security and ease of use.

John writes: "At least when it comes to truth in advertising, 'More Secure; Easier to Manage' does more accurately describe the old AS/400 than the new Windows XP."

We wonder how long it will be before Microsoft realizes it made a slight faux pas and replaces the image with something less proprietary. 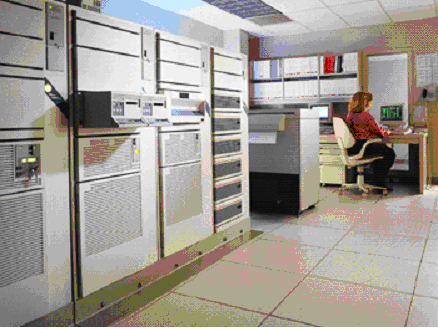 Figure 1: A secure Windows XP shop? A picture is worth a thousand words!

Meanwhile, Microsoft has announced it will release a beta of its first service pack for Windows XP later this month. The service pack contains a variety of fixes and some new features too. Microsoft says the service pack will be the first changes that bring the Windows XP operating system into compliance with the government's consent decree.

Many patches within the service pack are technical fixes derived from Microsoft's Trustworthy Computing Initiative--fixes that aim to plug outstanding security holes in the product. But this is only the beginning, and Microsoft says it will continue to include newer security fixes to the beta version right up until it ships to manufacturing later this summer. The patches are largely the result of the code review that the Windows division undertook for the Microsoft Trustworthy Computing Initiative. However, the company is also adding new features to XP that include support for USB 2.0 and .Net Framework options. Other new features include support for Free Style, Tablet PC, and Mirror devices.

More significant than the new features and functions, however, is how Microsoft is changing XP to comply with court mandates that were the result of Microsoft's anti-trust battles and the subsequent consent decree. Those mandates are designed to give users, software developers, and OEMs more flexibility and choice in configuring XP's "middleware products" such as Media Player and Internet Explorer. This includes documenting APIs between Microsoft middleware and the internal Windows operating system, and licensing protocols so other vendors can create compatible implementations.

Despite the court's mandate to Microsoft as described in the consent decree, many analysts who have reviewed the upcoming beta are still skeptical that the new API documentation and middleware protocol licensing really levels the Windows playing field. Meanwhile, the court battle between Microsoft and those nine remaining states plus the District of the Columbia that did not sign onto the consent decree continues. The outcome of that legal conflict could result in Microsoft's being forced to create a stripped-down version of Windows that would allow third parties a better means of interfacing their products.

Support for UnitedLinux from IBM

On the IBM front, Big Blue announced on May 30 that it's throwing its support behind a new uniform version of Linux called UnitedLinux, saying that it will make this version available across its portfolio of key hardware, software, and services offerings. The purpose of UnitedLinux is to create a unified version of the open-source platform, making it easier for businesses and hardware/software vendors and Business Partners to standardize. Currently, with so many slightly differing versions of Linux available--Red Hat, Caldera, Conectiva, SuSE, TurboLinux and others--customers and vendors must often port their applications from one version of Linux to another.

Four of the leading distributors of Linux--Caldera, Conectiva, SuSE, and TurboLinux--have initiated the UnitedLinux project with IBM's support. Meanwhile, despite its backing of UnitedLinux, IBM says that it will continue to provide support to Red Hat Linux across its key offerings.

The UnitedLinux initiative is open to every Linux version around the globe. The code base will be unified, and each vendor will simply add to the base its own proprietary or additional software. UnitedLinux is slated only for the enterprise, so each contributing member company will still be free to continue to develop its own desktop distribution independently.

Several other software and hardware vendors have voiced support. These vendors include AMD, Hewlett-Packard, and Borland. For more info, visit the UnitedLinux Web site.

Will iSeries Linux Heat Up?

How Linux will ultimately affect the fortunes of the iSeries remains an issue ripe for speculation. Will it really take off, consolidating office server services on the iSeries for midmarket companies? Or will it join the ranks of those IBM offerings that hold great technical promise but find few customers to embrace it? While there is no question that Linux is here to stay, there is ample room to debate whether Linux on the iSeries will significantly expand the number of customers who use the iSeries.

For instance, IBM's iSeries white paper "Linux on iSeries" by IBM's iSeries Linux project manager Craig Johnson gives a good technical overview of the capacity of the iSeries to run Linux, but little or no rationale as to why a company might want to do so. When 98% of the world is running MS Office products, it seems that no one is pulling together a reasonable business argument to run anything else. And if a company is running MS Office, why should it consider running anything other than Windows NT/2000 as the Office server? Until such a debate is joined, who cares how many Linux users can simultaneously run against an iSeries? It's like angels dancing on the head of a pin.

So what would a good business argument for Linux look like to a business manager? In this time of economic disruption, cost has got to be an integral part of the equation. Yet, there is little information available that compares the cost of running a consolidated server farm on Linux to the cost of running any sort of server farm--consolidated or otherwise--with Windows NT/2000. Likewise, arguments that stress return on investment (ROI) are exceedingly scarce in the literature of the industry. This leaves the brunt of any persuasive debate to the question of "availability of applications" and the question of "reliability of service." But in today's depressed IT market, those "big picture" arguments won't receive much attention: Cost remains the driving force. And, as a result, some companies may find the budget to play around with Linux on a PC server, but few mid-sized organizations will set out to migrate existing Microsoft server farms to Linux, and fewer still will likely purchase an iSeries to consolidate all of their MS servers.

The Linux End-User Revolution Is Still Waiting to Happen

Though some progress continues to be made to win customer and user support, there's little indication that any real wholesale revolution toward Linux is occurring. For instance, IBM's Craig Johnson is on record saying that more than 100 iSeries customers are trying out iSeries Linux in pilot projects. So far, these have been small- and mid-size businesses on smaller systems like the iSeries Model 270s and 820s. And on the end-user level, products such as CrossOver Office from CodeWeavers allow customers to run Windows 97 and Windows 2000 editions of Word, Excel, PowerPoint, and Outlook--and Lotus Notes 5--on Linux desktops. (No Windows XP support is currently available.) If end users take to Linux because it is more reliable or less expensive than Windows, then perhaps some real momentum for Linux will be finally realized.

Still, Windows XP sales skyrocketed in the first quarter of 2002, and there seems no end in sight to Microsoft's monopoly on desktop operating and PC server operating systems. Until that monopoly is relinquished, Linux will probably continue to remain an "initiative" that garners interest but sparing support from IT management. And iSeries Linux will represent an opportunity that few organizations can easily and economically embrace.