This article is an excerpt from the book Fundamentals of Technology Project Management (Second Edition) published in September 2012 by MC Press.

Is there a social media/virtual communication generation gap? I would say that the answer is yes. This does not mean that I think one generation is more adept with the tools than another. The adoption rate of the various social media tools differs between generations. What is considered good etiquette for one generation may be quite different for another. The cultural effect of social media also differs between generations. In general, different generations use social media in a slightly different way. One way is not necessarily better than another. However, in a professional environment, it is important to ensure that team members are using appropriate tools and using them in a professional manner. If you are aware of the differences in how your team members use social media, you can help them learn from each other. This will increase communication effectiveness for your entire team.

As much as I prefer not to make generalizations when it comes to technology and age groups, it is important to recognize that there are a few distinct differences. Mostly these differences stem from how and where we began our use of technology and gadgets. If you are from a pre-text/pre-Internet generation, imagine how differently you would perceive the world if what you think of as new technologies were the way things had always worked. Likewise, if you are from a younger generation, imagine how different your life would be without computers, mobile phones, iPods, texting, Facebook, and YouTube. Thinking about how different the world is today from how it was ten, twenty, or thirty years ago can help you understand why different generations view and use virtual communication tools and social media differently.

Today's younger generation doesn't remember a time when changing channels on the TV required getting up off the sofa and pushing a button on the television set. They have always been able to research homework using the Internet rather than going to the library and checking out a book or looking through the huge encyclopedias that Grandma had been collecting for ten (or fifty) years. They have never had to be at home to receive a phone call or be in the same room to participate in a meeting.

The younger generation has been immersed in virtual communication for as long as they can remember. 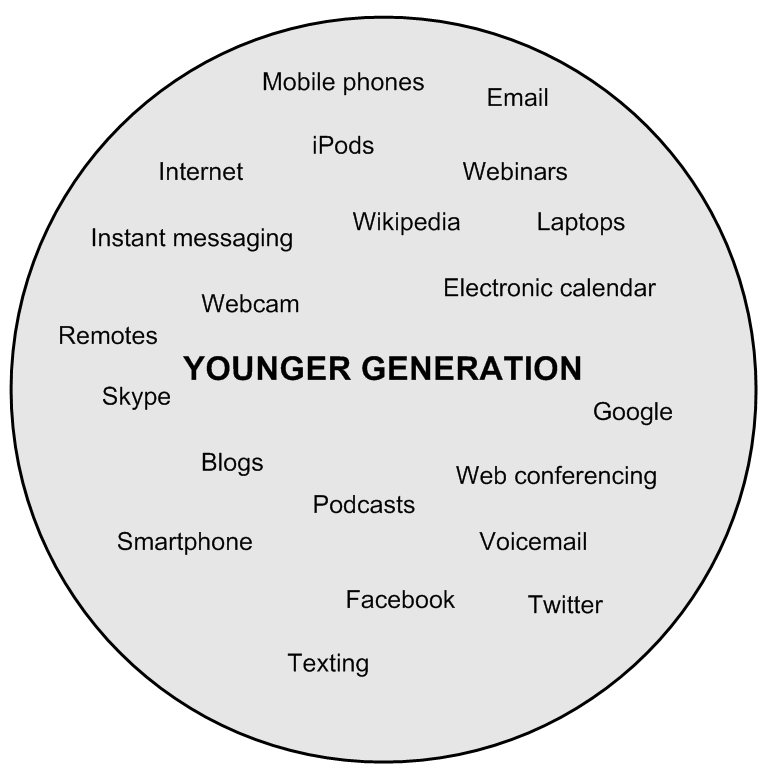 Email, instant messaging, and text communications have been standard methods of communication since before most of them were born. They are confident and comfortable using social media in their everyday lives. They eagerly await the release of the newest platforms and tools and can't wait to tweet about it! You are less likely to find resistance to introducing new technologies into the workplace from these employees, but you are more likely to encounter challenges with appropriate use of those tools. When a person is used to constantly texting or communicating virtually with their friends while participating in other activities, they can develop an inability to focus on one thing for more than a few minutes. In their personal lives, this may be okay. In a professional environment, it can result in employees who do not listen well, do not pay attention in meetings, and continue to text and email on their smartphones when they should be paying attention to what they are supposed to be doing. Even if the emails and texts are work related, it is not appropriate to be distracted by those things when they should be focused on something else.

The older, pre-electronic?communication generation, on the other hand, learned to communicate primarily face-to-face. They grew up in an environment with much fewer distractions. As children, they interacted with their friends in person. They played games outside in the street. When it was time to come home, their parents would come outside and call them in. They didn't have computers at home or at school. There was no Internet access, video games, or mobile phones. If they had a phone in the house, they were likely not allowed to use it to call their friends! If they wanted to speak to a friend about something, they would either visit their house to speak in person or wait until the next day and speak to them at school. Homework was handwritten. Research was conducted at the library. Written communication with distant friends or relatives was by letter. It might take a week or more for the letter to be delivered by the post office. Then you had to wait a week or more to get a reply. There were mailboxes and public telephone booths every few blocks. Life with much less electronic communication was very different. 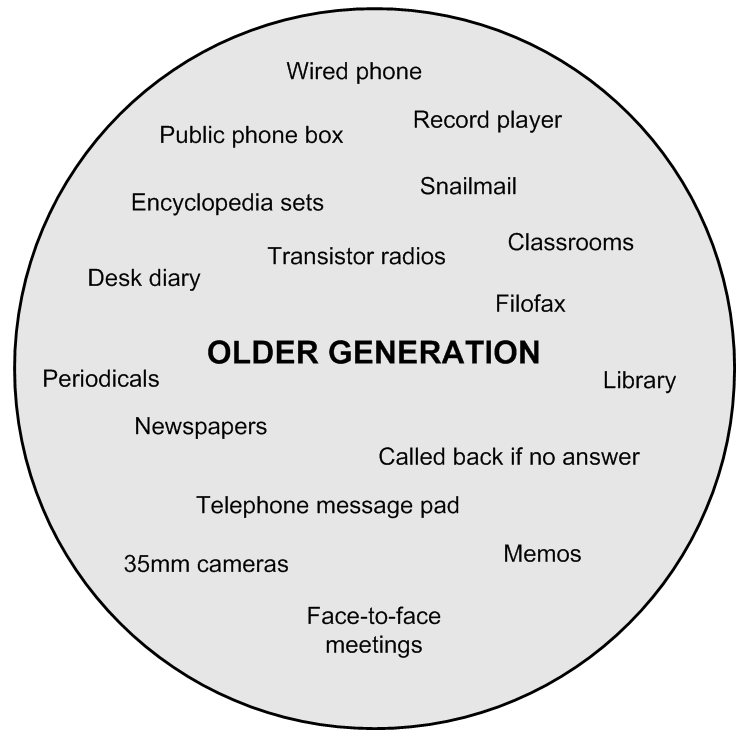 The idea of being "contactable" at all times and your location being trackable via satellites would have been something from a sci-fi movie. Some not-so-old older generation people were born before such things as microwave ovens, fax machines, and cordless phones were invented. They have seen huge technological advancements in their lifetime. Those who work in the technology field have learned everything they know about technology since they became adults. The technologies they use had not been invented at the time they were at school and university. Imagine a world where everything has changed in a few short years and you have to try to keep up with it all. This is why the older generation has a different perspective on technology. They experience it differently because they knew how the world worked without it. They may value it more at the same time as fearing it a little more. They may reminisce about "the good old days," but they also appreciate how different the future will be and how quickly things will change.

The older generation had a lot fewer distractions during school, college, and early work experiences than is generally the case today. They were not distracted by others' mobile communications or their own. When in meetings, they couldn't receive messages or carry on real-time written (or verbal) conversations with people outside the room. Fewer distractions made it easier to pay attention. It was expected that for the most part workers would be focused on one thing at a time and not continually multitasking. As mobile communication was not possible, there was no expectation that workers be contactable at all times. It was okay not to respond to a message within two minutes. In some ways, life was much simpler. In other ways, it was more complicated and frustrating because it could take such a long time to get things accomplished!

Part two of "The Generation Gap" will be published in an upcoming issue of MC Power Technology Manager.