Editor’s note: In this article, I’ll discuss specific informational authorized program analysis reports (APARs) issued by IBM that involve the Client Access family of products. Even if you are not interested in tracking APARs, I suggest you read through this material because several of the APARs I’ll discuss here indicate the directions IBM is taking with many significant products and features, such as Windows 2000, Virtual Private Networks (VPNs), and compatibility with third-party products.

For the Express client and Windows 95/NT client pages, IBM states that, if an APAR contains information that is pertinent to both clients, it will post that information on both pages. On the main Client Access Information APAR page, you will also see an additional link for AS/400 APARs (as400service.rochester.ibm.com/n_dir/nas4apar.nsf/nas4aparhome). This page contains the complete online set of APARs for each OS/400 release. These APARs are categorized in a variety of ways, including all APARs by component, Hiper APARs, APARs for each

When Express client reached GA on May 21st, IBM also released its store of final Express client APARs on the Web. At this time, these APARs are divided into the seven different sections including service packs, support statements, PC5250, Connectivity, SDK for ActiveX and OLE DB, Migration, and Host Servers. While I recommend checking out this page on a regular basis for specific answers to your Express client problems, the following APARs are more significant items involving your Express client installations. You may want to review them to assess their impact on your shop.

• “Windows Express V4R4M0 PTFs” (II11759)—Lists the current PTFs for Express client and the corresponding V4R4M0 PTFs that should be posted on your AS/400.

VPN connectivity is based on the Layer 2 Tunneling Protocol (L2TP) and that, since L2TP is not supported in Windows 9x or Windows NT 4.0, VPN support will not be available with Express client until Windows 2000 (which does support L2TP) is released.

• “Client Access Express with Firewalls and SOCKS Clients” (II11792)—Offers the results of IBM’s firewall testing with Express client including the IBM Firewall for AS/400 running on the Integrated NetFinity Server (INS, formerly known as the IPCS), IBM eNetwork firewall, Microsoft Proxy Server 2.0, and the Novell BorderManager Firewall (which IBM lists as an unsupported firewall).

• “CWBSY1008 Error Message After Migrating to Client Access Express” (II11841)—Offers the fix for this common problem. The problem will be fixed a future Express client service pack.

Since IBM has posted many Windows 95/NT client APARs on the Client Access site since 1996, I’m just going to focus on the significant APARs that were posted or updated during

April and May (as AS/400 Network Expert went to press). Please check this APAR page for other documents that may help your shop. The following are the most significant new Windows 95/NT client APARs:

• “Client Access and Microsoft Windows 2000” (II11853)—See the description of this APAR in the Express client section earlier in this article, but understand that IBM will not be supporting Client Access for Windows 95/NT running on the Windows 2000 product line.

• “Client Access Support for Multi-processor PCs and Multi-threading” (II11851)—Cross-posted on the Express client APAR page, this APAR states IBM’s position that it will not support multiple threads within a single application that uses the Client Access for Windows 95/NT APIs. IBM also states in this document that it will not support using the Windows 95/NT client on multiprocessor PCs. In contrast, IBM is currently testing multithreaded applications using Express client APIs and that multithreaded applications are being supported on multiprocessor PCs for Express client.

• “Microsoft Windows NT Server 4.0, Terminal Server Edition” (II11373)—See the description of this APAR in the Express client section earlier in this article.

• “Client Access and Windows 98” (II11274)—This APAR has information about running the Windows 95/NT client under Windows 98 and any known problems and fixes.

• “CA/400 Support for TCP/IP for Twinax” (II11022)—See this APAR for tips, techniques, restrictions, additional setup information, and other possible software and hardware to purchase if you want run TCP/IP over existing twinax cable.

• “Requirements for PC5250 Support of TCP/IP Enhancements” (II110918)—This APAR was released last year but updated to reflect OS/400 V4R4 information and other current information. It has everything you need to know to add PC5250 print emulation, named workstation ID support, and bypass sign-on support to your AS/400-and TCP/IP- connected desktops. This is an important APAR even if you’re not using Client Access because this document deals with adding this support to your AS/400 for any TCP/IP client that is starting a session.

• “LDAP Support for SSL in Client Access V3R2M0” (II11440)—This APAR has instructions for adding this support to the V3R2M0 client only. This APAR is not needed for Express client because this support is provided with the appropriate Client Encryption software.

APARs are an extremely good source of information for solving your Client Access and Express client problems and for determining what IBM is going to do with a new technology or technique (such as Windows 2000 or LDAP). I encourage you to check these packages often to find new relevant information to better manage your Client Access installations. 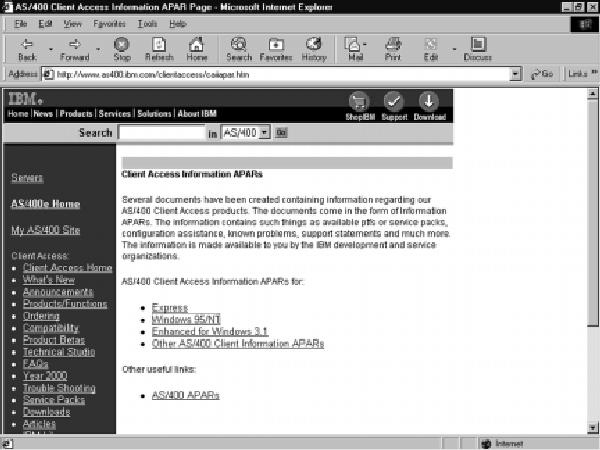