As in real life, you may not find what you seek in this virtual world, but you probably will emerge with a smile and desire to return.

The big news this week is that there's hope--hope that I may soon have a social life.

You see, I joined Second Life this week. The virtual world is one that I had read about in news magazines but had never considered actually spending any time exploring because, well, it sounded too kinky and weird--avatars forming attractions to each other and then consummating their need for intimacy? Get me out of here!

Well, supposedly that sort of thing does happen (though I haven't found it...yet), but a lot of other things are happening in Second Life too; a lot of business-related activity is beginning to develop. IBM is both using Second Life as well as helping to develop part of its infrastructure. It appears to be quite a technical challenge, and for anyone who wants to step through the technical looking glass, you can glean quite a bit of information just from visiting the site and learning what is going on behind the scenes that is creating this platform.

The reason I registered was to explore what IBM is calling a three-dimensional Virtual Green Data Center (VGDC). The virtual data center supposedly has been designed to give visitors a chance to learn how to manage and improve their data center energy efficiency--without leaving the office. According to the company, the data center is located on the IBM Virtual Business Center Island in Second Life.

Before describing my experience searching for this green data center, let me say that my first exposure to this brave new world began with a slight disappointment. I received a message after registering that said my system "does not meet Second Life's minimum system requirements." I scoffed at this because I had just upgraded my motherboard, processor, memory, etc. not more than a year ago with a snappy Intel dual-core processor and all the usual hardware. Come to find out, in order to move around Second Life with any kind of freedom (and isn't that what it's all about?), you've got to have something more along the lines of a gaming computer with access to a very fast Internet connection. I'm not sure what they mean by "fast" since most "high-speed" connections upload at around 700 kbps and download at around 3,000 kbps, which is what mine does. Regardless, I was moving pretty slowly through Second Life--before my system crashed, that is.

I did create an account and an identity, which is free. You give yourself new first and last names in Second Life, so suddenly I became, "MrChris Scribe." The last name was one I picked from a list, but I thought it appropriate to my occupation. My actual first name was already taken, so I just mashed together a common title, and voila.

I searched around first for the IBM Virtual Business Center Island and came across an add-on section of Second Life called the Grid, which is where all the business activity seems to be happening. Companies can build showrooms or meeting areas, give presentations, and show products. Needless to say, there is a developing ecosystem of technology developers who are there helping companies build their virtual presence online--and yes, one assumes they are getting paid. Real estate company Coldwell Banker apparently believes this is the new way to show property because it hired one of the development firms to create a virtual world for them online. It makes sense. Why waste valuable time and precious gas driving around looking at homes for sale when you can do it online from the comfort of your home office.

When I first entered the site, I did so in the regular area of Second Life, outside the Grid. I'm looking around at this colorful landscape with golf-course-like green terrain and marble-style terrazzos when right in front of me is this shapely babe in a bright purple low-cut blouse and tight pants. My first instinct was to cruise over there and give her a "Hi, I bet that fall from heaven must have hurt!" (which I would have had to type into the Local Chat window). But I couldn't steer my avatar, and MrChris first bumped into a marble column and then tripped over some stairs. Before I could get over to her, the object of interest rose up and flew away. Yes, you can fly in Second Life, and apparently it's no big deal.

But I came to my senses and realized I had work to do and thus teleported over to the Grid--a new feature--and did a lookup for IBM. Wow, those folks working on this have been busy. It's like watching the creation of a wasp nest. There's IBM China, IBM Italy, IBM Healthcare Island, several IBM Business Centers--about a dozen separate listings that correspond to plots of land in the Second Life Grid. That's another interesting feature of Second Life; you can buy and sell land. Who knows where it actually is, but it's for sale nevertheless. And you can buy it for, like, $5 a parcel. Even your kids can afford to buy property here. I found myself wanting to upgrade my free membership so I could buy a plot. Who knows why. It's just such a good deal, you have to have it.

Well, in all the IBM listings, I could find neither the IBM Virtual Business Center Island nor the Virtual Green Data Center. I'm sure they must be there somewhere because IBM was reported to have demonstrated the green data center at the Virtual Worlds Expo in Los Angeles this month. But I looked and looked, and then my system crashed again. I did, however, make it to the IBM Business Center Events marquee, where I joined the IBM Business Center Group. I know this because I received a message that said, "An object named Group inviter owned by IBM Business Center has given you a note card named 'joining the IBM Business Center Group.'" You can choose whether or not to accept the note card, which of course I did. Upon doing so, I received another message that said, "Congratulations! You've joined (or are about to join) a group of business and technical leaders interested in staying up to date on  virtual worlds and IBM innovation. We hope you enjoy your invitations to special members-only events, reminders of current events, and free stuff!  There's a new freebie each month. Touch the sign opposite this one to receive the new freebie."

I tried to get the free t-shirt, but my system crashed again, and I gave up--but not before I made a screen shot of yours truly standing in front of the IBM Business Center sign. (At the time, I noted there were 42,304 people logged onto Second Life--doing who knows what).

"Yo, everyone! Having a great time here in Second Life. Wish you were here!" 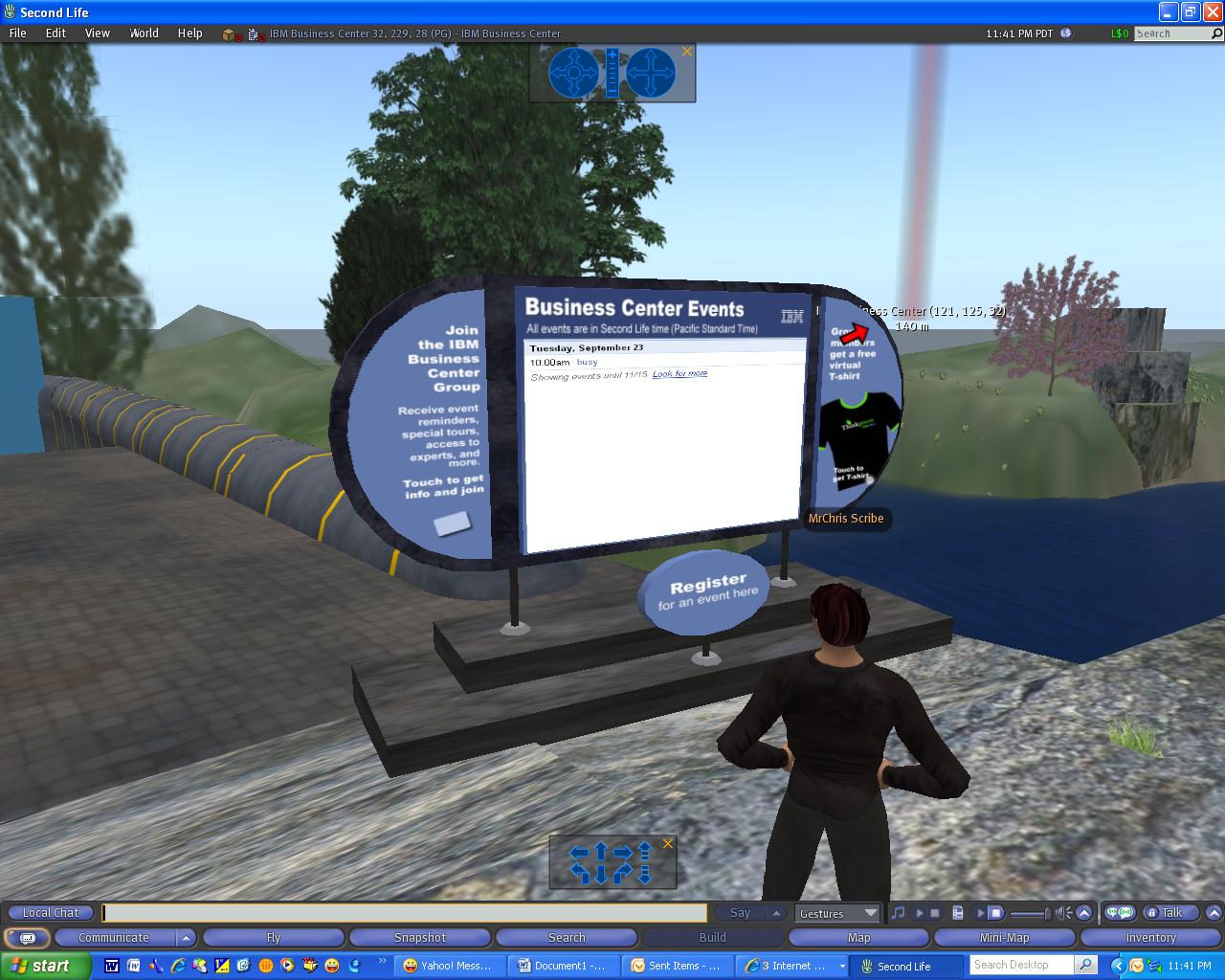 MrChris stands before the IBM Business Center Events marquee trying to figure out how to get a free T-shirt pictured at right. Residents online at that moment: 42,304.