You can compare this process to your office telephone system. Think of your AS/400’s IP address as the office phone number and the port number as the extension number to get to a specific office. When the client “calls” the AS/400, it asks for a specific extension. When that extension (or the server program) answers, meaningful communications begin. The process of communicating over a Socket begins when the client application requests a connection with the server port. The server daemon job is waiting, or “listening,” for this type of request and subsequently initiates the server job. At that point, the client application is able to communicate with the server job and send data back and forth. I will examine the function of each of the host servers.

There are nine host servers, each of which controls a certain task on the server side. Figure 1 shows the host server jobs and the functions that they control.

The file server, which is used in place of shared folder functionality, is used for accessing any of the file systems supported by the AS/400. These include the QfileSvr.400 file system, which provides access to the AS/400 Integrated File System (AS/400 IFS) on remote AS/400s. Also supported is the QNTC files system, which provides access to Microsoft Windows NT files on either an Integrated Netfinity Server for AS/400 (INS) or other NT network. There is also the QLANSrv file system supports OS/2. The QOpenSys file system, which is designed to be compatible with UNIX standards, is also supported. The QOPT file system allows access to CD-ROM drives and other optical media attached directly to the AS/400 and all the other common AS/400 IFS file systems you’ve become familiar with.

The print server allows for network printing through the AS/400 in the same way that virtual printing did under older versions of Client Access (or PC Support), only with greater print management functionality. Although virtual printing did allow printing of PC documents on AS/400 printers, it didn’t allow the user to control the AS400 printer queues the same way you would control a PC or network printer queue. The network print server function does. This means that AS/400 printers are more easily and invisibly integrated into the client workstation.

The data queue server allows PC client applications to have access to AS/400 data queues as well as provides portions of the OLE DB functionality.

The server mapper allows a client to find the port for a particular server job. The server daemon jobs handle the initial communication with the client and starting of the server job when a client request is issued. For example, when an application requires an ODBC connection to an AS/400 database file, the Client Access ODBC driver initiates the communication that is received by the Database Server daemon (QZDASRVSD). The Database Server daemon then submits the Database Server prestart job (QZDASOINIT), which actually returns the records to the Client Access ODBC driver. One instance of the QZDASOINIT prestart job will be started for each client requesting a connection. In this example, each Client Access ODBC connection will have an instance of QZDASOINIT.

These are the AS/400 host servers. Generally, you would control these servers via the Client Access Operations Navigator (OpsNav) GUI. What happens if you are not on a PC but you still need access to the host servers? If you don’t have a PC to run to, or if none of the PCs at your location have OpsNav on them, then you’ve got a problem. Or do you?

The green-screen interfaces to the host servers are the Start Host Server (STRHOSTSVR) and End Host Server (ENDHOSTSVR) commands. STRHOSTSVR accepts two parameters; SERVER, the server type (*CENTRAL, *DATABASE, *DTAQ, *FILE, *NETPRT, *RMTCMD, *SIGNON, *SRVMAP, or *ALL), and RQDPCL, the required protocol (*ANY, *TCP, or *IPX). The ENDHOSTSVR command only supports the server type (SERVER) parameter. While these two commands do allow you to start and stop any or all of the host servers, that’s pretty much all they do. And although you can view host server status information from OpsNav, there really hasn’t been a good green- screen option to do the same, until now.

The Work with Host Servers (WRKHOSTSVR) screen shown in Figure 2 (page 88) acts as a control panel for the host server jobs. Not only can you view the current status of all of the servers, but you can also start or stop them as well as work with the server daemon job from one screen. Remember that the server daemon job is the backbone of each of the host

servers. These jobs are responsible for the Socket communication and “listen” on the required port for connect requests from a client application. You can use WRKHOSTSVR to easily control your AS/400’s host servers from a green-screen.

The RPG IV program, WHSR1, shown in Figure 3 (page 89) along with display file WHSFM (available for download along with all the other code for this utility from the MC downloadable code Web page at www.midrangecomputing.com/mc) are the guts of the WRKHOSTSVR command. WHSR1 will check the status of each of the server daemon jobs, display this status, and allow the user to start and stop the servers or to work with the daemon job using the Work with Active Job (WRKACTJOB) command.

This program uses the CHKSVRPGM CL program (included with the downloadable code) to check the status of each server daemon job. This is done by doing an Allocate Object (ALCOBJ) command on the server daemon program for each server. If the program is running, it cannot be allocated, so the message CPF1002 is returned to the CL program, and the status is *ACTIVE. If the program is not running, the object is allocated and de-allocated immediately, and the status is *INACTIV.

The WHSR1 program can start and end a selected server by placing 1 (start) or 4 (end) in the option field next to the server name. Placing a 5 in the option field causes WRKACTJOB to be displayed for both the serve daemon jobs and the server jobs themselves for the selected host server. This means that you can view all of the jobs related to a specific host server on one screen without having to search through a subsystem. In the case of the database server, this allows you to view all instances of the QZDASOINIT prestart job and see who is currently doing remote data access. This can be a big help in resolving record-locking issues.

Being a Polite Host

Getting a handle on your host servers can be a big help in resolving issues with client-to- AS/400 applications, and using the WRKHOSTSVR command is a big step on the way to making sure that your AS/400 is a polite host.

Figure 1: This table shows all of the host servers and the functions they perform. 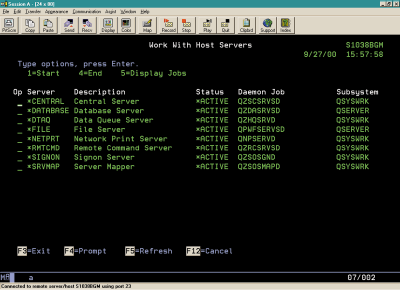 Figure 3: The RPG IV WHSR1 program gives you green-screen access to the AS/400 host servers.