As organizations expand and technology evolves, application integration becomes increasingly important. Component reuse and interoperability requirements have driven companies to move toward a Service-Oriented Architecture (SOA), where self-contained business logic can be exposed and shared efficiently across applications and platforms. At the heart of recent success in SOA designs are Web services, a technology that enables disjoint applications to communicate with each other in a platform- and language-independent manner.

Specifically, a Web service is a self-contained piece of software available via standard network protocols—such as HTTP(S), FTP, and SMTP—and exposed by a standardized interface, the Web Service Description Language (WSDL). The WSDL is a schema-defined XML document that includes all of the information an application requires to call, or consume, the Web service. Data is exchanged between the application and the Web service, using a standard XML messaging format called Simple Object Access Protocol (SOAP).

Web services, like all technology, are rapidly evolving. Implementations range from basic Remote Procedure Calls (RPCs) to loosely coupled, document-style messaging. The WSDL and SOAP specifications are expanding to include support for secure, reliable, transactional Web services. Enhancements in these areas are helping to make Web services the preferred solution for application integration throughout the industry.

To help describe the various components of Web services, organizations in the industry have defined a technology stack. An example stack that demonstrates the relationships between various Web services standards is depicted in Figure 1. 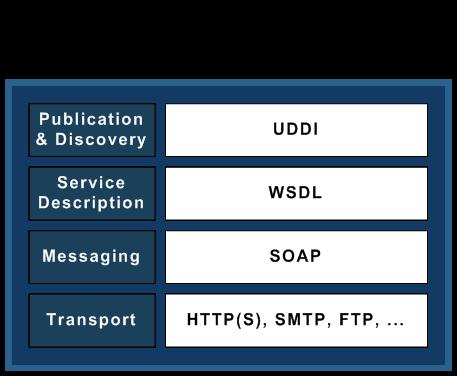 The Web services transport layer defines the communications protocol for exchanging data between Web services. As shown in Figure 1, it can use many different Internet transport protocols. Early adopters of SOAP 1.1, the initial Web service specifications controlled by the W3C (World Wide Web Consortium), assumed HTTP(S) for Web service transport. However, other protocols, such as SMTP, FTP, and IBM's MQSeries are increasingly being used and have been incorporated into the updated SOAP 1.2 specification.

The Web services messaging layer uses the XML-based SOAP, which is described by the W3C as "a simple and lightweight mechanism for exchanging structured and typed information between peers in a decentralized, distributed environment using XML."

A SOAP message (Figure 2) is an XML document consisting of three parts: the envelope describing the message, the header describing the data types and rules, and the body containing the actual message. The following code example shows a basic SOAP message requesting the temperature for a particular ZIP code:

The Web Service Description Language (WSDL) is a standardized XML document that describes everything that an application requires to consume a Web service. It includes information such as the operations available, their corresponding interface (input and output parameters), the messaging format, and the transport protocol. As with the SOAP message, the fact that WSDL is described in a standard XML format makes it machine-readable and platform-independent. An example of a simple WSDL document describing the temperature Web service is below:

Universal Description, Discovery, and Integration (UDDI) is an XML-based standard for publishing, finding, and describing Web services over the Internet. The UDDI specification can be used to create a registry of Web services, similar to registries that exist for telephone numbers.

Figure 3 describes the relationship between SOAP, WSDL, and UDDI. 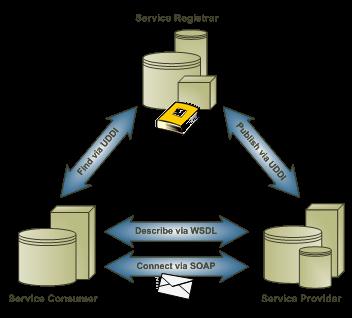 Figure 3: This diagram describes the relationships among SOAP, WSDL, and UDDI.

The WSDL specification allows for two distinct styles of messaging: document and RPC. With document-style messaging, the message details contained within the SOAP body element of the request and response are in the form of an XML document in a format agreed upon by the sender and receiver. In contrast, RPC-style messaging uses a specific XML representation of a procedure call to describe the message details.

The WSDL specification also allows for two methods of serializing the XML data contained within the SOAP body element: SOAP encoding and literal. Messages that use SOAP encoding serialize their data by conforming to the set of rules defined in the SOAP 1.1 specification, section 5. Literal messages are serialized according to an XML schema definition.

These two choices in Web service design—the messaging style and the method used to serialize the XML data—result in four basic styles of Web services available today. These are as shown in the table below.

Of the four styles listed, the two most commonly used are RPC/encoded and document/literal. Both styles are examined in the following sections.

RPC/encoded was one of the first Web service styles supported by early versions of SOAP engines. SOAP engines are used to generate implementations of the SOAP protocol, which can include the transport layer and the creation and consumption of the WSDL and the corresponding SOAP messages. RPC/encoded is the simplest of encoding styles because it enables SOAP engines to serialize and de-serialize data and automatically bind data to the remote object of an RPC. All that is left for the developer to do is map the input and output parameters of the Web service. An RPC/encoded sample of a WSDL and corresponding SOAP request are presented in Appendix A.

The following excerpt taken from the WSDL section in Appendix A highlights the reference to the section of the WSDL that indicates the messaging style (binding style).

The code below references the section of the WSDL that indicates the encoding style (use).

The major strength of the RPC/encoded style is its ease of use for both the service provider and the service consumer. The WSDL resembles an intuitive RPC-type interface. RPC/encoded SOAP messages include the operation name, allowing them to be dispatched accordingly, as shown in the add operation in the following example:

The document/literal style of Web services is becoming more commonly used. It overcomes the two major issues with RPC/encoded Web services: 1) Document/literal Web services conform to the WS-I guidelines for interoperability, and 2) There is loose coupling between the message body and the WSDL. Because the message body is a normal XML document defined by a schema and is independent of the WSDL, changes to message parameters do not require a change to the WSDL. In this case, the client would be required to modify only the XML messages to match the new schema and would not have to adjust the SOAP engine.

Appendix B contains an example of a WSDL for a document/literal Web service. Notice that the WSDL binding style indicates a document style of messaging and a literal encoding.

To overcome this limitation, many implementations are beginning to use the wrapped convention for document/literal-style messages. Wrapped document/literal messages are document/literal messages that follow two additional rules: 1) The body of the message contains only one element, and 2) That element has the same name as that of the operation being invoked. An example of this is presented in the code fragment below. The complete SOAP message is listed in Appendix B.


The body of this SOAP request now contains one element, appropriately named after the "add" operation, which wraps the message parameters (person and phone). This allows SOAP engines to determine the invoked operation from the SOAP document and dispatch the message accordingly.

Which One to Use?

The Evolution of Web Services

Web services are quickly becoming the method of choice for many organizations looking for interoperable application integration. And while the basic specifications have been mostly effective in this area, companies and individuals are looking to expand on them to allow for features such as increased security, reliable messaging, and support for transactions. As a result, organizations such as Microsoft and IBM have collaborated to create a set of specifications to meet these demands. These include specifications for security, transactions, and reliable messaging, which are discussed in more detail below. 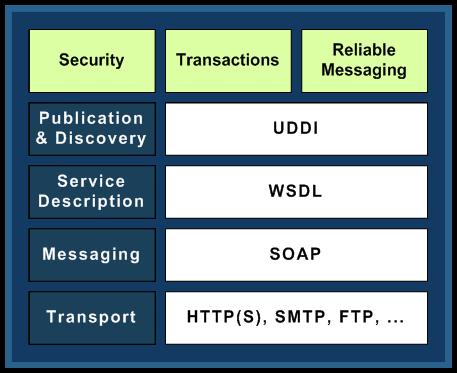 Sometimes, however, additional security is required at the application level. For example, it may be required that all or part of the SOAP message be encrypted to ensure that only the intended party is able to decrypt and view the contents. WS-Security enables this type of security. The specification utilizes existing security protocols such as Kerberos and X509 and defines how they are to be used in an interoperable manner.

Another security specification, WS-Trust, enables Web services to establish trusted relationships between applications. For example, an organization using Web services with WS-Trust is able to use a security token to validate the sender of a particular SOAP message.

The additional security specifications, including WS-Security and WS-Trust, can work in addition to transport-level security to help companies achieve the level of security that they require.

Transactions
Some business functions are difficult to implement because they require coordination between related business processes. For example, imagine a financial institution that provides a service allowing individuals to transfer money from one account to another. Such a service is actually made up of a number of smaller services, including services to check the source account balance, debit the source account, and credit the target account. These services need to be carried out within a transaction, i.e., they must be coordinated and performed in a particular sequence. A credit should not be applied to the target account before the balance of the source account is verified. These types of transactional business services would be difficult to implement using the basic specifications for Web services.

However, recent specifications are providing Web services with these transactional capabilities. WS-Coordination, for example, facilitates coordination between related services. It defines additional elements to be included within related SOAP messages and defines a coordinator service, which acts to coordinate and sequence the related operations. WS-AtomicTransaction and WS-BusinessActivity build on the WS-Coordination specification, adding support for atomic, all-or-nothing business transactions, with error and exception-handling capabilities.

Reliable Messaging
The inherently unreliable nature of application communication over the Internet forces companies to build reliable messaging techniques into their distributed applications. Until recently, organizations using Web services have had to employ techniques outside of the base Web services specifications to ensure that messages are exchanged reliably. These techniques are employed at the application level and require some negotiation on standards between business partners.

The WS-ReliableMessaging specification allows companies to enable reliable messaging from within the Web services stack, once again allowing applications to focus back on the business logic. The specification defines a protocol that ensures that messages are delivered in the correct order without duplication.

With Web Services, SOA Is Evolving

Organizations are evolving toward a Service-Oriented Architecture, enabling services to be shared across applications, networks, and platforms. Web services have helped to achieve this difficult task, employing XML standards that allow data exchange and application integration in a platform-independent manner. Wrapped document/literal-style messaging is providing for increased flexibility and interoperable Web services, where entire XML documents are exchanged containing the request and return parameters. In addition, emerging standards for security, transactions, and reliable messaging are enabling organizations to rely on Web services to help with creating state-of-the-art distributed, multi-platform applications, while allowing their focus to shift back to what they know best: their business.

Rahim Lalani is a senior professional services consultant at LANSA, a leading provider of application development and integration software. He has worked with numerous clients to design and implement enterprise-scale applications, taking advantage of the latest technologies for application integration. You may contact Rahim at This email address is being protected from spambots. You need JavaScript enabled to view it..