Not long ago, high-speed data lines were cost prohibitive, and as a result, their use was limited to large businesses. Today, it's a different world. The onslaught of broadband technologies like cable modems and DSL have made high-speed data lines commonplace and have driven down the cost of just about every other type of high-speed data connection. Now, most businesses, even small businesses, have high-speed Internet connectivity. And while these connections, along with the use of virtual private network (VPN) technology, allow these businesses to use the Internet as their own private WAN, most businesses use this technology only for transmitting computer data.

Well, get ready to take another look at how you can use your high-speed data lines. Technologies like Voice over IP (VOIP) and video conferencing have evolved into stand-alone "appliances" that can run over your LAN/WAN. In this article, I'll explain what's involved with both of these technologies and discuss how easily you can achieve decent cost savings.

"Voice over IP": This phrase may conjure up visions of sitting in front of your computer talking into a microphone. But VOIP has come to mean a whole lot more. You can easily integrate your existing PBX phone system with your LAN/WAN or VPN using stand-alone VOIP gateway options or hardware routers with support for VOIP. This allows you to eliminate long-distance telephone charges between remote offices and your corporate office.

The concept is pretty simple. By adding VOIP gateways at each location and interfacing them to the PBX systems at each location, you'll be able call anyone at any remote office by simply dialing an access code to get to their PBX; then, you simply dial the person's extension in the same way you would if you were making a toll call. The big difference is that there are no long-distance charges. You can even fax through VOIP.

The diagram in Figure 1 gives you a graphical representation of the VOIP concept. 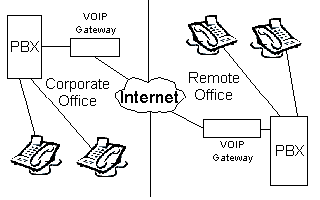 Figure 1: With VOIP, you can route voice calls over the Internet.

The example in Figure 1 assumes that you are interfacing the VOIP gateways via the Internet using a stand-alone VOIP gateway. Currently, quite a few vendors offer stand-alone VOIP gateway solutions (Avaya, Cisco, Mediatrix, Multi-Tech, Siemens). Some of these vendors offer units that allows for maximum PBX compatibility by allowing the user to select the type of interface used on each of the gateway's ports. In addition, the major router vendors like Cisco offer VOIP options for their routers.

The table in Figure 2 shows a few of the types of interfaces supported by VOIP gateways.

Figure 2: These are the interfaces from your PBX to a VOIP gateway.

For maximum compatibility, choose a solution that supports the maximum number of interfaces. Most VOIP systems support at least FXO protocols. Devices that support FXO should be compatible with the analog phone port off of most PBX systems.

Another important feature to look for is H.323 compliance. H.323 adds the ability to interface software and hardware that conforms to the Internet standard for conferencing applications. This means that you can use PC applications like Microsoft NetMeeting to place calls to extensions on your PBX, and users at remote sites can connect to your VOIP gateway to call an extension on your office PBX over a 56K Internet connection. Even though a standard telephone call uses 64Kbps, compression codecs allow these calls to be compressed to 5 to 10 Kbps.

Figure 3: This list shows some of the speech codecs used by VOIP systems.

You can see that, without a codec that offers some level of compression, a voice call would take a significant amount of bandwidth.

Using the G.729 A codec, a voice call can be compressed to 8Kbps without significant loss in sound quality. One of the key problems when adding VOIP to an existing data network is that voice calls and data transmissions will compete for bandwidth. To avoid loss of voice quality or dropped calls, you will need to implement some level of quality of service (QoS) on your network routers. Within a router, this allows you to define a priority for applications running over your LAN/WAN. The primary method used for accomplishing this task for VOIP purposes is differentiated service, or diffserv. Diffserv allows you to prioritize an IP application based on the IP Type of Service (TOS) field. Imagine that you are on an important business call with a remote location and suddenly the call starts to break up like a bad cell phone conversation...all because someone at one end started to download the latest Client Access Express service pack. QoS ensures that the voice call takes priority over the service pack download. Again, with a relatively small hardware investment and a little time to configure the devices, you can easily eliminate long-distance charges between your office and remote locations.

As with the advent of VOIP, this change allows you to eliminate the per-minute line cost associated with an ISDN connection. The cost involved with a modern video conferencing system really depends on what level of video conferencing equipment you require. If price is a primary consideration, you can simply purchase a low-end Web cam and use Microsoft NetMeeting as your conferencing application. This type of solution is by far the most price-conscious. It can be purchased for under $100 since NetMeeting is included free with Windows. From a performance standpoint, however, the video quality will only be as good as your camera hardware. On the up side, NetMeeting gives you other conferencing functions, such as application sharing and white boarding.

For a little bit more money, you can purchase a camera specifically built for video conferencing that offers better video quality and includes its own conferencing application. An example of this type of equipment would be Polycom's ViaVideo system. This hardware/software combination also has built-in echo-canceling functionality to prevent the echo effect caused by hearing your own voice coming through on the remote end of your video conference. This solution costs around $500, and, like the first option, is best suited to personal or small meeting room use.

For larger meeting rooms, you'll probably want to select a full-blown stand-alone video conferencing system. This type of device incorporates a high-quality video camera with a video conferencing application and offers the best overall quality. The two major vendors in this field are Polycom and Sony. These systems can be connected using either an IP Ethernet network or ISDN lines. The video cameras incorporated into this type of system can be repositioned manually using remote control or automatically using voice and/or color tracking. In a large conference room full of people, this functionality enables the camera to automatically focus on the current speaker and adjust when a new person speaks. This functionality uses some "intelligence" to prevent from bouncing back and forth between speakers and instead zooms out to place both speakers in the view of the camera. A stand-alone video conferencing machine can be purchased for as little as $3,000.

As with VOIP, purchasing a device that conforms to the existing standards is important. All of the options mentioned here support H.323 standards and, in fact, can be used in conjunction with one another. Figure 4 shows what a simple video conferencing network might look like. 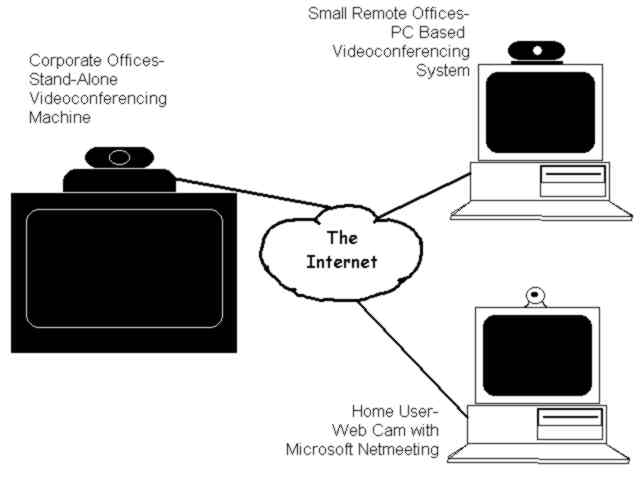 Again, you can see that standards-based systems give you maximum flexibility. Small, remote sites comprised of a handful of employees might choose one of the two more cost-efficient options. Larger corporate installations would probably select a stand-alone video conferencing machine. Home users might have a Web cam and NetMeeting. Since all of these include H.323 compatibility, you can place calls between any and all of these devices. Since the VOIP systems I mentioned earlier are also H.323 compliant, you can also call anyone on your PBX from your video conferencing system for a "voice only" conference. As with VOIP, QoS can be a serious consideration when using a video conferencing system over a busy network. When using this type of system over the Internet, there can be serious implications on the video conference quality when Web traffic is heavy. An average video conference uses anywhere from 128Kpbs to 768Kpbs. Although you can perform a video conference using less than 128Kbps connection, the overall quality will be sub par.

For a more in-depth discussion of video conferencing solutions, see "Video Conferencing: The Time Has Come."

One of the best reasons to consider installing VOIP or video conferencing equipment is the cost savings. Let's take a look at the ROI possibility for both.

An average cost for a four-port VOIP gateway is around $1,800. This device would allow four concurrent calls between locations. Assuming that you don't need to add any bandwidth capability to your existing network, the total cost for two locations would be $3,600. Divide this number by the average monthly cost of toll calls between the two locations to determine how many months it would take for your VOIP equipment to pay for itself. For example, if your corporate office averages $300 in long-distance calls to a remote office, and the remote office averages $60 in calls to corporate (for a total of $360 per month), you would pay for the VOIP equipment in approximately 10 months. It's easy to see that you can achieve a relatively quick ROI by installing a VOIP solution.

Video conferencing is another story. It's not as easy to calculate the ROI here. One way to look at this is to base this calculation on the cost of an average business trip to the remote office. And this doesn't even take into consideration the out-of-office time saved.

I hope that this article has helped you re-think how you use your network bandwidth. Adding applications like VOIP and video conferencing not only extends the usefulness of your network, but can also reap significant cost savings. You'll be giving some extremely useful tools to your users at the same time.

Mike Faust is the MIS Manager for The Lehigh Group in Macungie, PA. Check out Mike's book from MC Press titled The iSeries & AS/400 Programmer's Guide to Cool Things. You can reach Mike at This email address is being protected from spambots. You need JavaScript enabled to view it..