Print
IT Infrastructure - Other

iSeries Navigator provides iSeries users with a broad suite of functions. In V5R2, iSeries Navigator includes a new feature that automatically restarts your failed monitors. In this article, I'll explain how the new monitor restart feature works and what it means to your management environment. I'll start with a brief scenario to give an idea of what monitor restart does.

You are using system monitors to notify you of peak CPU usage times so that you can adjust your workloads and optimize your computing resource. Your system monitor is configured to notify you and take some actions when usage thresholds are met.. The problem is that every night your iSeries systems get backed up and then restarted, but your CPU utilization monitor is not reactivated. This creates a monitoring gap from 1:00 a.m. to 8:30 a.m., when you arrive at work and restart your monitors. Your systems consist of one V5R2 iSeries, one V5R1 iSeries, and two V4R5 iSeries. You are interested in monitoring all three systems.

In this scenario, you're utilizing automatically started monitors to assure that no CPU utilization thresholds are missed so that proper notification and actions are taken even though you are not around to restart your monitor.

The monitor restart feature of V5R2 is intended to keep iSeries Navigator monitors running--or at least attempting to run in spite of iSeries restarts, system outages, LAN outages, and other assorted headaches that occasionally plague system administrators. The cool news for this feature is that although it is implemented on V5R2, it effectively restarts monitors managed by V5R2 on endpoint systems for any past release. No PTFs are necessary to make it work. Now, that's playing nice!

In simple terms, the "Automatically restart failed monitors" feature does exactly that; it keeps your iSeries Navigator monitors running or attempting to run in spite of various forms of interruptions. You have a backup plan that puts your iSeries in restricted mode? When the iSeries comes out of restricted state and Management Central servers start up, the monitors that were running when the system went to restricted state will start up again without your intervention. You have a few endpoints with monitors running to them and you suffer a LAN outage? When the LAN becomes active again, those endpoints will reconnect, and the monitors will go merrily on their way.

To set your monitors to be restarted automatically, select Properties from the Management
Central context menu, as shown in Figure 1. Notice that what you're setting is a global property that is associated with your central system, so your settings will affect all the monitors managed by that central system. Select the Connections tab to reach the configurable properties of monitor restart. Checking the box for "Automatically restart monitors on failed systems" enables monitor restart. Once you've done that, you must stop and restart the Management Central servers for monitor restart to take effect. To start or stop those servers, in iSeries Navigator, go to Connection -> Network -> Servers -> TCP/IP Servers. Then, select Management Central, then Stop, then Start. 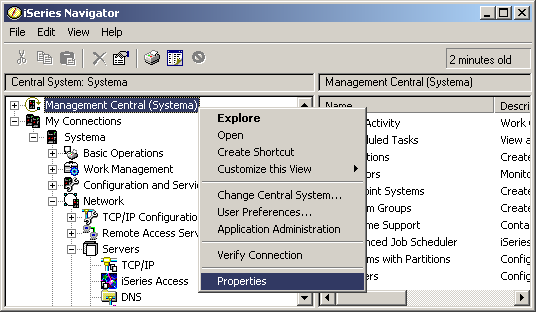 Figure 1: From the Management Central context menu you can set your monitors to be restarted automatically. (Click images to enlarge.)

The Connection tab includes fields for "How long to attempt restart" and "How often to attempt restart." The default property for monitor restart is to attempt to restart every five minutes for 180 minutes. You can change those retry attempt cycles to whatever intervals you desire. In both fields, the possible intervals are limited by the interface to a maximum value of 9,999 minutes and a minimum value of one minute. The interface also requires that the value for "How often to attempt restart " cannot be greater than the value for "How long to attempt restart."
Monitors are candidates for restart if they are running. Running monitors are those with an overall status of Starting, Started, Started on x of y, Triggered, or Failed on x of y. Monitors that have an overall status of Failed or Stopped do not qualify.

Restart of the V5R2 Central System

Restart of the Endpoint System

In the second restart behavior, an endpoint has gone down or offline (for whatever reason--maybe as the result of a LAN malfunction or the endpoint getting restarted). When the V5R2 central system loses contact with that endpoint, the restart feature kicks in. Every five minutes (or whatever value you've chosen), the monitor that is managed by the central system will try to reconnect with the endpoint it has lost contact with. It will continue these restart (connect) attempts for however long you've specified.

OK, now that you know the basics, I'll discuss some of the side effects of automatically restarting failed monitors. Earlier, I mentioned starting a "running" monitor. A running monitor refers to the overall status of a monitor--that is, the status that you see in the details panel of iSeries Navigator (on the right side). In the session pictured in Figure 2, notice that one monitor has a status of Failed, another has a status of Failed on 1 of 3 systems, and another has a triggered status. The running monitors here are the triggered monitor and the monitor that shows Failed on 1 of 3 systems. If this central system is stopped and then restarted, those two monitors will restart. The idea here is to only start monitors that are running when the central system ends. If you right-click on "Monitor that restarts" (highlighted in the figure), the detailed status will tell you something about why the monitor is not started on the other two systems. The information in those detailed status reports is not considered when automatically restarting monitors.

Figure 2: iSeries Navigator will reveal which monitors have restarted and explain why the others haven't.

Any V5R2 iSeries--or even multiple V5R2 iSeries--can be designated as a central system. The choice of central system is merely a statement of which iSeries you have chosen to create and manage an iSeries Navigator monitor or task. When utilizing the automatic monitor restart feature, keep in mind that you must turn it off when you no longer need it. Properly managing this feature will help prevent unwanted restarts of monitors you no longer intend to use. This may not seem like a big deal, but some monitors, based upon the number of metrics and collection interval, can consume CPU or even disk space. You probably do not want them automatically restarting when you are not aware of it. You turn monitor restart off the same way you turned it on, through the iSeries Navigator interface. Simply uncheck "Automatically restart monitors on failed systems." Remember, you will need to restart the Management Central servers on that iSeries for the change to take effect.

There is a behavior of restart worth mentioning at this point. Restart is intended to act only on monitors that are running or were known to be running when an interruption like those described occurred. Therefore, if the overall state of a monitor is Failed on 1 of 2 for example, that monitor is running. Restart will take effect for the configured amount of time on the single endpoint that is failed. On the other hand, if the monitor has an overall status of Failed, this monitor is not running and restart will have no effect on it. This behavior allows failed monitors to exist on the central system and not be restarted. Unfortunately, there are conditions under which you may want a failed monitor to restart. As an example, suppose you have a central system where all your monitors are created, managed, and viewed through iSeries Navigator. You have an endpoint system--for example, an HTTP server--where there is a job whose log you are monitoring. The monitor for the endpoint is created on and managed from a separate central system. If you experience a LAN outage between the central system and the endpoint or you restart the servers on the endpoint, the status of the HTTP monitor will go to an overall status of Failed. Notice that a running status like Failed on 1 of 2 will occur if this monitor is assigned to multiple endpoints. Since this monitor is assigned to a single endpoint that does not reside on the central server, the overall Failed status prevents automatic restart for that monitor. Alternatively, if the endpoint system is at V5R2, you can manage that monitor directly on the endpoint system that runs the job you are monitoring. With the monitor created and managed on that endpoint system, restart will take the central system behavior and not be affected by the single endpoint system failure. This may be an inconvenience to the system administrator who wants to manage all his endpoints from a single central system, but it does allow exploiting monitor restart.

Tom Brekke is staff software engineer at IBM Rochester working on iSeries Navigator and related projects. He can be reached by email at This email address is being protected from spambots. You need JavaScript enabled to view it..