Don't let operators or users waste valuable time and system resources by running reports and other processes with incorrect parameters or at the wrong time.

Do you still have people running reports repetitively at a certain time of day, week, or month? Maybe your ERP system has a series of demand reports, supplier order reports, or inventory reports that must be run, and you have an operator or clerk running those reports manually from a green-screen? Have these reports ever run with incorrect selection criteria? Maybe someone input an incorrect product line or date range? Or maybe someone took a vacation day and the reports didn't run at all?

Applications with green-screen, 5250-based, terminal type interfaces are still very prevalent in our market. Core applications for banking, transportation, manufacturing, distribution, and others still have green-screen interfaces available even if they've got a GUI front-end. This gives you the opportunity to automate and integrate these processes into your batch job stream. How? By using Robot/REPLAY, the interactive automation tool from Help/Systems. Robot/REPLAY is a plug-in tool for users of Robot/SCHEDULE.

Robot/REPLAY works by capturing the 5250 data stream while you run your interactive application and saves the data as a "Replay object." Once the Replay object has been created, it can be scheduled into a batch Robot/SCHEDULE job. Field-level input parameters can be automated with Robot's powerful Reserved Command Variable feature, replacing the manual input normally required to run the report or update process.

After the Replay object is created, you will have a list of interactive panels (Figure 2) where you can automate any operator input, such as a date range, using a Reserved Command Variable.

Simply select the panel to edit, put your cursor on the field, and press F4 to prompt (Figure 3). Select the appropriate variable, and the field will be populated with a value calculated at the time the Replay object runs. 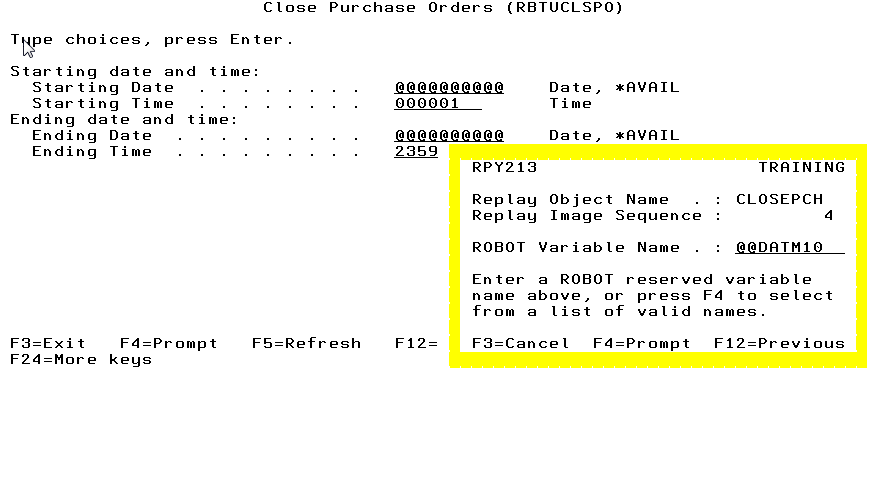 You will then schedule the Replay object to run as part of a Robot/SCHEDULE job stream or as an independent process. When the job runs, it will submit one batch job to run the process, which will, in turn, initiate a virtual terminal session. The batch job then "feeds" the interactive screens to the virtual terminal. If one of the interactive panels submits one or multiple batch jobs, as in Figure 3, you can choose whether the whole process can wait for those "child" jobs.

Don't worry about operators or users wasting valuable time and system resources by running reports and other processes with incorrect parameters or at the wrong time. Give the responsibility to Robot and they'll be run properly — at the right time, every time.

Chuck Losinski is Director of Automation Technology for the Robot product line. He has more than 25 years of experience with IBM i systems. Chuck¹s background includes system implementation, programming, operations, and support. He is certified as an IBM System Administrator and has helped customers automate business applications from InFor, JDE Enterprise One, HBOC, RxClaim, Infinium, Jack Henry, and more.