If you're not monitoring your storage with at least one of them, that overloaded hard drive could jump up and bite you.

I noticed my desktop PC slowing down last week, and I couldn't think why Betsy (I call her Betsy because she's like a good ol' gal) was beginning to balk under my gentle abuse. I began to peek around under her hoop skirt and realized that of 153 GB of usable disk space, her hard drive had only 844 MB left! I was shocked, I tell you—shocked!

The lack of gratitude I was feeling after having gone through and laboriously uninstalled dozens of my favorite applications just to give her more room less than a year ago was enough to make a grown man cry. How can something like this happen?

I told a friend of mine, and he said, "Chris, this happens all the time if you don't have storage-monitoring software to keep you apprised of how fast you're consuming disk." Well, I didn't have any such monitoring software and things got a little out of control, OK? 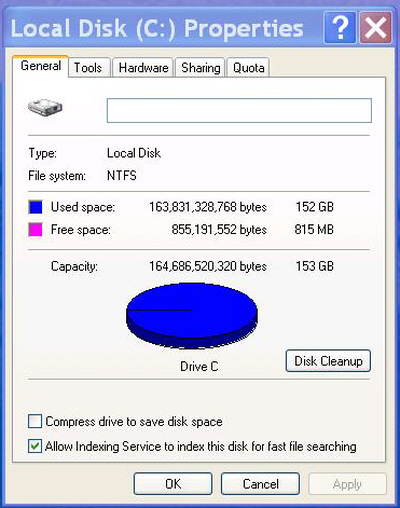 Figure 1: This chart showing available space on Chris' hard drive reveals that it is, for all intents and purposes, full.

You can spend a tidy sum on monitoring software to keep on top of your storage area network (SAN). An alternative might be to download a tool from SolarWinds that will monitor up to 25 logical units (LUNs) for free. You will need a valid IP address for the storage area network array you wish to monitor, but SolarWinds' SAN Monitor will poll the disks every hour—or as often as once a minute—while giving you the chance to pre-set performance thresholds. It will tell you in a dashboard what your array performance is in total input/output operations per second, measure your LUN I/O times, and alert you in yellow to unfavorable statistics showing risk and in red for error conditions. You can organize LUNs by size, the busiest ones versus those that are under-utilized. Drill down into LUN size, physical disk, RAID type, etc. SolarWinds' SAN Monitor supports IBM, Dell, Sun, and EMC (CLARiiON) SAN systems, including the popular IBM DS3000, DS4000, and DS5000 storage systems. You can install and configure SAN Monitor in less than five minutes.

You may find that you have far more than 25 logical units since an array can generally be divided up into as many as 256 logical drives. In that case, SolarWinds would love to introduce you to its enterprise multi-vendor storage monitoring and reporting solution, Storage Manager 5.2, which you can also download and try free for 30 days. In fact, one download option from the company's Web site bundles both SAN Monitor and Storage Manager 5.2 into a single zip package.

SolarWinds, by the way, is an interesting company. Started in 1999 by a group of network and system engineers, it now trades publicly on the New York Stock Exchange (NYSE: SWI) and claims more than 90,000 customers around the world. According to the company, 425 of the firms on the Fortune 500 list are using one or more of its products. SolarWinds is a company that appears to truly understand and take good care of its customers. All of its paid software is available for download as a free trial.

In addition, it offers more than 25 very useful utilities absolutely free, no questions asked. Well, it does ask one question—who are you? Within 10 minutes of downloading one of the free titles, you will get a call. The salesman won't sound as if he is trying to sell you something, however. He merely wants to know if you need help configuring your new software! Talk about a smooth approach to establishing a lasting relationship; this is a model every IT vendor should emulate.

Many of the company's software titles support Microsoft technology, but certainly not all. Storage Manager 5.2, for instance, now supports a number of IBM storage products, including the IBM SAN Volume Controller, as well as the IBM DS6000 and large DS8000 storage systems, and even the state-of-the art IBM XIV systems.

So go ahead and reward yourself with a few freebies. You deserve it.