CCSID (pronounced see-sid) is not just another acronym that you pronounce; it is a very important feature of the AS/400 and the iSeries 400. Yet, as something so important, very few of us programmers fully understand it. This article takes a look at what coded character set IDs are and how they are used. It is intended for anyone looking for a basic under- standing of CCSIDs, but this article is also targeted at software developers. It does not fully explain national language support; IBM provides some really great manuals for that. (See the Reference and Related Materials list at the end of this article.)

All Developers Need CCSIDs
There are many reasons why software developers need to understand CCSIDs, even if they are not developing international software. CCSIDs require consideration when software is being developed under any of the following conditions (this list is not all-inclusive):

All of the above conditions may require some form of data conversion. In some cases, data conversion is performed implicitly by OS/400; in other cases, the software has to perform an explicit conversion of the data. For example, software that communicates with another system may need to convert data that it sends from EBCDIC to ASCII, and vice versa for data that it receives. Data conversion is performed using CCSIDs, even when converting from EBCDIC to ASCII. This is evident by examining the CCSID attribute of the TCP/IP servers (such as FTP and SMTP). These servers have a CCSID attribute with a default value of 00819, which represents the most common version of ASCII. The point here is that all developers need to understand how CCSIDs work—their use is not exclusive to international software authors. Now, take a look at the specifics of why you need to understand this stuff.

As with any technical subject matter, national language support has its own terminology. At the basic level, there are character sets, code pages, and code points.

To a computer, all data is just a series of bits. These bits represent binary values. As it is difficult to read binary data, a graphical representation is needed. This is where encoding schemes come into play. An encoding scheme cross-references binary data with character sets. This allows the computer to display its data as graphical characters, a form pleasant to the human eye. 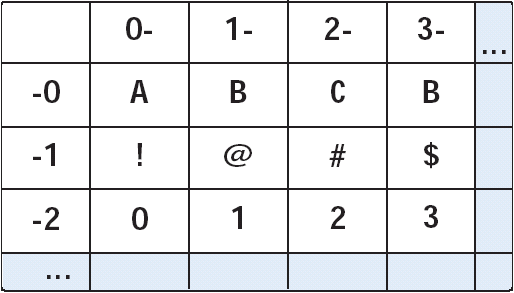 Figure 1: In this excerpt from a hypothetical code page, each cell is a code point.

A code page is displayed as a matrix and usually indicates the hexadecimal value of a code point rather than the binary value, simply because it is easier for developers to work with hexadecimal numbers than binary ones. Code pages exist for many different countries and languages, each one being assigned a unique numeric value. To clarify this, I'll use an analogy: If each character set is assigned a page, and those pages are put into a book, that book would be called EBCDIC. Each page in that book would be a code page. Each code page would be referenced by its page number. There would also be a similar book for the ASCII encoding scheme (American Standard Code for Information Interchange). The iSeries reads both the EBCDIC and the ASCII books, with the former being read more often.

Different code pages represent different character sets. The code points for a given character may vary between code pages. For example, in code page 819, code point X'42' is an uppercase B. In code page 37, an uppercase B is at code point X'C2', and X'42' is the character ‚. Therefore, to preserve the integrity of the data when moving between a system that uses code page 37 and one that uses 819, a conversion must take place to convert X'C2' to X'42'. The conversion will preserve the B so that the user on the 819 system sees the same character as the user on the 37 system. See Appendix F of IBM's International Application Development manual for the actual IBM code pages. (Both 37 and 819 are listed.)

The iSeries supports many languages, character sets, and code pages. In fact, the iSeries even allows different users running on the same system to use different languages. Having this integration of code pages presents a data integrity problem. Figure 2 illustrates this problem.

Figure 2: Here is an example of a data integrity problem resulting from integrating code pages.

Figure 3: CCSIDs solve the data integrity problem by allowing data to be converted.

As shown in Figure 2, the U.S. user writes a record to the database containing the pound sign (#) character. The U.S. code page 37 assigns code point X'7B' to the # character, so a X'7B' is stored in the database. The Danish user then reads the same record from the file, but code point X'7B' on the Danish code page 277 is the [.Delta] character, which is what the Danish user sees. These results are not acceptable.

To address the issue of data conversion between code pages, the coded character set identifier (CCSID) was created. A CCSID is an attribute (or field) of an object that identifies how data inside the object is encoded, indicating the code page and character set of the data. In most cases, the CCSID is actually the same value as the code page. (U.S. CCSID is 37, and the associated code page is also 37). Having data tagged with CCSIDs allows the system to automatically convert between code pages when necessary. This data conversion is generally referred to as CCSID conversion; however, the end result is really a conversion from one code page to another, so it can be thought of as code page conversion.

Figure 3 revisits the example in Figure 2, only this time using CCSIDs to allow for the data to be converted. As in the first example, the U.S. user writes a record to the database containing the #, and a value of X'7B' gets stored. Now, when the Danish user reads the record, the system realizes that the job's CCSID is 277 and the CCSID of the data is 37. So, the system performs an implicit conversion of the data from CCSID 37 to 277. The X'7B' gets converted to X'4A', the code point for the # on the 277 code page. The Danish user sees the # character as he is supposed to. This also works conversely; if the Danish user writes a # character to the database, it gets converted to X'7B' before it is actually stored.

One final thing to note is that a given character may appear in one code page but not another. The system has different ways in which it handles this condition when it occurs. For an explanation of how this is handled, see IBM's International Application Development manual.

Now that you have an understanding of what CCSIDs are, take a look at where they are used. CCSID attributes appear in a lot of places. I will focus on the most relevant ones: jobs, user profiles, the QCCSID system value, and objects containing data.

Many objects also have CCSID attributes. The objects to be most concerned with are ones that contain data, such as database files, message files, and message queues. An object's CCSID attribute identifies how the data inside the object is stored. It is then used by the system to determine if conversion is needed when the object is accessed.

Jobs have another CCSID attribute called the default CCSID. To understand the default CCSID, you first need to look at the special CCSID value 65535. When a CCSID attribute has the value 65535, the system does not perform conversions on that data. This special value is also called *HEX, as it is intended to indicate hexadecimal data (although I prefer to call it binary data, but there is no *BIN). True binary data is not represented by characters, so therefore, no CCSID is necessary. Binary data should not be converted, as a conversion will destroy the data, so it should be tagged with CCSID 65535. I should note that numeric fields are automatically treated as *HEX.

The iSeries ships with the QCCSID system value set to 65535, and many systems actually run this way. This works okay, but it does present a couple of problems. If a job is running with a CCSID of 65535 and it creates an object containing data, what CCSID should that object be assigned? Using 65535 defeats the purpose of even having the CCSID in the first place (refer to Figure 2). What about the case when a CCSID conversion is absolutely required? If a job is talking to an ASCII-based system, a conversion to ASCII is required. However, if the job is running with 65535, you do not know what CCSID to use as the From CCSID on your conversion to ASCII. To solve these problems, the job default CCSID attribute was introduced. This attribute is only used when the job CCSID is 65535. If the job CCSID is 65535, the system determines the default CCSID by looking at the language ID of the job; language IDs have corresponding CCSIDs and are also an attribute of a job.

Hopefully, this article was enough to get you up and running with CCSIDs. Now that you have a basic understanding of how they work, making sense of the manuals should be a little easier. The Native Language System is a complex topic. For a more complete explanation of the iSeries' national language support, see the References and Related Materials list at the end of this article. Also, look for the second part of this article, which will cover using CCSID conversion APIs, among other things, in the August issue of Midrange Computing .

Matt Bresnan is a software engineer and project lead for Help/Systems, Inc. He lives in Chaska, Minnesota, where the winters are cold but the iSeries is hot! He can be reached by email at This email address is being protected from spambots. You need JavaScript enabled to view it..