Virtualization and Internet Protocol version 6 (IPv6) are both hot topics, and not only for IBM; it seems that everyone is trying to understand how to leverage these technologies. Here is a real-world example of how you can use them together to provide value for your business.

Virtualization by definition means to logically separate from the physical, and in computing terms this generally is done to simplify technology to make it more versatile. The two virtualization technologies I will be describing are virtual SCSI (vSCSI), which allows us to share storage between logical partitions, and virtual Ethernet, which allows TCP/IP communication between logical partitions. The IBM POWER Hypervisor is the underlying technology that makes this virtualization possible.

The goal is to use vSCSI to mirror storage across logical partitions to create a highly available IPv6 router.

This means that you will have a logical partition that will run on virtualized DASD and will not be dependent on any single logical partition. In fact, if mirroring is configured with hot spares, you could lose your primary, secondary, or tertiary vSCSI host without causing an outage for your Linux logical partition. This becomes important when you run infrastructure services, such as an IPv6 router, on this logical partition.

Figure 1 shows a conceptual graphic of the vSCSI configuration:

Here is the process to follow to configure this solution:

Using the raid configuration tool available for Linux, you can easily automate the process of synchronizing the mirror. For this solution, you'd use the mdadm command.

With the logical partition running and isolated from single or double fault due to a hosting partition availability, you are now ready to consider using this partition for an IPV6 router.

This is just an example as this solution could easily be used to perform many network infrastructure services, such as file/print sharing with Samba, firewall capability, etc.

The Linux IPv6 router advertisement daemon (radvd) is used for stateless auto configuration. If you're running an RPM-based Linux distribution, such as Red Hat or Novell SuSE, make sure you have the radvd RPM installed.

Figure 3 shows an example of the radvd.conf configuration file:

Figure 3: This is an example of the radvd.conf configuration file.

Many of these are default settings; your specific settings are the interface and the prefix.
The prefix section in comparing to IPv4 is like telling the client what portion of the address is the network. This example advertises the prefix to clients as a fec0:301:0:1234:: network with a 64-bit mask (also written as fec0:301:0:1234::/64). The double colons (::) indicate that the remaining bits are zeros.

Your interface and prefix will vary depending on your environment; however, the configuration is quite simple as shown here. With this service running on an interface that can communicate with the virtual Ethernet on your i5/OS partitions, you now have stateless auto configuration enabled for your System i.

(Author's Note: Please see the appendix below for a technical explanation of the recovery steps and links to reference materials.)

Daniel DeGroff is a member of the High Availability Center of Competency (HACoC) in Systems and Technology Group. He can be reached by email at This email address is being protected from spambots. You need JavaScript enabled to view it..

If an i5/OS partition that is being used for vSCSI disk in this solution IPLs or is down for any reason, it will cause the mirror to fail. When this happens, you are running exposed, and the mirror will display the failed partition by running mdstat. To recover that disk partition when the target i5/OS partition becomes available again, you need to perform a few manual steps that can be easily automated with the examples given below. From a high level, you need to do the following:

If you don't remove all failed partitions in the mirror(s) before rescanning for the disks on that bus, a disk previously known as sdb may show up as sdc. To make sure you get the same numbering every time, you need to remove all failed partitions in the mirror. Then, to get disks configured dynamically to come back online, you need to remove the failed vSCSI controller and rescan the bus.

If /dev/sdb3, for example, was part of the mirror for the root fs (/) and the hosting vSCSI went down, /dev/sdb3 would show failed in mdstat (/proc/mdstat). However, if you used /dev/sdb2 from that same disk in a swap mirror and you aren't touching swap space, that partition may not show as failed. To make sure you maintain disk order, you have to then manually mark that partition as failed.

The example commands below describe how to perform these steps. With a little bit of logic, these steps could be easily automated in a shell script.

In theory, you could also use vSCSI on a Linux partition to perform software RAID5, for example. However, assuming you are already following the recommended practice on your i5/OS partition and running some level of protection on your ASP (e.g., mirroring or parity), it would be somewhat redundant to do the same on your Linux partition.

The Linux installation should allow for mirroring of swap and other partitions. POWER Linux requires a PREP partition to boot the kernel. This partition may not be mirrored; in this solution, the PREP partition was created on both sides of the mirror with both set to bootable. To replicate the two identical PREP partitions the dd command can be utilized as follows:

Note: This examples assumes /dev/sda1 has been populated with the boot kernel during installation and that /dev/sdb1 also exists as a PREP partition on /dev/sdb and is of similar size.

Since the boot kernel should not change unless upgraded, performing this step once should be adequate. A rescue kernel may be needed in order to change the boot partition. 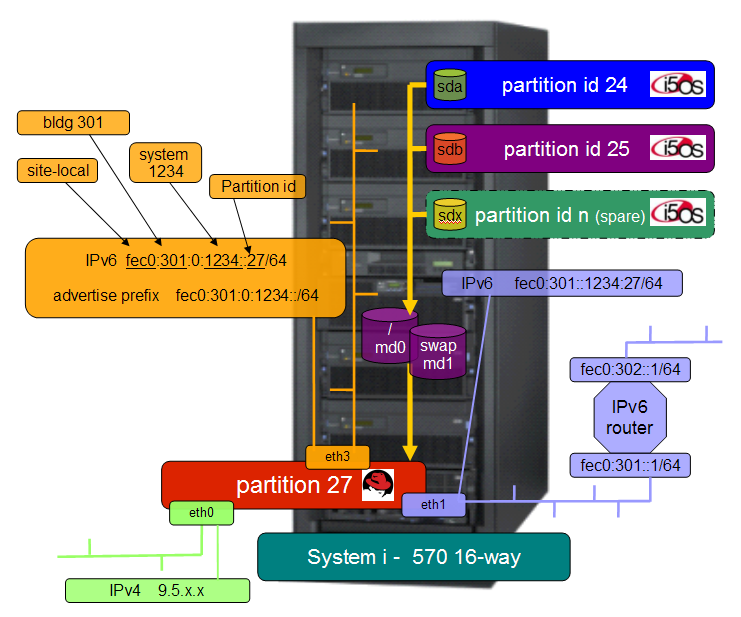 Daniel received his B.S.A. in Electronics Engineering Technology from South Dakota State University (SDSU) and began working at IBM in Rochester, Minnesota , in 2001.

Daniel has published several technical articles for MC Press on topics such as Linux on System I, Firmware Maintenance strategy, and the Hardware Management Console (HMC).

Daniel DeGroff can be reached at degroff@us.ibm.com.
BLOG COMMENTS POWERED BY DISQUS