The use of open-source software has become more widely accepted in today's business world. This is, in large part, because of the increased popularity and reliability of products like Linux-based operating systems and Apache and Tomcat Web servers. The smaller cost (i.e., free) of acquiring open-source software is another reason this is an attractive option. And because open-source software means that the source code itself is freely available, you have the option of modifying the software to meet your specific needs. But operating systems and Web servers aren't the only open-source products out there. With the onset of regulatory initiatives like Sarbanes-Oxley, change management has become a necessary component of any IT organization. In this article, we'll explore using open-source technologies for handling your change management system needs.

Straight from the (Open) Source

Often, the most difficult part of locating the right open-source solution can be knowing exactly where to look for that solution. The premier location on the Internet for locating open-source application projects is SourceForge.net. At the time of this writing, SourceForge.net lists 137,384 active projects. One of the premier open-source software change management applications is the Subversion project. This project was originally developed as a replacement for another popular open-source change management application known as Concurrent Versions System (CVS), which is a means by which multiple developers can work on a single project. In the open-source world, this is a "must have" tool because of the number of developers lending their time and abilities to a project.

Like much of the open-source software available, both of these applications were initially developed primarily for use on the Linux operating system. However, a port of Subversion has been released for OS/400 and i5/OS. This port, developed and supported by SoftLanding Systems, gives iSeries users a way to achieve version control on the iSeries itself over Java and Web development objects. Subversion/400 can be used with WebSphere Development Studio Client (WDSC) and can be integrated with Eclipse using the open-source Subclipse add-in. SoftLanding Systems also released an open-source version of its popular iSeries-based commercial change management package, TurnOver. TurnOverSVN gives iSeries developers source version control capabilities over Java-, PC-, and Web-based development projects. Through this integration into the TurnOver change management product, iSeries developers can now use a single application to handle change management for their legacy (RPG, ILE, etc.) applications along with their Java and Web applications. 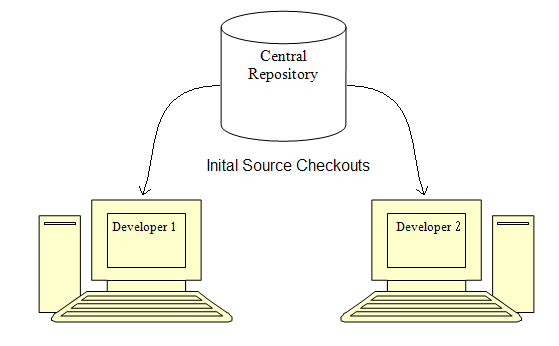 Figure 1: Initial source is checked out from the repository by both developers. (Click images to enlarge.) 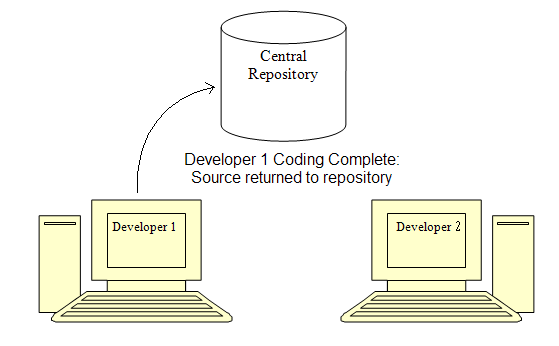 Figure 2: Developer 1 completes coding and returns his version to the repository. 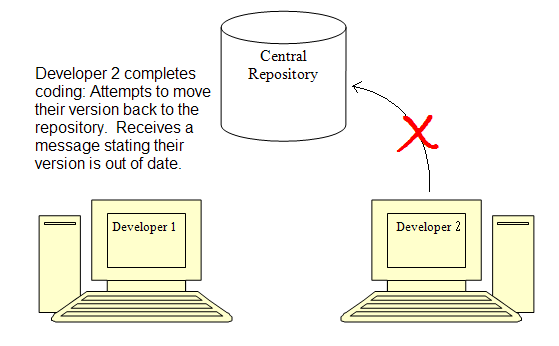 Figure 3: Developer 2 attempts to returns his version, but is informed that his copy is out-of-date. 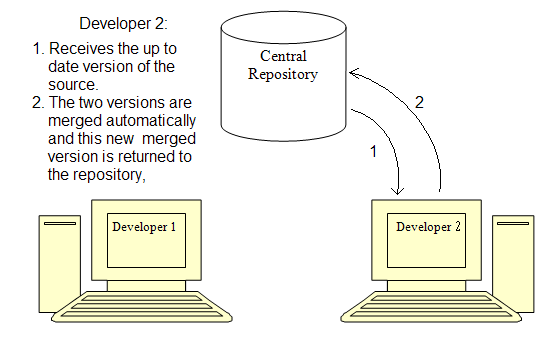 These diagrams illustrate what is a fairly clean method of handling this process. If, however, there are overlapping changes, the merge process will need to be performed manually prior to saving the file to the repository. Subversion acts as a server component, which can be accessed from a variety of clients, including TurnOverSVN. The basic Subversion client is a command-line client called "svn." The additional components are listed in the table below.

The Subversion command-line utility (svn) supports a series of subcommands to perform tasks on objects within a repository. The svn checkout command is used to check out a working copy from a repository. A sample is shown below:

This example performs a checkout from an HTTP-enabled repository to a folder named localfolder.

The svn commit command is used to commit changes made in a working copy back into the repository. A sample is indicated below:

This example commits changes from the working copy along with a log message indicating the reason for the commit.

For a complete list of svn subcommand syntax, see the free Version Control with Subversion PDF.

The svnadmin utility is used to administer Subversion. As with the svn utility, svnadmin supports a series of subcommands to perform tasks. The svnadmin create command is used to build a new repository. An example is shown below:

Again, a complete reference for the svnadmin subcommands can be found in the Version Control with Subversion manual.

While these command line interfaces will get the job done, they're obviously not the most user-friendly option for working with Subversion. Luckily, a multitude of GUI-based Subversion clients are available. One of the most popular for the Windows platform is the TortoiseSVN client. This utility is actually a shell extension to Windows Explorer and adds Subversion functionality that is accessible within any Explorer window. Figure 5 shows how this appears in Explorer. 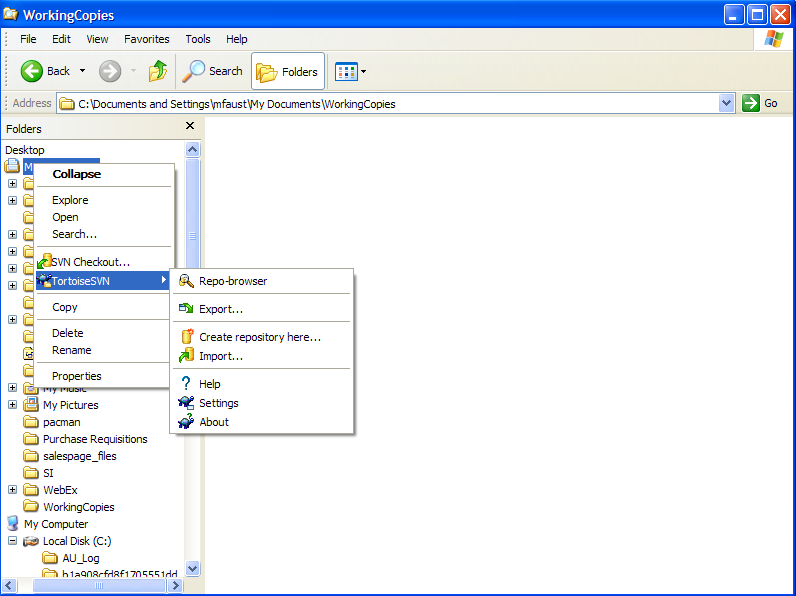 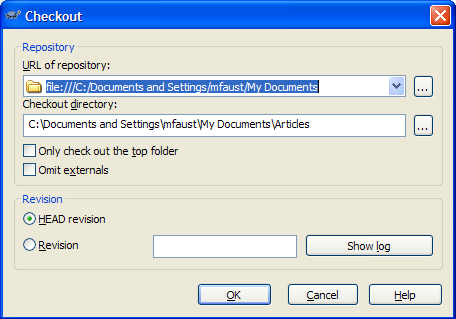 In this example, the repository URL is actually a simple file location, and the checkout directory points to the location where the working copy will be stored. To commit changes to the server, locate the working copy directory and select the Commit option from the TortoiseSVN context menu. The dialog shown in Figure 7 is displayed. 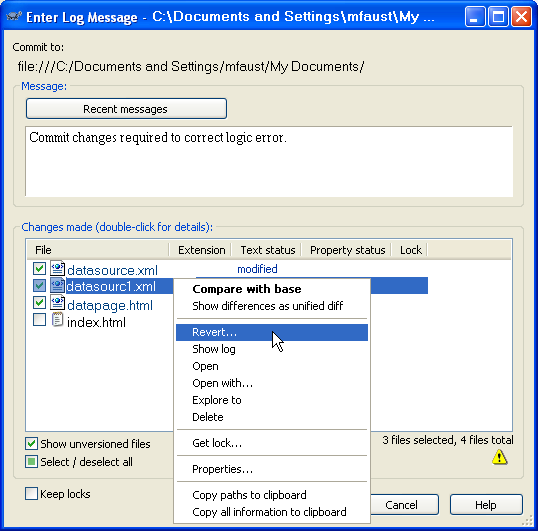 Figure 7: This dialog is displayed for committing a working copy.

This example illustrates the ease-of-use of this type of svn client. In addition to TortoiseSVN, there's also an open-source Eclipse plug-in for performing svn client tasks. This package, called Subclipse, extends the Eclipse interface used by WDSC by adding Subversion client capabilities to allow developers to check out source from a Subversion repository and commit source changes back to the repository when complete. This plug-in can be incorporated into your existing Eclipse workspace through the Help menu by accessing the Software Updates submenu and selecting the Find and Install option. From the wizard, select the Search For New Features To Install radio button and then click Next. From the dialog shown in Figure 8, select the New Remote Site button. 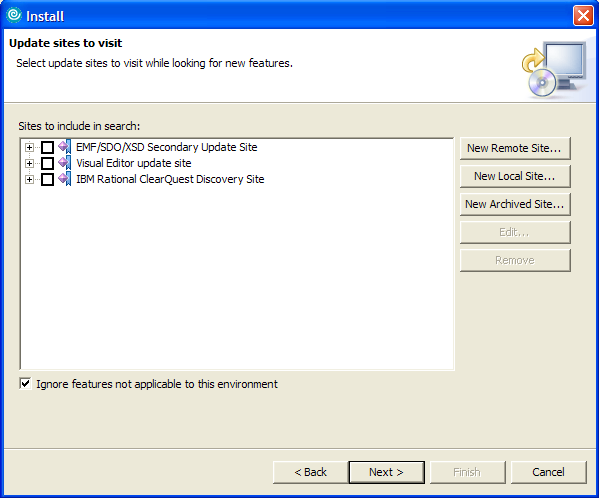 Figure 8: Use this dialog within Eclipse to install Subclipse.

The dialog presented will request a name and URL associated with the site containing the update. Enter the values shown here:

After you accept the license term, the plug-in will be installed automatically. When the wizard completes, you'll be forced to restart Eclipse. At this point, you are ready to work with the Subclipse plug-in by going to the Window menu and selecting the Open Perspective submenu and then selecting Other. The dialog shown in Figure 9 is displayed. 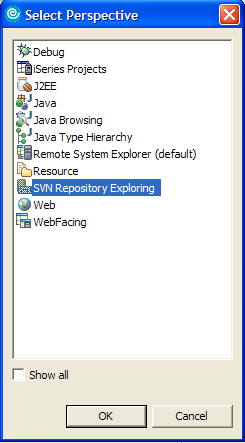 Once you've selected SVN Repository Exploring, you'll have the ability to work with Subversion repositories from directly within the Eclipse workspace. This gives you one central location from which you can build your projects and handle version control.

If you haven't considered using an open-source solution for your change management needs, you really should. The options are endless and limitless. So open your mind to the open-source possibilities.

Mike Faust is Applications Support Manager for Invivo Corp in Orlando, Florida. Mike is also the author of the books The iSeries and AS/400 Programmer's Guide to Cool Things and Active Server Pages Primer and SQL Built-in Functions and Stored Procedures. You can contact Mike at This email address is being protected from spambots. You need JavaScript enabled to view it..