The annual Profound Logic State of IBM i Modernization Survey takes a look at the trends and attitudes that shape the IBM i modernization market.

Editor's note: This article introduces the white paper 2019 State of IBM i Modernization, which is free to download from the MC White Paper Center.

We reached out to the IBM i community, and the response was outstanding: close to 800 people, nearly 300 more than last year, took the survey. This enthusiasm resulted in very interesting findings for how businesses plan to use and modernize the platform in the coming year.

Overall, the attitude toward the IBM i platform is very strong. Traditionally, the negative view of the platform has been a major roadblock to future development and modernization of the platform. This attitude seems to be shifting somewhat, with more businesses having more confidence in the platform than in the recent past. The availability of new modernization and development options – including cloud, open source, and AI – could be reasons why fewer businesses view the IBM i platform as the “dinosaur” they once thought it was. While concerns about the platform – including a diminishing developer pool and outdated interfaces – remain, they aren’t the “platform-killer” they might have been in the past. There are now plenty of ways businesses can address those issues, and ensure that their IBM i has a long, healthy, and modern future.

As you read through each section of the survey, you will see our summary of the results and suggestions for the future. We hope the survey will help your business better understand what is possible for your IBM i platform in the coming year.

CURRENT STATE OF IBM i

What version of IBM i are you using?

There has been a significant increase in the percentage of users upgrading to the most current version of IBM i (7.3) compared to the previous year. This can be viewed as a positive indicator in favor of remaining on the platform and extending its capabilities.

What percentage of your third-party applications use a graphical user interface (GUI)? 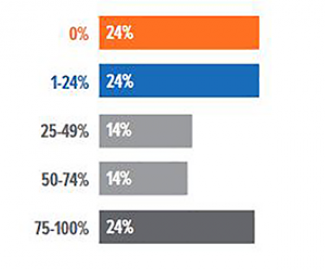 Want to learn more? Download the free white paper 2019 State of IBM i Modernization, which is free to download from the MC White Paper Center.