Looking to develop your first web app with Ruby? Try Sinatra. Sinatra is a DSL for quickly creating web applications in Ruby with minimal effort.

Frank Sinatra—classic music you can tap your foot to while coding. Sinatra the web framework? That's something you can use to quickly create a web app in Ruby with minimal effort. My history with Ruby-based web apps leans more on the RubyOnRails web framework.A framework that is beyond excellent, though, also takes time to learn how to fully use it. Sinatra on the other hand doesn't do as much "magic" as Rails. By "magic," I mean the things that just work and you don't know why. Sinatra simply has more in plain view, like how routing of requests works. In this article, I'll introduce you to Sinatra on IBM i and explain how to install and use it.

First things first. We need to install the sinatra Gem. I always like to store one-off tests like this in their own Gem set. A Gem set is simply a different IFS directory where Gems can be installed other than the default of /PowerRuby/prV2R0/lib/ruby/gems/2.0.0. Run the below two commands in a PASE shell (i.e., CALL QP2TERM) to create a new Gem set directory and then set the GEM_HOME to that same directory.

Next we obtain the sinatra Gem using the gem install command, as shown below. Notice it installed the rack-protection Gem also (as this is a dependency of Sinatra, the beauty of a package manager like RubyGems).

For starters, we're going to do a dead simple web application that conveys the colloquial "Hello World!" response. Open your favorite IFS editor and paste the following code into a file named hi.rb. Note, I put the hi.rb file in directory /home/aaron/sinatra_db.

The require statement is like an RPG /copy and brings in the sinatra Gem capabilities. The get portion is actually a Ruby method call with a Ruby block. Method calls in Ruby can omit the open and close parentheses you see in other languages. The '/hi' portion is the single parameter being passed, and the do through the end is the Ruby block. Ruby blocks are a much longer discussion, though you can learn more here. Essentially, this syntax is declaring that when a request comes in for http://mydomain.com/hi, it will get processed by this block of code and output "Hello World!"

To test our new program, we will need to start the Sinatra web server. Before doing that, we need to tell the Ruby runtime about our newly created Gem set by altering the GEM_PATH environment variable, as shown below.

Now we can invoke the hi.rb program with the ruby binary and pass in the IP address we want it to listen on using the -o option, as shown below. Note, 0.0.0.0 declares to listen on all interfaces. This is the lazy way to start it. If we left the -o0.0.0.0 off, it would instead use localhost, which means the server is only available from the local machine (i.e., the IBM i) and therefore you wouldn't be able to access it from your laptop.

As you can see above, there are now some additional log statements sent to the display to tell us the web server is up and listening on 0.0.0.0:4567. Now open your browser and point it at URL http://<ibmi_ip>;:4567, and replace <ibmi_ip> with that of your own. If you don't enter a path on the URL, then you should get a message similar to the one below, which is Sinatra's humorous way of relaying an HTTP 404 Not Found message. 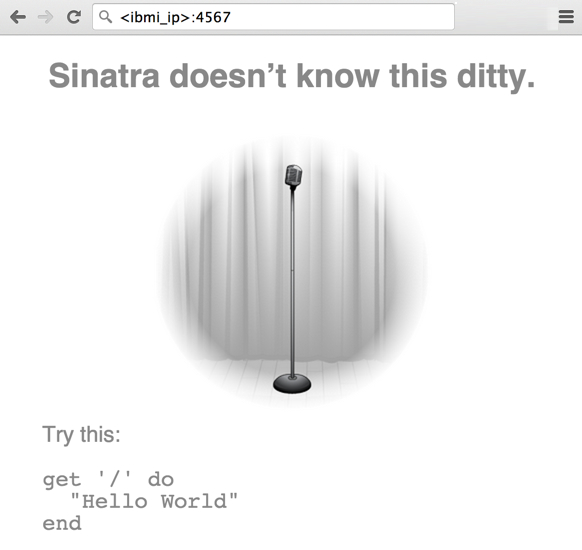 Figure 1: Sinatra returns a humorous HTTP 404 message when path is not found.

Adding /hi to the end of the URL will produce a successful response from our small web app, and you should now see Hello World!, as shown below.

If you go back to your PASE session, you will see a log for each one of your requests to the server, as shown below. This is helpful for debugging purposes once your requests get more complex.

Hopefully, this gives you a good jump start with Sinatra on IBM i. You can get an idea of Sinatra's popularity compared to Rails by going to TheRubyToolbox.com's "Web App Framework" category. I mention this because popularity (which includes frequency of attention by the developers) is something I use to gauge the adoption-level for any given piece of technology. You can also gain additional knowledge of the many capabilities of Sinatra via the documentation pages.