To me, JavaOne 2004 was like a colossal four-day blockbuster movie. Like many of this summer's over-hyped movies, this year's JavaOne certainly had some good points, but it also sometimes fell flat. It had great drama and comedy, and both and bad good performances. It had special effects, close-ups, and a few parts that would have been better off left on the cutting room floor. And like all good (and even some bad) movies, it's set up for a sequel.

I've said it before and I will say it again: If you are in the Java field and can go to only one conference or training session a year, go to JavaOne. There really is nothing else like it in the world. Although in sheer size JavaOne has never rivaled shows like the now-defunct Comdex, it is still the largest gathering of developers for a single platform.

The keynote sessions this year were generally good, but each year they seem to take on a more and more infomercial-like feel, and this year they clearly continued the unfortunate trend. It is all obviously scripted and comes off a bit too condescending. I kept expecting a guy with a thick Australian accent to jump out and show how Java can be used to wax your car. Several of the general sessions were also good, but as in years past, I found it prudent to avoid those sessions that were little more than thinly veiled sales presentations. Always check who the presenter works for before committing your time.

The Birds of a Feather sessions (or BOFs) were some of the best sources for information free of corporate entanglements. BOFs are gatherings of people with similar interests. They are generally smaller in attendance and less formal than the general sessions. But when you have a particular interest, there is no better place to be. In addition to BOFs, the best sources of information at the conference are the attendees themselves. To really get the sense of the Java community, I don't rely on canned sales presentations; instead, I chat with my colleagues to find out what they are doing and what tools they are using. 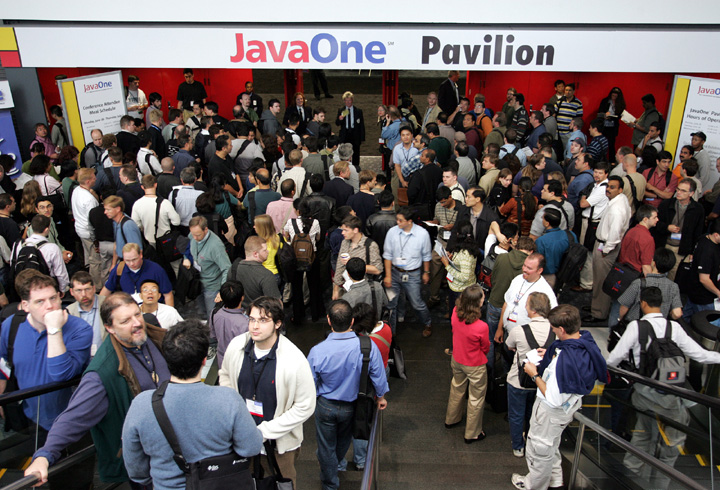 In the best performance category, the award has to go to student pricing. Apple Computer long ago seized on the idea that if you can build a dedicated support base in the educational institutions, then you will have a generation of devout followers. Sun is starting to move in this direction in several ways, including offering low-cost admittance to JavaOne for university students. Under best performances, I also have to mention the four projects that Sun announced it is open sourcing: Java 3D, JDesktop Network Components (JDNC), JDesktop Integration Components (JDIC), and Project Looking Glass. I will talk more about Project Looking Glass in another article. While all of this is good news, it is far short of open sourcing all of Java, which is what most of the community would really like to see. However, it is a step in the right direction, and Sun may just be testing the waters, so I have to give credit where credit is due.

I have been to dozens of conferences over the years and have to say that this year's JavaOne from a logistical standpoint was one of the worst I have ever attended. So I am awarding this year's worst performance award to the conference logistics. I don't know whether this was mostly Sun's fault or Media Live's (the company that puts on the event). The online scheduling system that I have come to rely on was down a lot, and when it was up, I wished it was down because it had so many bugs in it that reverting back to the paper schedules was more efficient--or at least it would have been if they had put one in my press kit (which they didn't). In fact, the online schedule didn't list locations, so you needed the paper schedule anyway. Another gripe I have is that they frequently ran out of food, which was generally a stale box lunch anyway (sandwich wrapped in plastic wrap, an apple, and a bag of chips). The breakfast served before the opening keynote was so well-hidden that I'm surprised that enough people found it for them to run out of food, but enough people found it, and yes, they ran out of food. Sessions were over-crowded and often started late because Sun insisted on bar code scanning every attendee's badge on the way in and sometimes had only one person there to do it. Some sessions had overflow areas, but either the video worked or the audio worked, never both.

A staple of JavaOne in the past has always been the fun activity areas: movie rooms, video game lounges, air hockey tables, and piles of beanbag chairs. These have always worked as great icebreakers to get conference attendees to mix and start talking, which really is one of the main reasons to go to JavaOne. Two years ago, I had the best conversation of the entire conference with a Sun executive while we played air hockey. Unfortunately, the number of diversions this year was greatly reduced, and many of the games were broken. Several of the conversations that I did have with alumni attendees were centered on how they missed JavaOne's good old days.

Flying dukes is one of the cooler aspects of JavaOne, and this year it focused on Java-enabled delivery of T-shirts to the audience. The idea is to build a catapult, air cannon, or some other ingenious T-shirt dispensing mechanism. I submitted an entry this year, but I wasn't picked as a finalist. Oh well, maybe next year,. The 3D desktop was definitely the coolest-looking (although mostly useless) technology shown. It does provide for a richer environment, but do we really need to see what a movie looks like playing from the back side?

Every year, Sun presents one Java-enabled device in what it calls the "Technology Showcase." Conference attendees are offered the device at a great savings, which allows them to dabble in some of the latest and greatest Java hardware. This year's gadget was the HomePod by Macsense. In essence, it is a networked media player. For input, you can use wireless networking, built-in Ethernet, or even USB. For output, it has a pair of built-in speakers as well as standard analog and digital outputs. So what do you do with it? Well, you put this little guy next to your home stereo system, wire him up to your receiver over a digital connection, add him into your wireless home area network, and install a server on your desktop. And why do you do this? Because then you can play all of your MP3 files on your stereo. This all works through the magic of Universal Plug-n-Play (UPnP) and, of course, Java. This is a pretty slick gadget, even though I have already been doing this for over a year on my TIVO. Also, although it is called a media player, it only plays audio.

My favorite session of the conference was Jeffrey Kesselman's Server Architectures for Massively Multiplayer Online Games. I'm an avid gamer, so I couldn't resist a title like that. Besides, gaming has always been one of the areas that has pushed the boundaries of computing. Indeed, the volume of transactions involved in running an online game these days would make the architects of a typical e-commerce solution break out in a cold sweat.

Some technologies just shouldn't make the cut. Back in February, I did a story about Sun Java Studio Creator. While Sun has come a long way on the product, I just don't think it's ever going to gain any real traction in the developer markets. If Sun really wants to create more Java developers, then it should be developing Eclipse plug-ins.

Another item that probably should have been cut was the announcement in the first day's keynote that you could buy Sun hardware on eBay ($1 opening bid). When the house lights were brought up to see how many attendees were interested, very few hands were raised, and the audience's gasp was quite audible. Hey, guys! It's called a focus group. You really should check the water level in the pool before you dive in headfirst.

Here are some interesting numbers from the JavaOne conference. Sun claims to have 4 million Java developers worldwide and says that the total Java-based economy is $100 billion a year. Another interesting number comes from the fact that revenue sources are not always obvious--for example, ring tones are a $3 billion a year industry and are still growing in the handset market and expanding into new markets. Image having a car with downloadable horn tones (should make for rather musical accidents). According to Nokia, there are 250 million Java-enabled handsets in the world and the number is growing by 50% per year. I would slightly challenge this number based on the life of cell phones and the fact that people may be trading in existing Java-enabled phones. Still, that's an impressive number.

JavaOne this year did cover a lot of new and great technologies, some of which I have talked about here and some of which I will cover in more detail in upcoming "Java Journal" columns. These days, every blockbuster spawns at least one sequel, and JavaOne will surely have a sequel next year. In fact, JavaOne 2005 is already scheduled for June 27-30, 2005. Let's hope that Sun learns from some of this year's logistical mistakes and also brings back the fun and excitement of past years.

Michael J. Floyd is the Engineering Director for DivXNetworks. He is also a consultant for San Diego State University and can be reached at This email address is being protected from spambots. You need JavaScript enabled to view it..

Michael J. Floyd is the Vice President of Engineering for DivX, Inc.