Well, here it is, my first monthly column on Java, or should I say your first monthly column on Java. Why is it your column? This is your column because you are going to help me select the topics. Over the past several years, Java and its related technologies have grown and flourished at an amazing rate. With so many APIs, tools, and extensions being released and talked about, it's easy to come up with topics, but I want this column to be something more than just a look at the latest cool thing. This column will be about what is important to you. Whether that is the latest cool thing or an overlooked technology that has been around for a while doesn't matter, because I will select my topics based on your input. So how will I know what is important to you? I'm hoping you are going to tell me. Shoot me an email at This email address is being protected from spambots. You need JavaScript enabled to view it. and tell me what is important to you.

So who am I? Well, since I'm going to be your guide through the Java jungle, let me tell you a little bit about myself. My first computer was an Atari 800 with 64K of RAM and a floppy drive that held so little information that it probably would have been more efficient to just write small on its 5.25-inch paper sleeve. Later came an Amiga, then a couple of Macs, followed by more PCs than I can possibly remember. With each new system came new languages and more and more potent tools.

I have a B.S. and M.S. in Computer Science from San Diego State University, where I have also taught graduate level programming courses. In my academic career, I specialized in computer languages. Currently, I work for DivXNetworks, where I work on both the client and server side of a Video on Demand (VOD) system. Along the way, I have worked on projects for the US Navy, Boeing Aircraft, Apple Computer Europe, United Airlines, and San Diego State University. Through my career, I have learned three things about myself that I think will make me your perfect guide:

Back in February, when Sun Microsystems released the Java2 Platform Standard Edition (J2SE) Version 1.4, there was a lot of talk about the new performance improvements, SSL, LDAP, CORBA, XML, new GUI controls, and integration with Java Web Service, but somewhere buried among a landslide of acronyms was the unassuming "new deployment options," which was Sun's underwhelming way of introducing Java Web Start to the masses. I guess you can't hype everything all the time.

Java Web Start is a simple way to make sure your users are always running on the latest version of your applications. Before Java Web Start, there were three basic ways of making sure your users were always using the latest version of your software. The first way was to deploy your applications with an HTML interface and keep all of the logic on the server side. This was an awkward solution because HTML interfaces can be limiting and slow. They also tether you to the server, keeping you from working offline. The second way was to deploy your application as an applet, but applets were often too constrained by security to be useful and required the installation of a Java plug-in. The third way to deploy, and the way I have always done it, was to embed your own version checking system within a Java application. These applications usually came with their own often-bulky-and-slow installers. These installers usually asked a series of inane questions that users usually accepted all the defaults on, assuming of course that they were able to remember what directory they had downloaded the new installer to. Then, each time the application launched, it would make a call to a server to authenticate its version number and instruct the user where to download the next version if available. When a new version of the application was available, the user would have to download and run the new installer and yet again answer the same set of inane questions. 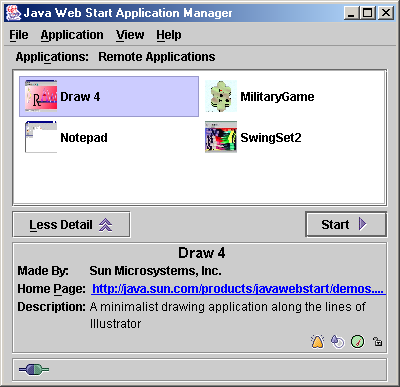 Java Web Start Application Manager has several other useful advanced features, such as being able to configure which Java Runtime Environment to associate with each application and the ability to set up proxies for Web connections. If your users are used to desktop or start menu shortcuts for starting their applications, you can configure Java Web Start Application Manager to create them automatically. Also, applications can be digitally signed, and the user will be prompted to manually grant or deny permission to an application that attempts to violate the standard "sandbox" security profile. Last but not least, you can also configure each of your applications to launch with a console window and/or log all output to a file. This can be very handy for debugging deployed applications. You can have a user turn on logging, run through a script, and then email you the log file--all with just a few simple clicks.

This all sounds great, but are there any disadvantages? Well, I have encountered only one, and it is pretty minor. In order to bootstrap all of this automatic functionality, you of course have to install Java Web Start using one of those inane question-asking installers. The good news is that J2SE Version 1.4 installs it automatically for you; it even puts a shortcut on your desktop. Or if you want to use Java Web Start without installing J2SE Version 1.4, you can install just Java Web Start from here.

So you're familiar with Java Web Start, which on the surface seems like a pretty trivial utility, but it allows you to drastically improve your end users' experience. It is packed with features that enable you to easily manage how Java applications are deployed and updated. It also allows you to use true Java applications that are not bogged down with version checking code and installers. In addition, and most importantly, it provides a better user experience than applications written using HTML interfaces.

Where Do We Go from Here?

It's an exciting time to be a Java programmer. Gone are the days of worrying about major API and language specification changes. Also gone are the days of wondering if Java was for real or just an interesting fad. The tools are powerful, and the extensions and utilities are rich and mature. Java has scaled up to the largest enterprise application servers and down to cell phones and PDAs, and it also runs on everything in between. So what part of the Java jungle should we explore together next? Here are just a few ideas:

If you don't see the topic you are most interested in on the list, email it to me at This email address is being protected from spambots. You need JavaScript enabled to view it.. Thanks and I hope to hear from you soon.

Michael J. Floyd is a Senior Software Engineer and Extreme Programmer for DivXNetworks and consultant to San Diego State University. He can be reached at This email address is being protected from spambots. You need JavaScript enabled to view it..