If you've ever needed to create documentation, instructions, or Web pages, you've probably experienced the need to be able to grab all or a part of a screen as a picture you can paste into a document. My career has had me doing this for years, and, over time, I've come to have a few favorite techniques. HyperSnap-DX has long been a favorite, but, unfortunately, it costs money, so not everyone has it. Until recently, I had found the freeware screen capture tools to be too unsophisticated to do what I needed, but then I found a great freeware screen capture tool that everyone should have.

Windows itself has the ability to capture the screen as a bitmap on the clipboard simply by pressing Alt-Print Screen. You then can paste the image into a program like Word or Paintbrush. Unfortunately, the captured screens are very large bitmaps, and there are numerous desirable features that are not provided. As usual, third parties have jumped in to fill the gap, and their utilities do a few things that are essential.

Good screen capture programs will let you automatically save the capture to the disk in a common file format of your choice. I usually choose PNG or GIF, since they are both lossless (meaning no picture detail is changed during compression). PNG has better compression and can accommodate more colors than GIF, but it's not as quite as widely supported, especially in older programs. Other common formats are JPG, TIF, and BMP. (Since JPG-formatted bitmaps often have artifacts [random dots] introduced during the conversion process, I prefer not to use that format.) Good programs will also let you choose the save directory and provide automatic numbering of filenames, so consecutive captures can be done without having to mess with the program.

Another important feature is the ability to capture just a part of the screen, which is something Alt-Print Screen won't do. Good screen capture programs let you grab the whole screen, a particular window, any rectangular area on the screen, and even irregularly shaped screen areas. Usually, the type of selection is associated with hotkeys that work in any application. You press the key combo to select the type of capture to do and then use the mouse (if necessary) to select what on the screen to capture.

In addition to these essential features, some programs will let you do additional processing on the captures. Among the more useful of these is the ability to draw arrows, circles, and other shapes to highlight items on the screen. You can also then add a text box to provide further information. This functionality can be very useful to point out exactly what on the screen needs attention. Figure 1 shows an example. 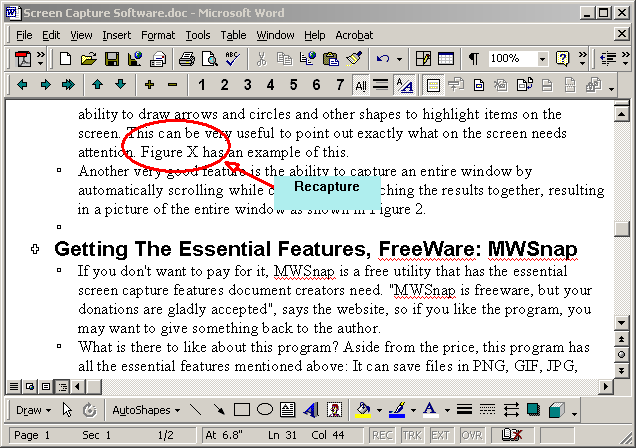 Another very good feature is the ability to capture an entire window by automatically scrolling while capturing and stitching the results together, resulting in a picture of the entire window as shown in Figure 2.

Figure 2: Some third-party screen capture tools will scroll the window automatically to capture an entire page!

MWSnap is a utility that has the essential screen capture features document creators need. And if you don't want to pay for it, it's free. "MWSnap is freeware, but your donations are gladly accepted," says the Web site, so if you like the program, you may want to give something back to the author.

What is there to like about this program? Aside from the price, this program has all the essential features mentioned above: It can save files in PNG, GIF, JPG, BMP, or TIF format and can automatically increment the filename in the directory that you specify. It also copies your captures onto the clipboard, so you can immediately paste them into your documents. In addition, it allows you to capture the full screen, a window, a rectangular region, or a fixed-size region. When you do the capture, a zoom window pops up so you can fine-tune what gets captured.

I have been using HyperSnap-DX since forever to capture the screens for my writing. Like MWSnap, it will automatically capture various portions of the screen to a file with the name and format you specify, and it also copies the image to the clipboard automatically for easy pasting. In addition, it can capture screens from a wide variety of screen types and resolutions, and it allows you to annotate the captures using some basic drawing tools. It can also capture long vertical windows, creating a single graphical file out of pages that are too big to fit on the screen.

As you can see, screen capture programs are a very valuable addition to your communication toolset. There are free options, and there are commercial options, and I've detailed a few of them here. How do you capture screens? Can you point out any that you've tried and liked/disliked that you can comment about? Did this article help you at all? Hit the Discuss This Article link below and share your thoughts/experiences!

Brian Singleton is a freelance author and Web community developer. He can be reached via his site at www.bsing.com.

Brian Singleton is former editor of Midrange Computing. He has worked in the IBM midrange arena for many years, performing every job from backup operator to programmer to systems analyst to technology analyst for major corporations and IBM Business Partners. He also has an extensive background in the PC world. Brian also developed a line of bestselling Midrange Computing training videos, authored the bestselling i5/OS and Microsoft Office Integration Handbook, and has spoken at many popular seminars and conferences.