Establishing a Db2 server or database connection and a look at transaction processing.  Read Part 1 here.

Editor's Note: This article is excerpted from chapter 6 of QuickStart Guide to Db2 Development with Python, by Roger Sanders. 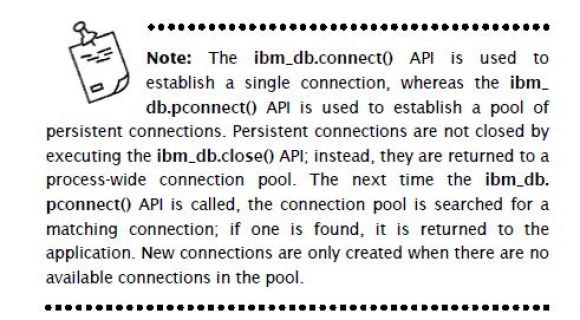 You can find the syntax for these APIs, (as well as the other APIs in the ibm_db library) in the IBM Db2-Python GitHub repository. That said, the most common way of executing these APIs is by providing a connection string for the first input parameter. The connection string used must adhere to the following format:

dbName                  The name of the Db2 server or database the connection is to be made to. This option is only required when connecting to a Db2 database.

userName                The username/ID that is to be used for authentication purposes when the connection is first established.

Thus, if the ibm_db library is used, the Python code needed to establish a connection to a database named SAMPLE with the user ID “db2inst1” and the password “Passw0rd” would look something like this:

# Define And Initialize The Appropriate Variables

# Construct The String That Will Be Used To Establish

# Attempt To Establish A Connection

If the ibm_db_dbi library is used, the Python code needed to establish the exact same connection would be very similar; the following code snippet highlights the changes that would be required:

# Attempt To Establish A Connection

Once a Db2 server or database connection is established, it remains in effect until it is explicitly terminated or until the application that established the connection ends.

The bulk of the work that is performed by most Python applications that interact with Db2 servers and databases revolves around transaction processing, which is where SQL statements are passed to the appropriate server or database, via API calls (ibm_db library) or object methods (ibm_ db_dbi library), for execution. This is also where operations performed against a Db2 database are made permeant or backed out, and where the results of SQL queries are retrieved. Depending upon which Db2 Python library is used, there can be two ways in which SQL statements are executed: 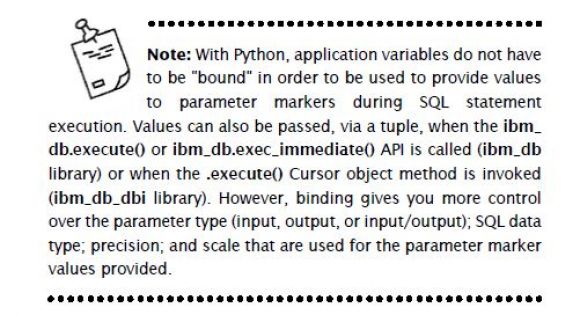 The following pseudo-code example illustrates how an application variable would be bound to a parameter marker that has been coded in a simple SELECT statement. It also illustrates the way in which a value would be provided for the bound parameter before the statement is executed:

# Define And Initialize The Appropriate Variables

# Construct The String That Will Be Used To Connect

# To A Database, Then Establish A Connection

# Define The SQL Statement To Be Executed

# If The SQL Statement Could Not Be Prepared

# Display An Error Message And Exit

print("Unable to prepare the statement.")

# Assign A Value To The Appropriate Variable

# Bind The Variable To The Parameter Marker

# Retrieve And Print The Records Produced