This in-depth discussion about the IBM i job switches may reveal surprising—and helpful—information.

The design of the job switches can be traced back to earlier IBM midrange systems such as System/3, the first generation of IBM midrange systems built in-house. As more and more native or open-standard IPC mechanisms have been introduced to IBM i's ancestors and IBM i, people started forgetting this ease-to-use and efficient work management technique. I admit this technique is old, but old does not mean not good.

If you are unfamiliar with the concept of job switches, here's a brief explanation of this concept: Job switches are a group of eight logical values that can be used to pass information to a submitted job or to exchange information between programs running in the same job. Note that the term logical value means either '0' (false) or '1' (true), but not other character values.

Passing Information to a Submitted Job via the Job Switches

The job switches can be used as a convenient way to pass information to a submitted job. When a job enters the system, the initial job switches value can be set via the following ways:

To specify the initial value of the job switches of a submitted job, you have two choices. You can specify the SWS parameter in a SBMJOB command directly like this:

Or you can set the JOBD parameter to a JOBD object that contains the wanted SWS value like this:

Additionally, you can also set the initial job switches value of a job (either a batch job or an interactive job) started under a specific user profile via the SWS parameter of the JOBD of the user profile. Like to see a real usage example of this? The following is a post from Albert York in the MIDRANGE-L mailing list at midrange.com:

Re: How to set user profiles for multiple time zones.

* Subject: Re: How to set user profiles for multiple time zones.

Years ago I had a similar problem, only I had multiple time zones. I used job descriptions which I assigned to the user profiles. Then I used the job switches in the job description to indicate which time zone they were in.

The CL switch built-in function (%SWITCH) tests one or more of the eight switches of the current job under an 8-character mask and returns a logical value of '0' or '1'. The syntax of the %SWITCH built-in function is this:

Each position in the mask can be specified as one of three values: 0, 1, or X.

For detailed information on the %SWITCH built-in function, please refer to the CL overview and concepts.

Job switches are referred to as User Program Status Indicator (UPSI) switches in IBM i COBOL documents. In OPM and ILE COBOL, the eight job switches are supported as external switches UPSI-0 through UPSI-7. You can test a specific job switch as a switch-status condition or set a job switch on or off via a predefined mnemonic name associated with the job switch. Please refer to the ILE COBOL Language Reference.

APIs that perform special functionality is good for all high-level languages (HLLs), since we can call an API from all HLLs. The following work management APIs can be used to retrieve and set the job switch settings of the current job or another job, respectively:

By now, we know that the job switches offer an easy-to-use technique to pass information to a submitted job or to exchange information among programs running in the same job. We've also seen different ways to make use of them. So why should we go forward another step into it? The reason is very simple: there are still exciting things hiding behind the job switches.

When a job becomes active, a QWCLUWA space object is provided to the job by the system, and the space pointer addressing the start position of its associated space is stored in the job's Process Communication Object (PCO) at offset hex C0, as shown in Figure 1. A user program can address the LUWA via this space pointer directly or via the space pointer returned by the _LUWRKA system built-in. Similar to the Local Data Area (LDA) objects, the QWCLUWA space objects are managed by the system and are reused to serve different jobs.

Figure 1: How do we locate the current job's LUWA?

The structure of LUWA and the prototype of _LUWRKA are documented in the C header, QSYSINC/H.MILIB (see Figure 2). The corresponding definitions in RPG can be found in https://i5toolkit.svn.sourceforge.net/svnroot/i5toolkit/rpg/mih-pgmexec.rpgleinc.

The following piece of code is extracted from QSYSINC/H.MILIB. 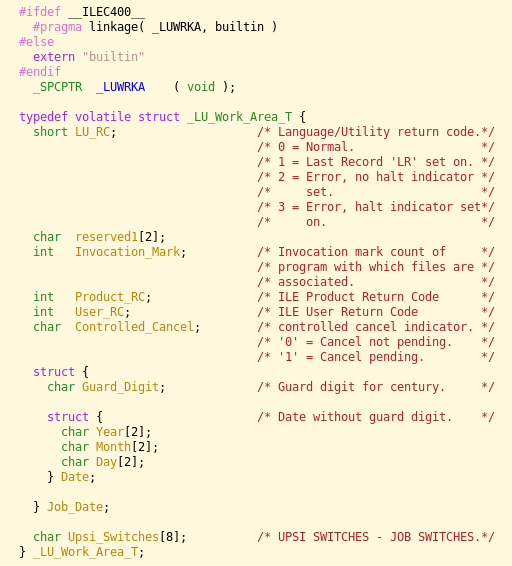 Figure 2: These are the C declarations of the structure of LUWA and the _LUWRKA system built-in.

I failed to find more detailed documentation on the LUWA fields. But it would be an interesting exercise to discover the exact meaning and usage of each LUWA field by tests. For example:

For HLL programs, accessing the LUWA of the current job is quite straightforward. The following is an example of retrieving the current job switches settings via the _LUWRKA system built-in, t177.rpgle.

The Spare Storage in QWCLUWA

As mentioned above, the size of the associated space of a QWCLUWA space is 4KB, and the LUWA uses only the beginning 32 bytes of it. Consider the facts that the life cycle of the storage in QWCLUWA is the same as the job's active phase, and the QWCLUWA is accessible from all programs running in the same job. Can we make use of the spare storage in QWCLUWA to implement our own work area, to store data that is expected to have the same life cycle as the job, or to share information among multiple programs running in the same job?

When an IBM i job leaves the active phase, the QWCLUWA space object allocated to it is returned to the system. The system re-initializes the contents of the associated space of QWCLUWA. Pay attention that not the whole 4K bytes associated space is initialized! At V5R4, the system initializes only the beginning 80 bytes of the associated space of a QWCLUWA space, and the 48 bytes following the LUWA is cleared to hex 00. So it is recommended that you clear user data items you've stored in the spare storage in the QWCLUWA when they're no longer used, since they will become dirty data for other jobs that would reuse the QWCLUWA object.

First, I learned the _LUWRKA system built-in and the Language/Utility Work Area from a post of Gene Gaunt's in the MI400 mailing list at midrange.com. Thank you, Gene! I learned so much from you!

Second, after reading this article, someone might come up with the following question: If what I need is only to exchange information among programs running in the same job, why not store it in static storage or heap storage? Why should I use a technique that is as old as System/3, which was born in 1969? The reason is quite simple: static storage and heap storage are activation group-based storage and might go away due to the end of the activation group in which they are allocated or an unintended resource reclaiming operation. For example, an ILE activation group (a non-default activation group) can be deleted by the Reclaim  Activation Group (RCLACTGRP) command or by a resource-related exception raised in the activation group, e.g., the Commitment definition not found (CPF8350) exception, or the I/O operation was applied to a closed file (RNX1211) exception. Storage managed by the default activation groups can be reclaimed by the Reclaim Resources (RCLRSC) command, the Transfer Job (TFRJOB) command, or the Reroute Job (RRTJOB) command.