Procedures are part of modules. A module can contain one or more procedures.

Editor's note: This excerpt is from chapter 3 of Evolve Your RPG Coding: Move from OPM to ILE ... and Beyond.

The previous chapters explored some theory. Now, it's time for some hands-on work. Let's leverage your OPM RPG knowledge with a simple and practical example of using procedures.

If you are an experienced RPG programmer, you might argue that the OPM scenario presented in chapter 1 and shown in Figure 3.1 is too old-fashioned and simplistic. 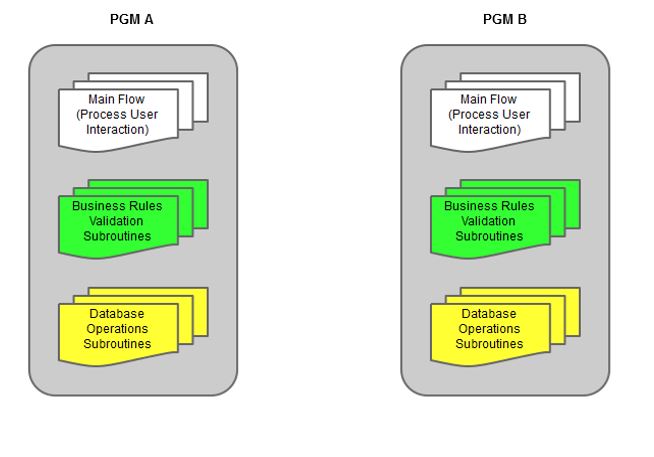 You are right, of course. Even in OPM, it's possible to avoid duplicating the same code over and over again in multiple programs. To be fair, a more accurate scenario would be the one depicted in Figure 3.2, in which the code related to business rules is isolated in several standalone programs (BR1, BR2, … BRx). These programs are called as needed by programs A and B. 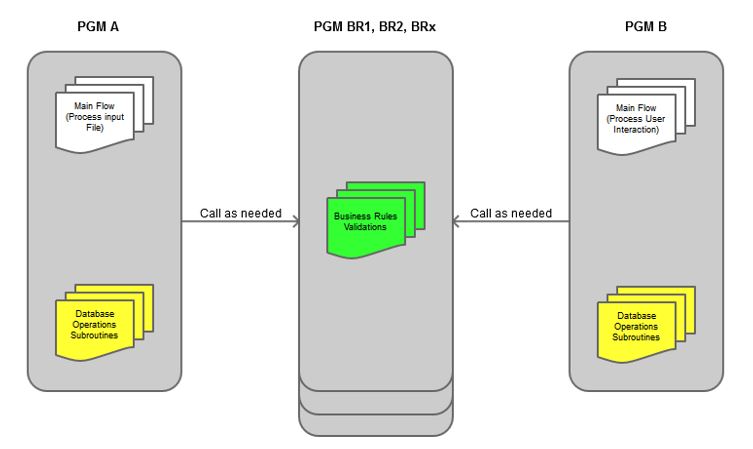 How to Build Your First Procedure, Using Your OPM Knowledge

I'll use the more realistic and up-to-date scenario in Figure 3.2 as my starting point for the creation of a simple procedure. I'll stick to the scenario described in the first chapter: programs A and B both handle inventory, but they do slightly different things. While A imports inventory items from a cargo manifest CSV file, B handles the user inventory management via screen interaction. They both use some of the same business rules, which I've isolated into programs BRx in this new scenario.

Let's say that BR1, one of those programs, translates the supplier's item ID into the company's item ID. PGM A would call BR1 whenever it needs to import a new item, passing the external item ID and supplier ID codes, and receiving the internal item ID. This means that a PLIST would be defined in PGM A to call BR1 with the necessary variables:

The structure should be familiar, so let me just explain the parameter names:

Now let's transform BR1 into a procedure, step by step.

To use a procedure, I need to "tell" the program how to call it, the same way I would do for a program. For that, I'll use something called prototype definition. This definition must be used in every program or service program that uses the procedure. Since the idea here is to reuse code instead of duplicating it, I usually create a source member in a separate source file, named QCPYLESRC, with all the module's procedure prototypes. I then include it in the program or service program where I need to use it, via a /COPY or /INCLUDE instruction. In fact, as you can see below, the prototype definition (shown as part of the QCPYLESRC/BR_INV_PR source member) is actually quite similar to PLIST:

Then, all I need to do is include this definition in my program/service program, using either /COPY or /INCLUDE:

Later in this chapter, I discuss which to choose, depending on the situation.

Just a note about the procedure name: instead of BR1, I'm using a (slightly) clearer name for the procedure: CvtItmID. I like to use a verb to identity the procedure type ("Cvt" being short for "convert" in this case), followed by the subject ("Item ID"). You could argue that Convert_Item_ID would be even clearer (and you'd be right!), but it's important to avoid getting carried away with long names. Besides, Convert_Item_ID wouldn't "fit" in the space reserved for the function name in the D-line (although that's not really a problem). In the next chapter, you'll learn how to solve this "problem." For now, just keep in mind that you need to find the right balance between readability and maintainability. Excessively long names cost you additional time while coding. They also increase the chance of misspelling when you need to call the procedure (especially if you still use Source Entry Utility—SEU).

Speaking of calling, the way to call a procedure also differs from calling a program:

CALLP is used instead of CALL, and the parameters follow the procedure name enclosed by parentheses and separated by a colon, just like in a built-in function. You can also use a slightly different notation, similar to a program call with parameters:

OK, that's how the procedure is defined and called. Now let's see how to create it! Here's an example of a simple procedure structure, without the actual code:

As I explained in chapter 1, procedures are part of modules. A module can contain one or more procedures. This means that the compiler needs to know where each procedure begins and ends. The P-lines you see above delimit the CvtItmId procedure. Note that the first P-line, which contains the procedure name (positions 7 to 21) also has the keyword EXPORT. This means that this procedure will be exported by the module with the CvtItmId. (Since RPG is case insensitive, you can and should use mixed case or some other form of writing to make names more easily understandable, but for RPG, it really doesn't matter.)

The EXPORT keyword means that this procedure will be available to the programs and/or service program that are bound to this module. This line also has a "B," indicating the beginning of the procedure. Similarly, the other P-line, which ends the procedure, has an "E" in the same position, thus telling the compiler that the code of the procedure is contained between the two P-lines.

Finally, there would be a bunch of C-lines containing the actual procedure code, just like in a regular OPM program. One of these lines would assign a value to P_IntItmID, thus allowing the procedure to return the internal item ID to the calling program, just as it would in an OPM program.

Learn more with the book Evolve Your RPG Coding: Move from OPM to ILE ... and Beyond.