I wrote an article called "How to Create, Compile, and Use Service Programs," which is about the basics of how to create a service program. The process of creating a service program is very similar to creating an RPG program, except that there's no need for a main procedure and you use a different command (CRTSRVPGM) to compile your service program.

The service program that was created in the article contained two procedures that are used to encode and decode special HTML characters called htmlEncode and htmlDecode, respectively. These procedures could be very useful and are generic enough to be used in multiple programs. We'll be using the code from that article to illustrate the usefulness of the binding language to easily support service program modifications.

Suppose you have a bunch of programs now using your service program. It's working well, but you've decided to modify its functionality perhaps to prevent SQL injections or to filter profanity from being entered into your database. This would simply be a logic change and would not impact the attributes of your procedure's name or parameter list.

For our coding portion, we will modify our program to replace the offending code during the database input and also send out a notification for appropriate staff to investigate the potentially abusive or offensive intent.

There are a lot of potential SQL commands that you could monitor for when parsing your input. For this example, we'll look for only one, which is "DROP TABLE". When the program finds these words within the input data, the words will be replaced and reported with a blank.

For our profanity example, I'll pick a random word to represent the obscenity so as not to actually post profanity in this article. As a purely random selection, I'll designate "Microsoft" to be considered a bad word. This word will be looked for, replaced with a constant value of "<PROFANITY>", and reported.

When you prompt the RTVBNDSRC and CRTSRVPGM commands, you will see that the default name expected for your binder source is QSRVSRC, so that is what I've used. When you retrieve the source, there is no source type assigned, but if you assign the BND source type, then you could use the source entry utility (SEU) and the Rational development tool to recognize the syntax as seen in Figure 1 below.

Figure 1: Use the source entry utility (SEU) and the Rational development tool to recognize the syntax. (Click images to enlarge.)

In the binding source in Figure 1, the symbol names are surrounded with quotes, which are unnecessary. The quotes indicate that the name is case-sensitive, but all RPG procedure names are seen as uppercase, so the quotes are not required.

If you execute the DSPSRVPGM command on your service program, you can see that the signature is equal to what is currently assigned to the service program. 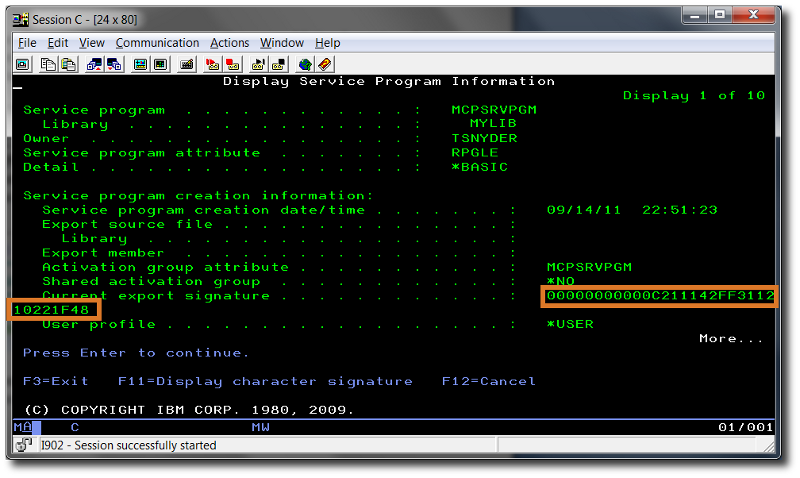 The following binder source is the result of what my binder source would look like, but this is purely preferential for what I believe to be more readable. You're going to need to touch the binder source anyway if you want to keep the same signature as you add more procedures, so why not make it as readable as possible?

I like to use camel case naming for my procedures and variables for code readability, so I would typically remove the quotes to have the export names match my procedure names, but this is optional.

Because we're not using any embedded SQL in our service program yet, we can save the source file as RPGLE and use the CRTRPGMOD command to create our RPG module.

After we have our module created, we can create the service program from the module with the CRTSRVPGM command, specifying the SRCFILE as QSRVSRC to utilize the binder source during the compile. 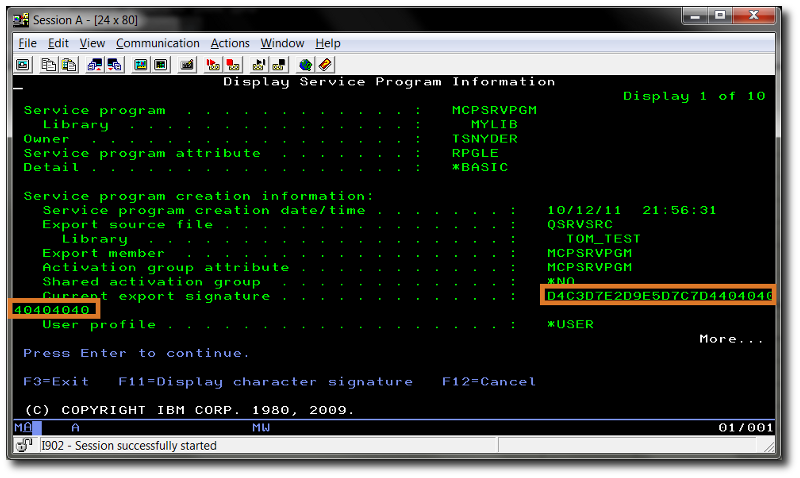 Figure 4: DSPSRVPGM verifies that the binder source was applied to the service program.

At this point, we know that we can recompile the service program as many times as we want.

Now let's finish up by modifying the code for the htmlEncode procedure to filter some profanity and SQL injection threats mentioned above.

This is a minimal example program. If I were to really check for these keywords, I would convert the incoming text to uppercase to compare against the specific matches. I would also strip any extra spaces from the incoming text because SQL can work with multiple spaces in between DROP and TABLE. But this is just a high-level conceptual example. You could take it much further.

Now we test out the new code with some special content:

After modifying and compiling the program, you get the following output. You can then recompile the service program multiple times, and the main program will continue to work without a need to recompile it.

You can download the code for this article here.

This was the second article in a three-part series on using service programs. In my next article, I'll close the series with a discussion on binding directories.

"How to Create, Compile, and Use Service Programs"

Thomas Snyder has a diverse spectrum of programming experience encompassing IBM technologies, open source, Apple, and Microsoft and using these technologies with applications on the server, on the web, or on mobile devices.

Tom has more than 20 years' experience as a software developer in various environments, primarily in RPG, Java, C#, and PHP. He holds certifications in Java from Sun and PHP from Zend. Prior to software development, Tom worked as a hardware engineer at Intel. He is a proud United States Naval Veteran Submariner who served aboard the USS Whale SSN638 submarine.

Tom is the bestselling author of Advanced, Integrated RPG, which covers the latest programming techniques for RPG ILE and Java to use open-source technologies. His latest book, co-written with Vedish Shah, is Extract, Transform, and Load with SQL Server Integration Services.

Originally from and currently residing in Scranton, Pennsylvania, Tom is currently involved in a mobile application startup company, JoltRabbit LLC.