Inner joins, outer joins, exception joins, cross joins... Do you know how to take full advantage of all the types of joins?

Editor's Note: In this excerpt from SQL for eServer i5 and iSeries, author Kevin Forsythe explains how to use the various joins available in SQL.

In SQL, the basic SELECT statement displays one or more columns from a single file. When columns must be merged from two or more files, a join should be used. There are two ways to accomplish this. A join can be written either with or without the JOIN keyword. Creating simple joins is easy enough, but as they get more complex, using the JOIN keyword becomes more attractive.

Join Without the JOIN Keyword

Creating a simple join that pulls two columns from different files is easy. Simply include each column name in the SELECT clause, include both files in the FROM clause (separated by a comma), and add a WHERE clause that indicates how the data is matched up between the two files:

Notice that the customer number fields in the WHERE clause are spelled differently. Had they been spelled the same, a different syntax would be required. When more than one file in the SQL statement contain field names that are spelled identically, a correlation name should be provided to identify in which column the referenced file exists:

Any number of files can be joined together in this fashion, although performance will degrade as the number of files increases. This style of join is an inner join, and it is illustrated in Figure 1. 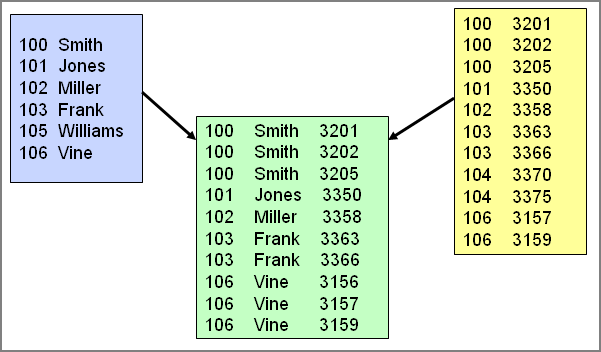 Only records that have a match in both files are included. Other kinds of joins are discussed below.

The JOIN keyword allows for both a simpler and more flexible syntax for joining files:

This SQL statement functions exactly the same as the previous example, but it uses the JOIN keyword to explicitly identify the type of join being performed. The WHERE clause is replaced with the ON clause, which explicitly identifies the comparisons used to connect the data in the files being joined. This separation allows the WHERE clause to be used exclusively for record selection, thus making the statement much easier to read. This syntax also allows the join types listed in Figure 2 to be implemented more easily. 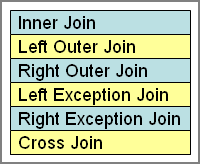 The left outer join uses the ON clause to filter which records to include in the result table from the "right" or second file listed. The ON clause is not applied to records from the "left" file. This is useful when you want all the records from a given file, whether the joined file has data or not. Consider the example given in Figure 1. In that example, only those customers who had orders in the order master were included in the result table. What if we had wanted to list all customers, even if they had no orders? The following SQL statement accomplishes that:

This statement is similar to the previous inner join example, but in this case, customer number 105 is included in the result table, even though there is no order for that customer. On the other hand, customer number 104 is not included, because it does not exist in the Customer Master File, which is the "left" file. Figure 3 illustrates this technique. 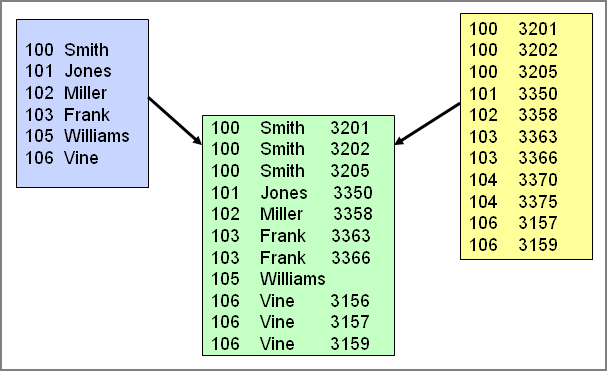 The right outer join uses the ON clause to filter which records to include in the result table from the "left" or first file listed. The ON clause is not applied to records from the "right" file. This is useful when you want all the records from a given file, whether the joined file has data or not. In the previous example, all the records from the Customer Master File are included, whether those customers had orders or not. What if the reverse was wanted? By simply changing the keyword from LEFT OUTER JOIN to RIGHT OUTER JOIN, the behavior of the SQL statement is reversed. Consider the following SQL statement: 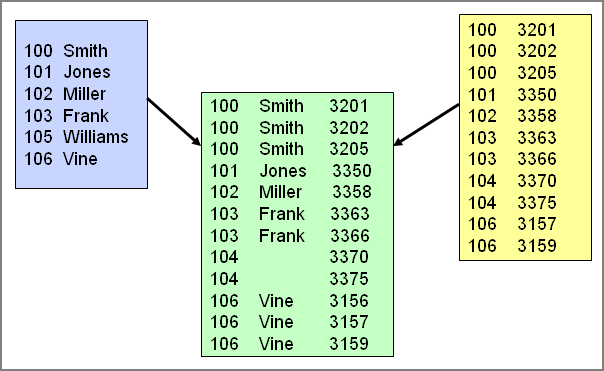 Corruption often creeps into any company's database. How many times have you heard--or even seen for yourself--that during a conversion to a new software package, a company finds that it has a large amount of invalid data in its database? What can be done to avoid this in your database? If you have the ability to modify the structure of your database, you can consider adding constraints (which are discussed in the book). If you can't use constraints to prevent corruption from weaseling its way into your database, then the next best option is to detect it when it does! Left and right exception joins are great tools for trapping invalid data. In the previous examples, invalid data existed in both files. To determine which records in the Order File have invalid customer numbers, the following SQL statement is used:

In the example shown in Figure 5, customer number 104 is included in the result table because it does not exist in the Customer Master File.

Order numbers 3159 and 3366 are included in the result table (shown in Figure 6), because they do not exist in the Order Detail File. 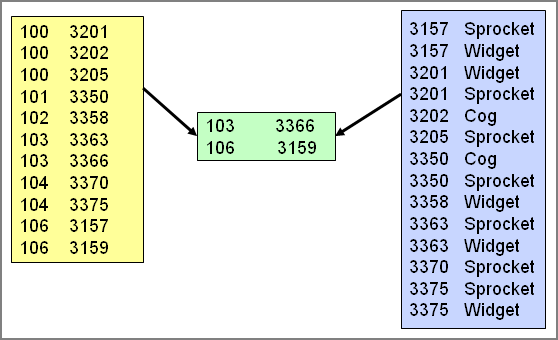 The most unusual kind of join (and the hardest to find a good use for) is the cross join, also called a Cartesian join. The cross join connects every record from the left-hand file to every record on the right-hand file. The result table created by this SQL statement can be huge. Typically, some sort of selection criteria is applied to the result table to minimize the number of records selected. So the question is, how do we use a cross join in the real world? Consider this example: We want to create a list of all our customers, and for each customer, we want to include a list of all items that are available for a special offer:

In this case, all customers are selected and each item marked with an "X" in its special offer code column is included for each customer. Figure 7 shows an illustration of this technique. 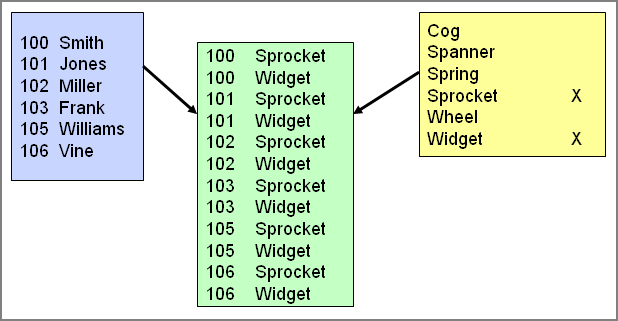 It may not be a technique you're likely to use every day, but you may stumble across situations where it comes in handy.

The joins discussed might be described as horizontal joins, meaning that columns from different tables are merged together within the same record. A different technique creates a vertical join, or union. A union merges together rows of data from different files. Very different from the previous joins, however, the union must select the exact same number of columns from each table. And the data type for each column selected must match the data type in the other selected column. This kind of SQL statement is most useful when merging data from files that contain similar data. For example, a database might contain a Salaried Employee file and an Hourly Employee file. To create one list of employees, the following union can be used:

All the employee names from both files are included in the result set, shown in Figure 8.

The UNION keyword merges the two SELECT statements together, and the ALL keyword indicates that duplicate records in the result set are allowed. Without the ALL keyword, the duplicates are eliminated.

Notice that the union created above is not in any particular sorted order; it is presented however the SQL engine threw it together. At the end of all UNION statements, an ORDER BY clause can be added to specify the sort order of the result table. The difficulty here is that the ORDER BY clause normally contains column names such as this:

This will not work with unions, because the column names may not be consistent between the SELECT statements being merged together. Do not give up hope, though. It is still possible to sort the data. Simply use the ordinal number of the column or columns to sort by. Ordinal numbers represent the sequence number of the columns in the SELECT statements. Ordinal number 1 is the first column, 2 is the second column, and so on. So, to sort the previous union by employee name, use this statement:

The result set created by this SQL statement is shown in Figure 9. It merges the data from both SELECTs together, sorted by the second column. 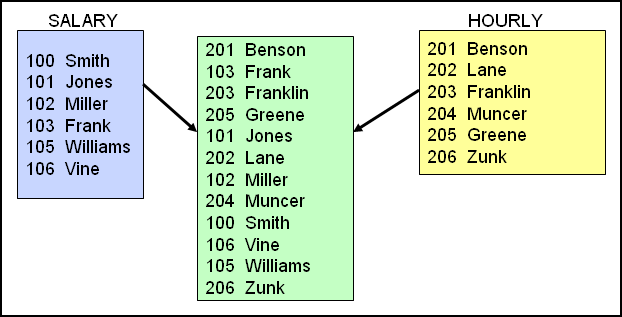 Each SELECT statement must provide the same number of columns and the same basic data type for each column. The exact data type or length is not an issue: For example, a quantity column could be packed decimal in one file and zoned decimal in another. The SQL engine handles that situation with no trouble. But what happens if one of the files has a column called YEAR that stores the date as a two-digit numeric field, and the other file being merged by the union has YEAR stored as a two-byte character field? Some sort of conversion must be performed to allow the union to execute:

As illustrated in Figure 10, the DIGITS function in this example converts the numeric field HYEAR to a two-byte character field.

The CHAR function would have worked as well, but it would have dropped leading zeros and left-justified the value. That doesn't work well with year numbers. The DIGITS function performs a more disciplined translation to text by simply converting each digit and performing no other editing.

Figure 11 displays the results of this union.

The DEC function used in this example converts the character data in HIREYEAR to a two-digit numeric field. The CAST function would have worked as well, but it is quicker to type the DEC function, so I use that instead! DEC also has optional parameters for specifying the number of digits and decimal places:

In the previous examples, we talked about using consistent data types for each column, but what if one of the files involved simply doesn't have a particular column in any form? A missing column can be handled by providing a place holder in one SELECT. For example, if the SALARIED file contains a column called PERDAYS for personal days, the HOURLY file may not contain a similar column if hourly employees do not receive personal days. To include that column from the SALARIED file, the HOURLY file must hard-code a value to correspond to the PERDAYS field, and its data type must match:

This example creates a consistent set of columns in both SELECT statements by hard-coding the necessary values. The results of this statement are illustrated in Figure 12. 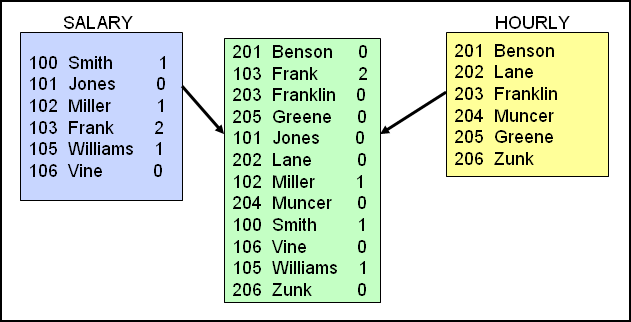 The 0 specified for the second column from HOURLY forces a zero value into that column for every record selected from the HOURLY file. If the column without a corresponding match is a character field, use a blank within quotes to signify the default value.