Call SQL procedures from the RPG green-screen easily and retrieve the returned result sets if you are on V5R4 or later.

The command Call SQL Procedure (CALLSQLPRC or CALLP) allows us to call an SQL or external procedure and optionally retrieve some or all of the result sets returned by the procedure. It can be downloaded from the following links: English, Spanish.

The command CALLSQLPRC performs the calls to SQL­ procedures and the retrieval of the returned result sets by using the APIs of the SQL Client Level Interface (CLI), known in other environments as the ODBC interface. These APIs—available for any ILE language—allow us to open a connection with a relational database and run dynamic SQL statements.

Documentation of these APIs and their use can be found in the IBM Knowledge Center at "Database/Reference/SQL call level interface" and in the IBM i handbook Database: SQL Call Level Interface.

Opening a Connection with a Relational Database

The command CALLSQLPRC has no parameters. It shows a screen requesting the relational database we want to connect to, and the name and library of the procedure to be called, as shown in Figure 1: 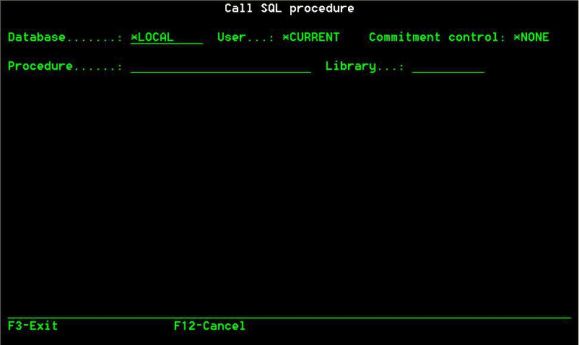 Field Database can contain any local or remote database that is defined on the system—that is, shown by the command WRKRDBDIRE (Work with Relational Database Directory Entries). The value *LOCAL identifies the system database on the local system.

The only user (and password) allowed for the connection with any relational database is the user of the current interactive job (value *CURRENT for field User).

After selecting one of the specific procedures (with S, X, or 1), the procedure parameters are shown.

The screen with the procedure parameters is shown in Figure 3: 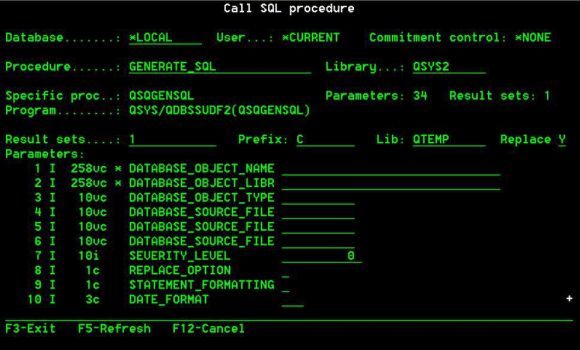 The data shown for each parameter are its number, mode (I, O, or I/O), length, type, and name.

The parameter types supported are the following:

Character and binary parameters can have any length, but the maximum number of characters shown in the display is 30.

Numeric parameters can be up to 30 digits long, but the maximum number of digits shown in the display is 11.

Parameters that are shown in the display with a shorter length will be preceded by an asterisk (*).

If the value returned by a procedure in a numeric parameter has over 11 significant digits, it will be truncated to be shown in the display, and one of the literals truncI, truncD, or truncID will indicate the part truncated (integer and/or decimal).

In addition to the parameters, the screen of Figure 3 shows a line that allows us to specify the returned result sets to be retrieved.

In field Result sets, type the positions of these result sets according to the order in which they are returned by the procedure. For example, 1 3 would indicate that you want to retrieve the first and third result sets returned. This field can be blank.

Field Prefix should contain the prefix of the files where the result sets are going to be stored. The file names consist of this prefix and the position of the result set—for example, C1, C2, etc.

In a previous article ("Format of Records Saved to a Save File, Part 2"), I included the command GETDLTRCD (Get Deleted Records) for version V5R4. This command allowed, in certain cases, to retrieve variable-length fields from deleted records.

Anyway, this command can still be used to retrieve fixed-length fields from deleted records, even when the file contains variable-length, nullable or date-time fields.

You can download this command for versions 7.1 and 7.3 in English and Spanish.