Cascading Style Sheets (CSS) provide a flexible way to control the look or presentation of your Web pages. Small changes to a single CSS style sheet can dramatically change the appearance of many Web pages.

Editor’s note: This article is excerpted from chapter 3 of Developing Business Applications for the Web: With HTML, CSS, JSP, PHP, ASP.NET, and JavaScript, by Laura Ubelhor and Christian Hur.

This easy method for controlling the design of your pages allows you to rapidly implement changes to the look and feel of your website. The CSS elements are often called style rules and can be inserted directly in a Web page or separately in an external file.

There are three different methods by which CSS styles can inserted in a Web page: inline style, embedded or internal style, and external style. There is a fourth method that uses the @import directive to import an external style sheet into another style sheet, similarly to how the include statement is used in PHP. Although we will not discuss this method in detail, we’ll show an example of using it later in this chapter. Each method has its own advantages and disadvantages. However, the rule of precedence is an important concept, and CSS rules must be coded in a logical order, as CSS styles will cascade down from one style sheet to another. In this chapter, we will discuss and learn some of the most common CSS styles and how they can be inserted into a Web page using the three different methods.

In a nutshell, CSS is a simple language that defines style constructs to format the appearance of a Web page. The style rules define a set of formatting instructions (one or more property-value pairs) that affect the HTML elements in a Web page. CSS is a presentational language, in contrast with HTML, which is a semantic language. CSS is a presentational language because it configures, formats,

and styles the HTML elements to give the Web page its visual appearance. HTML, in contrast, is a semantic language, which means that an element describes its meaning associated with the content to a user agent such as a Web browser, a screen reader, or a Web crawler. In other words, you will not find a loop statement or a function in CSS. It is the perfect complement language to HTML and was designed primarily to work with HTML.

The CSS style rules and standards are set and maintained by the World Wide Web Consortium (W3C), which introduced the first version (or level) of CSS, CSS1, in 1996 followed by CSS2 in 1998 and CSS3 in 2005. Each newer level of CSS is built over the previous level. At the time this was written, CSS Level 3 (CSS3) was still the most up-to-date version used in today’s Web development. Even though CSS3 was released more than a decade ago, many new properties and rules have been gradually introduced. This chapter covers many of the standard CSS properties and rules and some of the new CSS3 properties.

A CSS style rule contains two parts: selector and declaration. A selector can be any HTML tag (such as p, h1, or div) or a user-defined selector such as a class or an id. We will discuss class and id selectors later in this chapter. The declaration is a list of property-value pairs that are associated with the selector. A property is any construct such as font-size, color, or position with values like 12px, red, or relative, respectively.

Figure 3.1 shows the syntax for defining a CSS rule.

A selector can have more than one property-value pair. Each pair must be separated by a semi-colon (;) and should start on a new line, as shown in Figure 3.2.

When defining the style for an element (such as a <p> tag), the element’s tag is listed without the angle brackets (< >) and followed by braces ({}). Within these braces, any available property can be defined. Each property is followed by a colon (:) and then by its associated value. Each value is followed by a semicolon (;). You may list additional properties as needed. The ending brace is coded after all the listed properties. The example in Figure 3.3 defines style rules for the paragraph (p) and heading (h1) selectors.

Figure 3.3: CSS style rules for the p and h1 selectors

If you want the h1 selector from the previous example to have a different font-style (such as italics) but want to retain the same rules, then you can define h1 again as a separate selector and apply just the font-style, as shown in Figure 3.5.

A question you might have is “How does the Web browser know which selector to use?” What’s really happening behind the scenes is that the Web browser collects all the CSS style rules created for each selector and regenerates a new complete virtual set of rules for that selector. The resulting style sheet is a virtual style sheet that contains all the selectors and their associated declarations, as shown Figure 3.6. 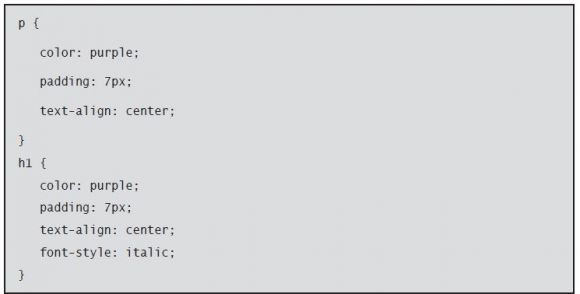 Figure 3.6: A virtual style sheet rendered by the Web browser from the CSS in Figure 3.5

Next time: Applying Style Sheets to Web Pages. Can't wait?  Get your copy of Developing Business Applications for the Web: With HTML, CSS, JSP, PHP, ASP.NET, and JavaScript at the MC Press Bookstore today!

Laura Ubelhor owns and operates Consultech Services, Inc., a Rochester, Michigan-based technology consulting company. She has written many technology articles and is co-author of Developing Business Applications for the Web and HTML for the Business Developer. Laura also helped write the COMMON certification RPG and Business Computing Professional exams. She has been involved in the Southeast Michigan iSeries User group since 1988 and has served as group president for over 15 years, as well as lead organizer for the group’s annual MITEC conference. Laura is also a longtime volunteer for COMMON, the IBM i and Power Systems user group, and has spent much of her career advocating for IT professional education.