PHP is a flexible, portable Web-programming language that began as someone's personal project. It has come far. As of April 2006, over 20 million public domains (to say nothing of intranets and other private sites) were using PHP. IBM and Oracle endorse it. Where does PHP fit in a professional IT organization?

Carlos Recalde, Managing Director of New York City–based Successful Technology, LLC, helps corporate executives align business strategy with technical direction: "coordinating the CEO's vision with the CIO's vision," he says. Recalde also volunteers his talents for nonprofit groups, where PHP is often recommended for its flexibility and its support of many environments and platforms. Programmers of varied backgrounds can usually understand and modify PHP applications. Recalde emphasizes that downloadable, fully functional, PHP-based open-source applications can address the needs of nonprofits quickly and inexpensively.

PHP has always been primarily a Web programming language with goals of simplicity and clear syntax. Rasmus Lerdorf created the first version of PHP in 1995 to help him track online hits to his résumé. At first, PHP stood for Personal Home Page (Tools). In 1997, Israeli university students Andi Gutmans and Zeev Suraski (who together later formed Zend) began to make PHP a structurally sound language for future growth. PHP continues to evolve at a rapid pace. An Introduction to PHP, excerpted from Core PHP Programming, Third Edition (2003), by Leon Atkinson and Zeev Suraski, provides a lively, detailed history.

PHP, which has an open-source license, is not owned by any commercial entity. Hundreds of programmers worldwide, working either pro bono or for their employers, contribute improvements and bug fixes. Yahoo! engineer Andrei Zmievski has been enhancing PHP's internationalization support, especially Unicode, on Yahoo!'s behalf. The improvements will appear in PHP Version 6 (release date unannounced), providing a stronger language for both Yahoo! and the broader PHP community. (Zmievski is scheduled to discuss PHP 6 and Unicode on June 16, 2006, at the New York PHP Conference.) The widely dispersed development efforts are coordinated by Zend. (Aron Trauring's "Free and Open Source Software: A Field Guide" provides a thorough explanation of the open-source movement and its business model.)

PHP programs are typically stored in text files with the extension .php. As part of PHP's Web heritage, commands are often combined with HTML, especially in simple programs. The following example, try.php, was created with a text editor. (I used EditPad Pro, but Windows Notepad is also fine.) Programs written in PHP are interpreted, not statically compiled. As a result, the output appears as soon as the browser window is refreshed.

The simple output of try.php is shown in Figure 1.

The example above shows how PHP tags can commingle with HTML in simple programs. More sophisticated programs use a template engine or framework to separate HTML from programming logic.

Although PHP supports many relational database management systems, the database most closely associated with PHP is MySql. MySql is supported by most hosting services that support PHP. Even though a commercial entity, MySQL AB, owns the source code, MySql is free open-source software. For a fee, MySql AB provides support and enterprise-ready, scaled-up versions of the database.

Besides MySql, PHP supports most popular databases, including Oracle, IBM DB2, and Microsoft SQL Server. Some database vendors, such as Oracle and IBM, contribute code to help PHP work with their products efficiently.

Sample code below reads DB2 data from an IBM System i server. Note the and ?> tags that start and end a block of PHP code. The rest is HTML.


The HTML result is shown in Figure 2. 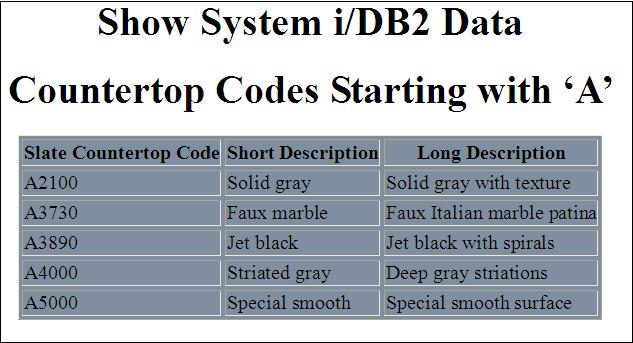 Carlos Recalde of Successful Technology notes the large number of downloadable software packages built with PHP that are available for free or at low cost. Collaborative and content-management software in particular is plentiful and varied. Popular, high-quality packages, all free, include these:

* A wiki is a collaborative Web site that can be edited using a Web browser.

Open-source packages such as those listed above offer many advantages:

Randall Rode, IT Director at the Yale School of Drama/Yale Repertory Theatre, discovered PHP in 2004, he explained in a telephone interview. Intrigued by the ability of blogging software to manage Web content, Rode started his own blog, RodeWorks. He created his blog with free PHP-based software from WordPress that he installed on a low-cost Web host.

Rode, who considers himself not so much a programmer as "a generalist who solves problems with IT," studied the WordPress software and modified its PHP code to his liking. Finding PHP easy to use, he wanted to learn more. At a two-day "PHP for Designers" course in New York City, Rode saw that the language could help with projects at Yale.

The dean at the drama school had requested two Web-based applications: a subscription-purchase system for the Yale theater's public (deadline: September 2005) and a course-evaluation system for students (deadline: late fall 2005). Rode's deadlines and tight budget limited his access to outside help.

Rode wondered whether he could use PHP and a MySql database to handle such projects himself. He created prototype applications on his hosted server that showed he could. He then tackled the full systems.. Working through summer 2005, he reached his goal, finishing in time for the new season. The theater started to sell subscriptions online in September 2005 (http://yalerep.com/buy_subs.html). Students evaluated their courses online by semester’s end. Rode's hard work paid off.

PHP in the Enterprise

Despite PHP's popularity, it has not displaced the traditional enterprise and large-scale frameworks such as Microsoft .NET and Java's J2EE.

Can PHP support the weight of a complex enterprise architecture?

Although PHP is great for "islands"—small departments or specific, individual needs—it's not designed to produce a well-integrated enterprise architecture, according to Recalde. For example, an attempt to use PHP to distribute a load-balanced application dynamically over 12 data centers across the globe, while possible, would have to be "cobbled together," requiring extra layers of resources and management effort. Although .NET and J2EE are more complex than PHP, Recalde points out, their complexity allows them to fit more efficiently into a global enterprise architecture.

(The Professional PHP blog assesses PHP's strengths and weaknesses for enterprise use.)

Some are working to make PHP more attractive to the enterprise market. Zend has created a package called Zend Platform to make PHP applications "enterprise grade."

J2EE and PHP sometimes work together. A flexible PHP front-end layer can communicate with a J2EE back-end system. One rationale for introducing PHP into a J2EE system, besides PHP's productivity for Web programming, is that many industry participants believe PHP developers charge less, on average, than Java developers of equal skill.

Another way to join PHP with Java comes from the Zend Platform PHP/Java Integration Bridge.

According to the Zend PHP/Java Integration Bridge Web page, the Bridge "is based on a unique design that allows for a single Java Virtual Machine (JVM) instantiation and direct calls from PHP. [It] allows companies who have investments in J2EE application servers to take advantage of PHP, the high-productivity language for Web application development. In addition, the Integration Bridge allows companies using PHP to take advantage of J2EE services that are not present in PHP. The Zend Platform PHP/Java Integration Bridge provides the ability for PHP developers to create applications that interact with any Java object."

Commercial entities are advocating open-source technology. In a move comparable to IBM's groundbreaking adoption of Linux several years ago, IBM has been devoting resources and publicity to PHP. Here's a rough timeline:

The IT community monitors the strategy of IBM and other big players. The significance of IBM's interest in open-source technology was stressed by a longtime industry observer, Aron Trauring. In May 2005, Trauring, CEO of Zoteca, told the New York Software Industry Association's Open Source group, which he chairs, "IBM is the IT industry." (Trauring wrote the paper on open-source software cited earlier in this article.)

It's easy to try PHP on a server or personal computer. Download XAMPP, a free package that includes PHP, MySql, and the Apache Web server. Scroll down the distribution list till you see the version appropriate for your operating system.

If your IT environment does not support PHP directly or cannot spare a server, Randall Rode's method may work for you. Run a pilot project using an inexpensive (often less than $10/month) hosted server that supports PHP. Upload your PHP files to the server via FTP or other file-upload facility. Type the appropriate URL into a browser address bar. You are now running PHP.

• IBM System i and Zend PHP

Alan Seiden is a consultant and developer at a northern New Jersey IT firm, where he enjoys helping clients to meet business goals through the creative use of technology. Alan is vice president of the New York City Usability Professionals Association. Email Alan at This email address is being protected from spambots. You need JavaScript enabled to view it..