A Web server is a set of programs that responds to requests coming from another program—a Web browser such as Netscape Navigator or Microsoft Internet Explorer. Having thrown its hat into the Web server ring, the AS/400 Web server development team has made steady strides in bringing the AS/400 into a respectable position. The AS/400’s Web server features include the following: an HTTP server that provides Web page content for Web browser users; a Workstation Gateway (WSG) server that delivers AS/400 5250 data stream content; and a server-side program execution gateway that calls a program on the server to interact with a Web browser user.

An HTTP server program transmits data representing an HTML document to a requesting host computer. The receiving computer reads the transmitted data into a Web browser. The Web browser is capable of interpreting the data into a display consisting of lines of text, artwork, sounds, and so on. For some applications, there must also be support for programs running on the server that collect data provided by the user (CGI programs, for example). As seen in Figure 1, the client/server structure upon which HTTP is built places part of the mechanism on the client and part on the server. The browser program resides on the client and acts as a general-purpose instruction interpreter. HTML data contains instructions that tell the client’s browser how to behave, plus textual and multimedia content.

An HTTP server, such as Apache for UNIX operating systems or the one that comes with OS/400, is a complex application capable of a variety of tasks. A server is designed to be

flexible in its operations, and the price of this flexibility is complexity in the program’s configuration.

HTTP configuration information has five setting levels. Figure 2 shows the levels of configuration for HTTP and the associated methods—either a CL command or an HTTP administration form—you use to set values. As you might suspect, you can configure the AS/400’s HTTP server in two ways. Using Operations Navigator (OpsNav), however, is not one of them. You can perform most HTTP configuration tasks from an AS/400 5250 session by using CL commands such as Change HTTP Attributes (CHGHTTPA) and Work with HTTP Configuration (WRKHTTPCFG), which runs a special HTTP configuration editor in a green-screen session.

The HTTP server Configuration and Administration utility groups related pieces of configuration details into a series of forms that makes the task easier. The IBM utility is a Java applet that runs on your Java-enabled Web browser. The applet is a program that interacts with the user to present and accept HTTP configuration information for the AS/400. As seen in Figure 3, the configuration applet has, on the left-side menu, a series of categories that are opened to allow access to the specifics. The specifics are presented in forms on the right-side panel.

• Global server parameters apply to all instances of the HTTP server.

• Access control lists define access authority at the file level within a directory. A request for file access is evaluated by file name, request method, and user name.

The HTTP administration server runs over port 2001 and is not normally started automatically. You can start the HTTP configuration and administration server from a 5250 command line with CL command STRTCPSVR SERVER(*HTTP) HTTPSVR(*ADMIN) or with OpsNav. Allow the server time to start (you can check with WRKACTJOB for the status) and then access the utility from a PC Web browser.

To start the HTTP configuration applet (*IOSYSCFG system authority is required), start your Web browser. In the location/address box, specify the URL http://Your.AS400Host.AndDomain:2001/. If all is well, a welcome page will appear. Clicking on IBM HTTP Server for AS/400 starts the Configuration and Administration utility seen in Figure 3. (If you click on Related task information from this display, you bring up the IBM AS/400 Information Web page over the Internet at www.as400.ibm.com/anchor/MRI2924/anchhome.htm. This page gives you easy access to the HTTP server documentation as well as other related IBM manuals.)

Traditionally, Web service functions take place under utilities (such as Apache) that run on a UNIX operating system. To make the AS/400 more appealing to the traditional UNIX market, the AS/400 Web server developers extended an effort to make its interface more UNIX-like. Configuring a server is done via special instruction statements called directives.

Directives to the AS/400 HTTP server program are plain-text statements that the system administrator maintains.

You can maintain multiple sets of directive statements, each corresponding to an instance of the HTTP server. Each set is stored in its own member. When shipped, the AS/400 is preconfigured with a default set of directives residing in the member named CONFIG. The directive statements contained in the CONFIG member are mostly comments as designated by the number sign (#). The comments provide information about directives and are worth reading.

With a rudimentary IBM-supplied editor (somewhat similar to SEU), you can also edit a set of directive statements from an AS/400 5250 session. You invoke the editor with the CL command WRKHTTPCFG. The default configuration member is brought up for editing with WRKHTTPCFG CFG(CONFIG).

You usually edit directive statements with the less direct but more meaningful access that the HTTP Configuration and Administration utility provides.

Directive statements are grouped by the following categories:

• General directives apply to a particular instance of the server as a whole.

• File name suffix directives bind incoming requests for a file with a particular extension to MIME content types or subtypes.

• Directory list directives control how the contents of a specified directory are made available to the requester.

• Welcome directives map requests without an explicit page reference to a default, or welcome, page (index.html, for example).

• Accessory program directives determine which CGI program to call when an incoming request for program execution cannot be mapped to a program.

• Timeout condition directives establish a timeout value for requests from the browser, the server, or an executing program.

Only a few directive statements are required for basic HTTP configuration. Enable and Disable are general directives that enable or disable a connection request. Pass is a mapping

directive that redirects incoming URL requests to actual system directories or libraries. Exec is a mapping directive that indicates that the server may execute a CGI program and specifies where the program may be found.

The Enable and Disable Directive Statements

The Enable and Disable statements instruct the server program to accept or reject a specified type of connection request. The basic types of connection method requests are as follows:

• GET requests a retrieval of Web page content or output from an executable program.

• HEAD requests a connection. (The HEAD method causes the server to return an HTTP document header without the document body. Generally, you use this method for testing.)

• POST indicates that the input to the CGI program will be passed in a standard input stream format, which is required for some types of HTML form processing.

• OPTIONS allows a client to determine the options and requirements associated with an object or determine the capabilities of a server without having to retrieve the object.

• TRACE causes the server to echo the request message sent by the client. (This method is used for testing.)

The default settings enable the GET, HEAD, OPTIONS, and TRACE methods and disable the POST method. (If you are going to allow form processing, you must specify the Enable POST directive.)

The Pass directive replaces a matched string coming from a browser within a URL request with a replacement string. The string that is to be matched and replaced is called the template. Pass is the directive statement used to map an incoming request for page content to the actual directory and file name. You may have multiple Pass directives; when a template match is found, the search is ended. The format of the Pass directive is as follows:

In this format, request-template is the incoming string that is to be matched, file- path (optional) is the directory and file name (an asterisk (*) indicates that file names will be passed as they are), and IP-address (optional) is the server address that the client connected to.

As I mentioned, your AS/400 is preconfigured with several Pass directives entered in the default configuration member CONFIG. (Do not make any changes to the ADMIN configuration member. There are no directive statements anyway because all parameters are correct as defaults.)

Figure 4 shows these two preconfigured Pass directives (highlighted). The first Pass directive instructs the HTTP server to route URL requests that do not include a specific file request (for example, www.myas400.com) to the AS/400 Integrated File System (AS/400 IFS) directory/QIBM/ProdData/ HTTP/Public/TC1/ICSS/ HTML/. And in that directory, you will find the HTML document Welcome.html, which is to be served by default. (Welcome.html is an IBM-supplied page that is provided as a sample.)

The other highlighted Pass directive redirects all requests to the directory /sample/* to the real directory /QIBM/ProdData/HTTP/Public/TC1/ICSS/ HTML/*. The asterisk (*) is a wild card character meaning “any file.” With these directives in place, a browser user could reference the URL http://s101901r.evergreen.com/ with no further identification of a

desired document, and the HTTP server would deliver the file Welcome.html. References within Welcome.html to resources (such as artwork files) in the directory /sample/ are likewise mapped to the real directory. You might consider replacing these preinstalled Pass statements (comment them out) with your own to point to your welcome page (usually named index.html) so your users will access your page, rather than IBM’s, when none is specified.

The directive Pass /www/* /webpage/* converts requests to www (the directory published to the world) to a real directory named webpage. The actual directory name is hidden from the browser user, thereby enhancing security. However, here is an important note: Specifying Pass /* (with no replacement string after it) is a serious security exposure. Specifying Pass /* disables any further access control that the server would impose. Using this directory, though, does not override any object-level security that you have in place.

The Exec directive indicates that the server may execute a CGI program and specifies where the program may be found. (All AS/400 CGI programs must reside in a regular library such as QGPL.LIB.) After a match to the template string is found, the request string is not compared with any other templates.

The format of the Exec directive is as follows:

Here, template is the request string that you want your server to accept and respond to by executing a CGI program; program-path is the name of the AS/400 library (in QSYS.LIB format) where the CGI programs are located; IP-address (optional) is the IP address of the HTTP server to which the client is connected (when HTTP servers represent themselves with more than one address); and CGI-conversion-code specifies the conversion coded character set IDs (CCSIDs) that are to be used (None is the default).

The AS/400 Web server gives your users access to current AS/400 data and allows you to collect data from the users with an ordinary PC browser—altogether, an applications solution with very compelling potential.

Figure 1: In a Web server/browser arrangement, the server program delivers text, artwork, multimedia, and applet content to a browser program for interpretation and display.

Figure 2: There are five setting levels for HTTP configuration information, and the values can be set using either a CL command or an HTTP administration form. 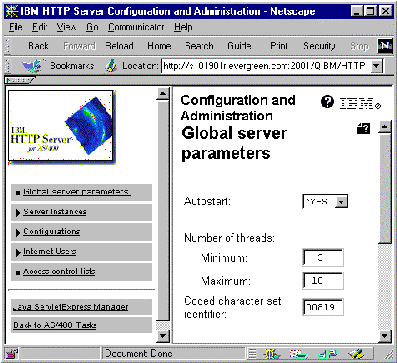 Figure 3: HTTP server configuration may be performed through the IBM- supplied HTTP Server Configuration and Administration applet in a Web browser. 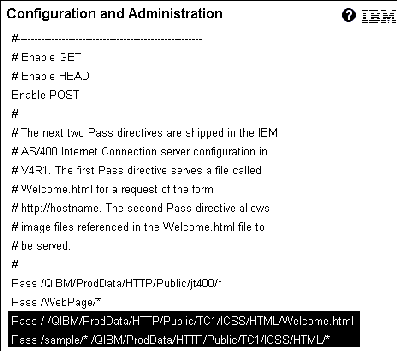