PHP, the popular cross-platform Web development tool, shows great versatility. It offers power to the pro and simplicity to the novice. It runs on many hardware and software platforms, including Windows, Mac, UNIX, and System i. PHP offers other benefits as well:

With DB2 support, powerful extensions and commands, and an architecture built for the web, PHP brings modern functionality to System i, simplifying tedious tasks. I recently worked with an HTML "textarea" (large text box) and had to split the text into chunks of a maximum size, observing word breaks. A mundane, time-consuming programming job? No—with PHP's wordwrap function, I needed only one line of code.

Programmers of All Levels

Even people without programming experience can use PHP. According to Michael Pinette, Zend's vice president of business development, an early Zend customer was a non-programmer psychiatrist who used PHP to provide online access to mental-health topics, reference material, and social-networking portals for specific disorders. While such newcomers can use PHP, the language has enough advanced features to satisfy experts who wish to write sophisticated object-oriented applications.

Zend's Added Value for System i

Zend is a great match for System i because it brings the priorities of the System i community—stability, trust, safety, easy administration—to PHP. For IBM, Zend provides reliable PHP distributions and value-added components. According to Andi Gutmans, Zend's co-founder and vice president of technology, the company performs rigorous testing on PHP, selecting the most stable, best-performing versions for release in Zend Core. The first generally available (GA) release of Zend Core will include version 5.1.4 of PHP, says Gutmans. Gutmans estimates a six-month lag between the appearance of an open-source version of PHP and its Core release, "so it's stable and bulletproof, and customers won't hit walls."

Gutmans says Zend intends to port all its products to System i, treating the platform's users as first-class citizens, with the full solutions that other platforms enjoy.

Zend users needing technical support can go to the Zend Support Center and obtain the first "support ticket"—continued help until a single problem is resolved—free. Subsequently, paid support is available at several levels, including 24x7 phone support. If a problem needs a collaborative resolution, Zend will work with IBM's engineers to solve it. In addition, free assistance may be requested at the Zend forums, with the usual delays and uncertainties inherent at volunteer help sites.

Zend Core requires i5/OS V5R4 or higher. Although IBM may eventually overcome technical hurdles to allow V5R3 support, this development is far from certain. System i users who want to try Zend in the near future would be wise to upgrade to V5R4, installing all relevant PTFs, especially the latest HTTP Server (Apache) PTF group.

Besides V5R4, users must install the following licensed programs:

How to Install Zend Core

After verifying the system requirements above, download Zend Core and Studio from Zend Network i5/OS page. Register as a Zend Network member to obtain access to Zend Core and Studio, discussion forums, support, and automatic software updates. When asked to select a "channel," click the link labeled "Zend Core," leading to a download page. From there, save the zip file to your hard drive. Extract the Zend Core files using an unzip tool such as ZipGenius. The extracted files include a save file, release notes, and a user guide.

For installation details, consult the release notes and user guide. Here are some additional tips (as of Version 1.3.1, the latest available at press time):

If any Web errors should occur, check for error messages in the following log files: /usr/local/Zend/apache2/logs/error_log .* or /usr/local/Zend/core/logs/php_error_log

Once you have installed Zend Core, the administration Web site will be available to you. The URL (by default) is http://www.myserver.com:8000/zendcore (myserver.com is any domain name assigned to your System i). Place your own PHP scripts in /www/zendcore/htdocs. They will run from http://www.myserver.com:89. Figures 1 and 2 show the Control Center and PHP Configuration pages. 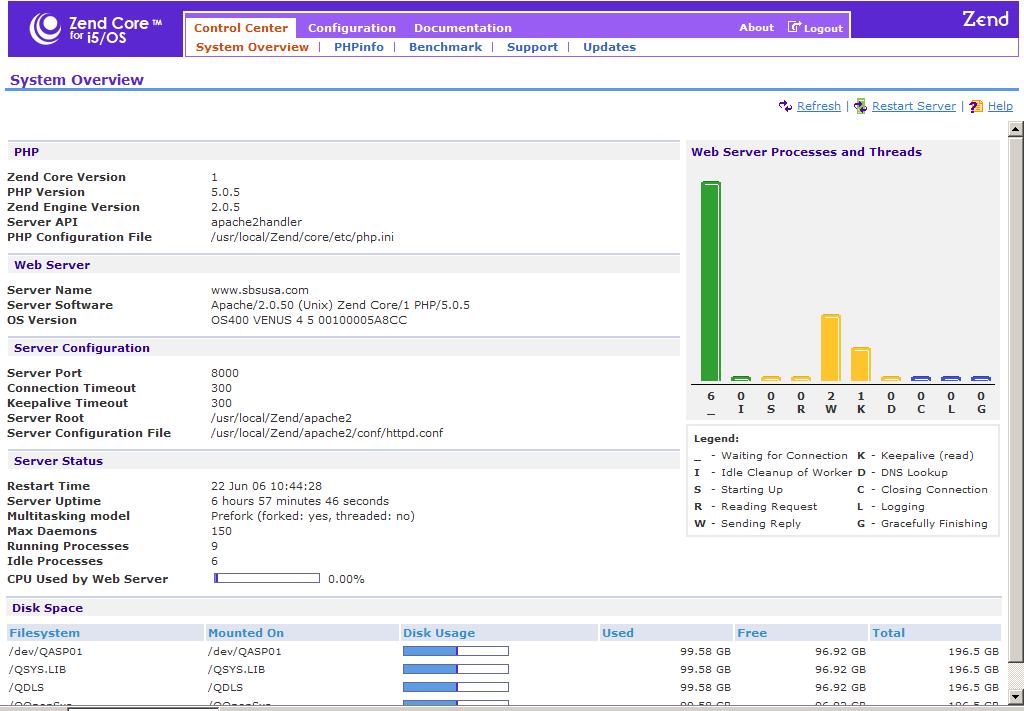 Figure 1: Zend Core for i5/OS Control Center shows the status of PHP and the Web server. (Click images to enlarge.) 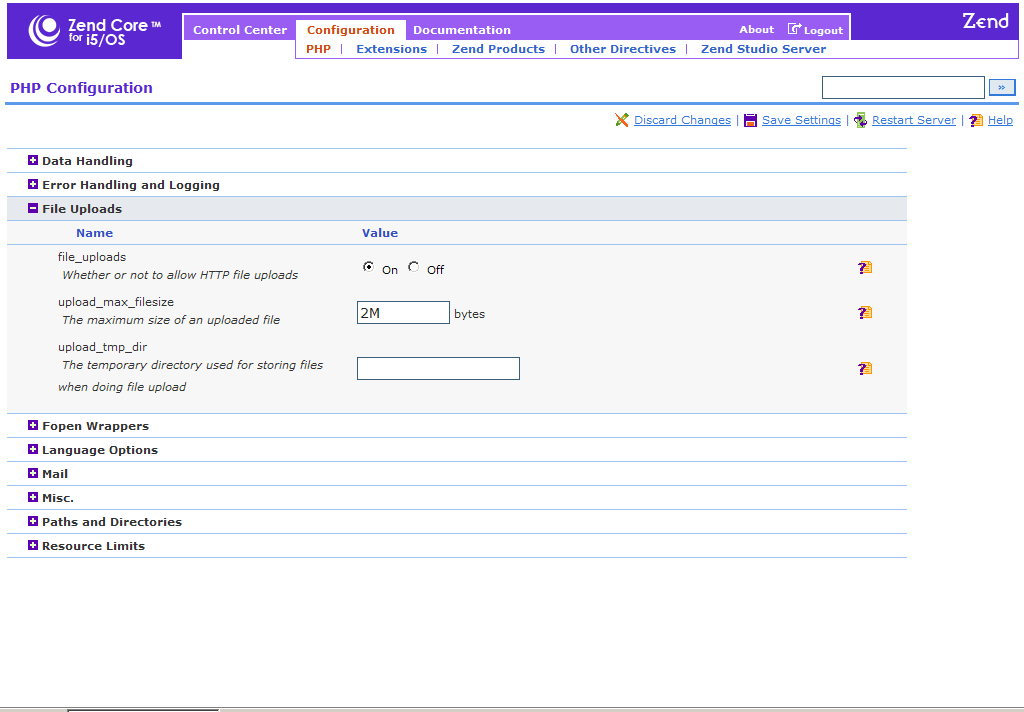 Download the appropriate version for you (Windows, Mac, or Linux) from the same page from which you downloaded Zend Core. The Windows version that I tried was a self-extracting executable file that installed easily.

Most of Zend Core's options are available on the Web-based administration interface. Some actions, though, can be run from a 5250 screen. 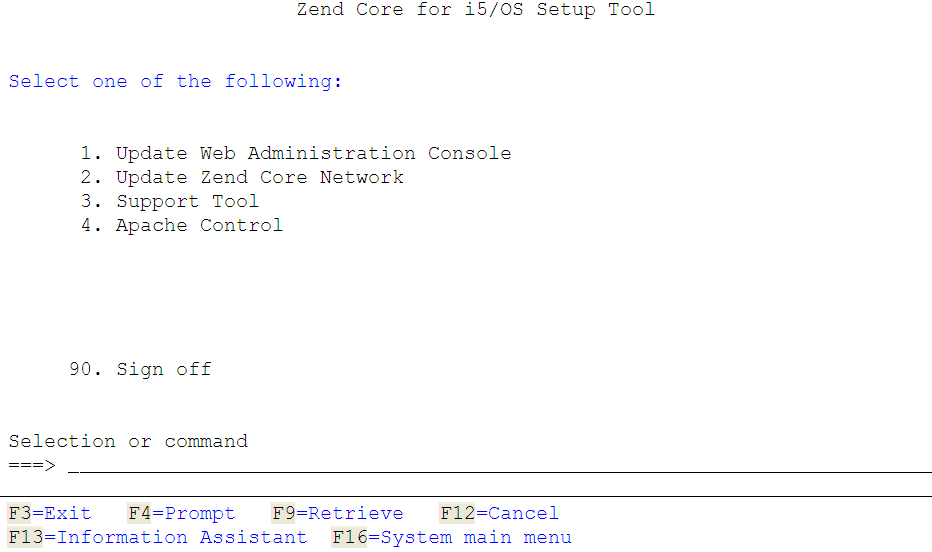 Figure 3: The Zend Core 5250-based setup tool offers access to the Apache menu and a few other selections.

For direct access to the Apache menu: GO ZENDCORE/ZCAMENU

Extensions contain targeted bits of functionality. When compiled into PHP, they act as seamless parts of the language. Although anyone may write an extension and compile it into PHP, Zend has selected the best for inclusion in Zend Core, Gutmans says. Gutmans and his colleagues have included the most widely used extensions that meet their standards of quality, including, for example, ibm_db2 for optimized db2 access and gd for creating graphics dynamically. 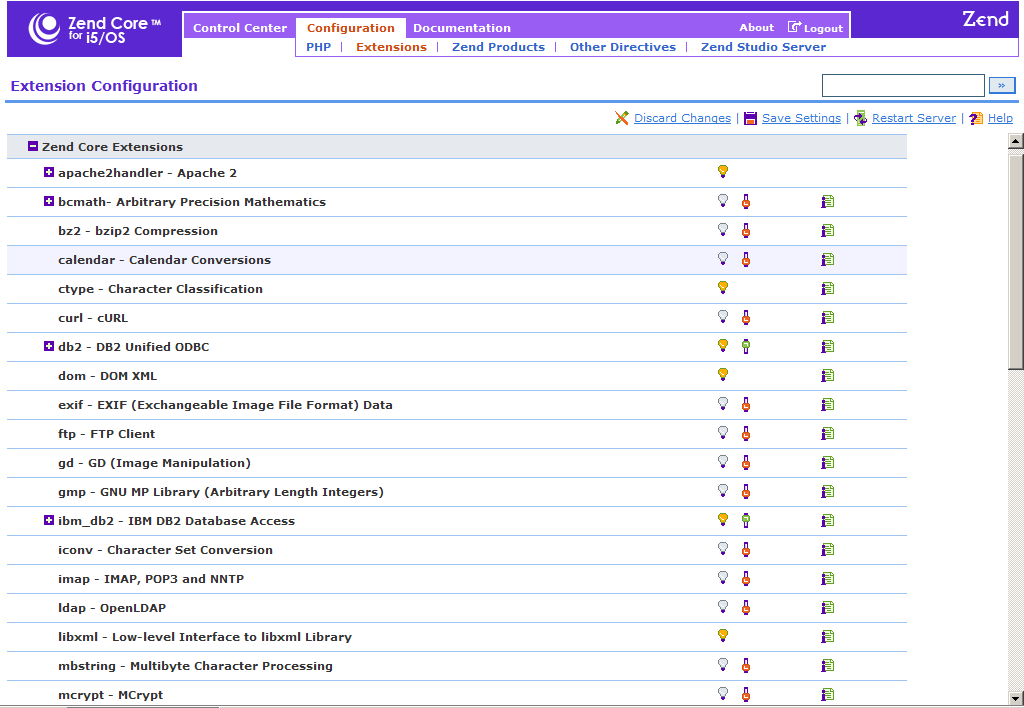 Figure 4: Extension Configuration allows extensions to be activated and configured.

The first GA release of Zend Core will not support PHP's mail() command. System i does not have the "sendmail" program that mail() requires. Applications needing to send or receive email must use an alternative, such as the free PHPMailer class. Newcomers can get started quickly with the PHPMailer Tutorial.

Generic, open-source distributions of PHP do not handle System i's special object types such as data areas, data queues, and message queues. Such distributions have no straightforward method to call i5/OS commands and programs written in RPG, CL, and COBOL. Zend Core is gradually filling this gap in the following ways:

Zend Core's PHP distribution has several extensions that enable users to connect to databases on System i and other platforms, as shown in the following table.

One easy way to get started with the ibm_db2 extension is to go to an example from Zend's "Developer Zone," copy it, and adapt it. The SOAP example later in this article also uses ibm_db2.

Zend Studio Is a Bonus That Speeds Development

Zend Studio Professional is a graphical development environment intended to speed development and improve code quality. System i customers are getting this excellent package free while others pay $240 list price.

Available for Windows, Mac, and UNIX clients, Studio is a dazzling productivity booster. Anyone still using a simple text editor is urged to try Studio.

Consider the following examples from the Zend Studio feature list. The 5.2.0 beta version was used.

Interactive debugger (Figure 5): Studio has a sophisticated debugger. While code runs, the debugger shows the function's output (text and HTML format), values of variables, the call stack, and more. 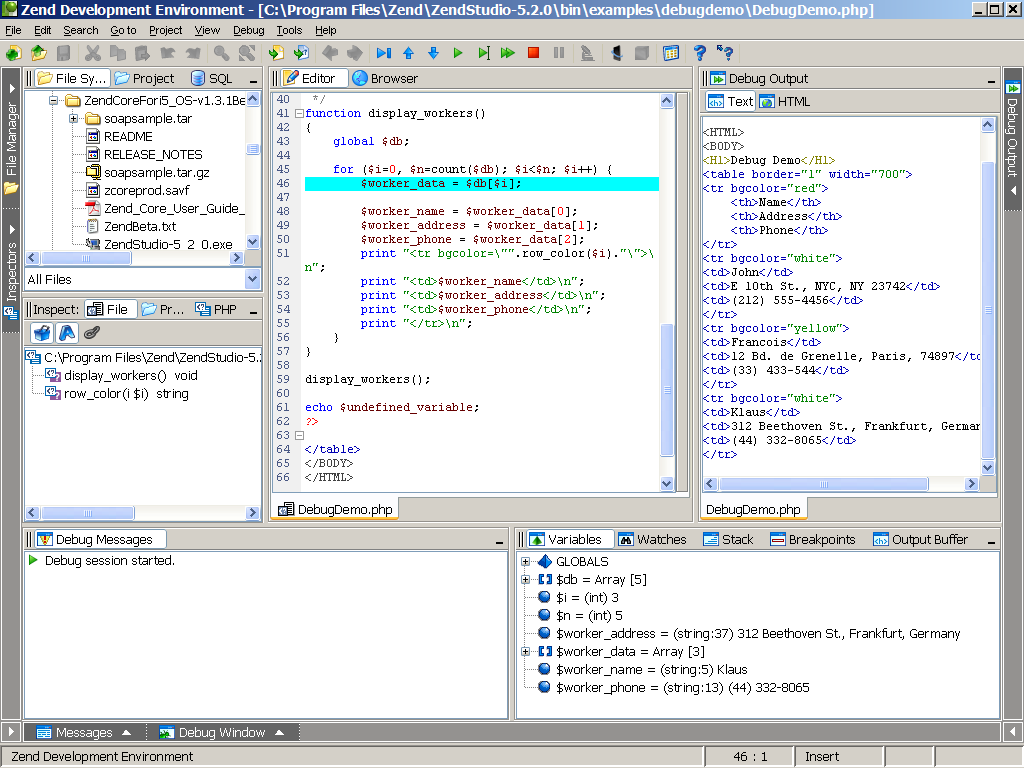 Figure 5: In the debug demo, the Debug Output pane shows the accumulation of HTML or text source as code runs.

Figure 6: The syntax checker noticed that a parenthesis was missing.

SQL Support can work with structures and data of many database types (Figure 8). 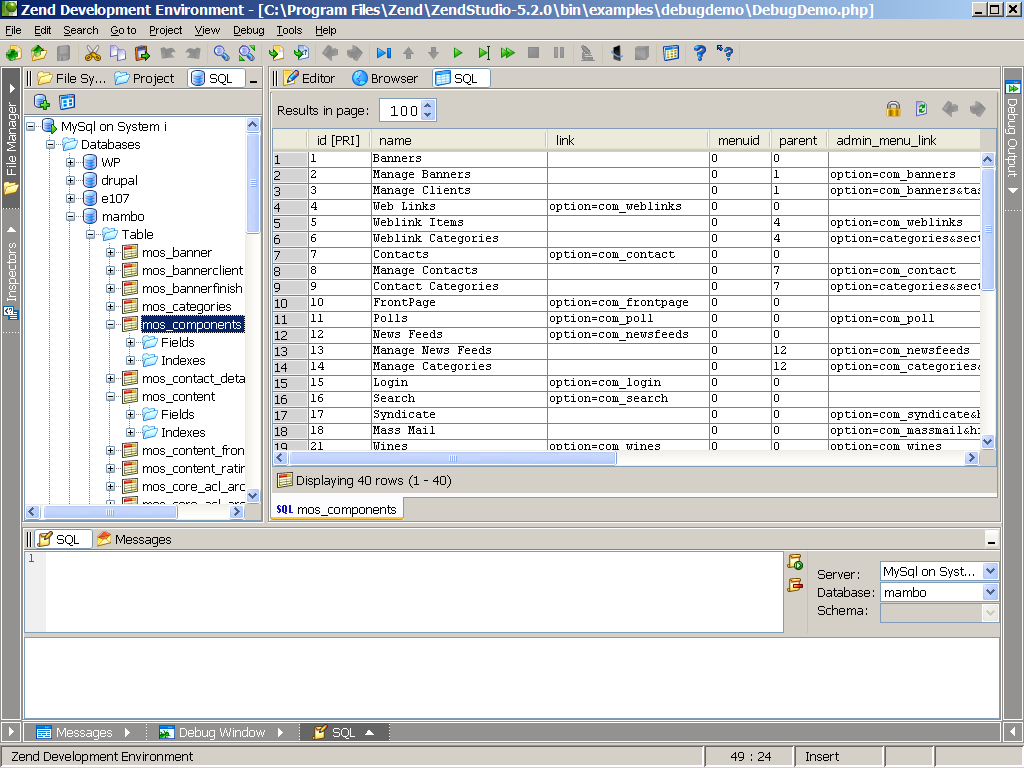 Zend Studio includes built-in clients for the popular Concurrent Versions System (CVS) and Subversion (SVN) version control systems. Administrators can download and install the open-source server portions from the Web. SVN, according to Gutmans, is superior to CVS and is adequate for teams of up to 10 developers.

Large teams might prefer a more robust version control system. Under discussion, Gutmans says, is the possibility that Zend will work with Eclipse and enterprise-grade version control such as IBM Rational ClearCase for more complex development environments.

Simple Object Access Protocol (SOAP) is an XML-based format that applications can use for exchanging data, primarily via HTTP. When two applications communicate, the data provider is called the "SOAP server." The data consumer is called the "SOAP client." How does the client know what services are offered by the server? A Web Services Description Language (WSDL) file defines the server's input and output. Zend Studio, with its ability to generate WSDL files, greatly speeds the preparation of SOAP services.

When I ran a quick personal test of PHP's SOAP extension and Zend Server's WSDL generator, everything worked easily. The example below, adapted from a sample by Zend's Shahar Evron, includes a server script (fruitserver.php) and a client script (fruitclient.php).

From STRSQL on a 5250 terminal, I created a table and gave it two records of test data:

The "at" signs (@) are part of phpDocumentor format, which helps generate WSDL markup. Note that fruitserver.php retrieves System i data using the ibm_db2 extension.

Figure 9: Fruitserver.php contains one class, one function, and a few SOAP commands.


Figure 10: Fruitclient.php uses a few SOAP commands (near the top) to get data from fruitserver.php.

Step 4: Run the WSDL Generator Wizard from the Tools menu, as shown in Figures 11 to 17. 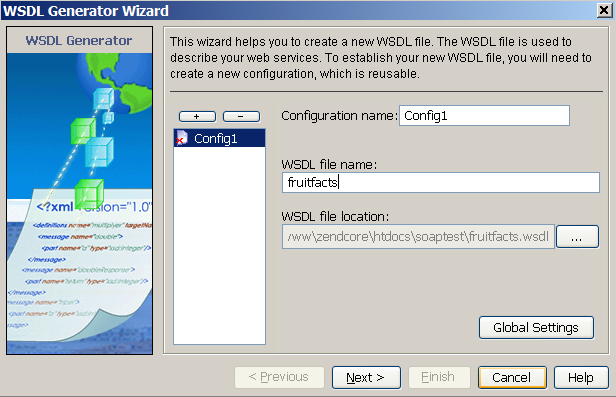 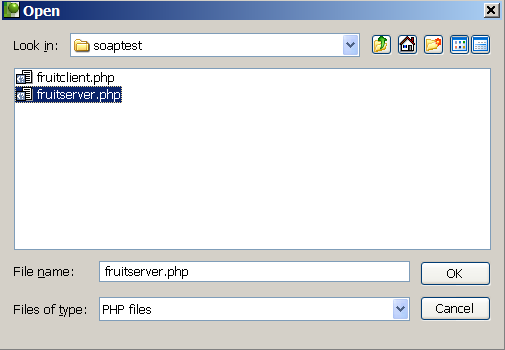 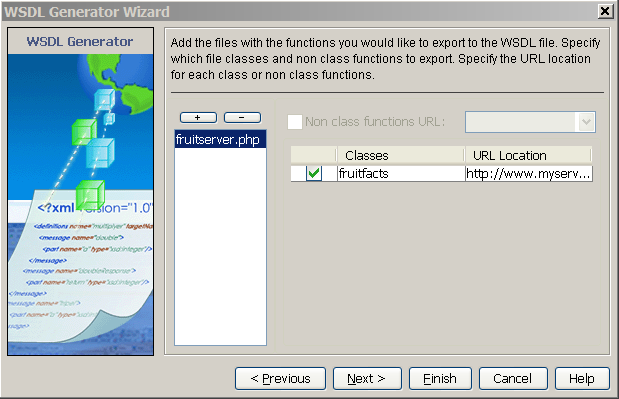 Figure 13: Point the Wizard to fruitserver.php, where our service function resides. 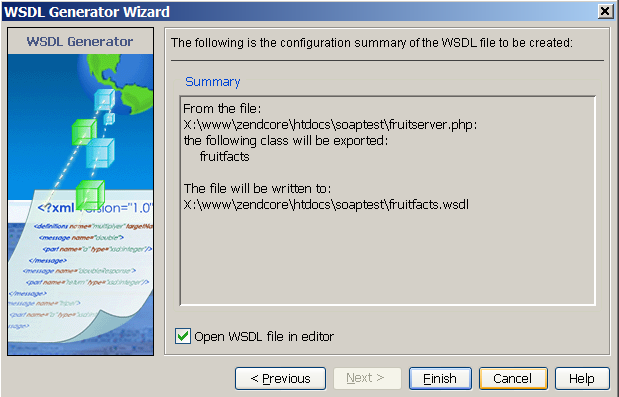 Figure 14: The WSDL generator reports its intention before creating the WSDL. 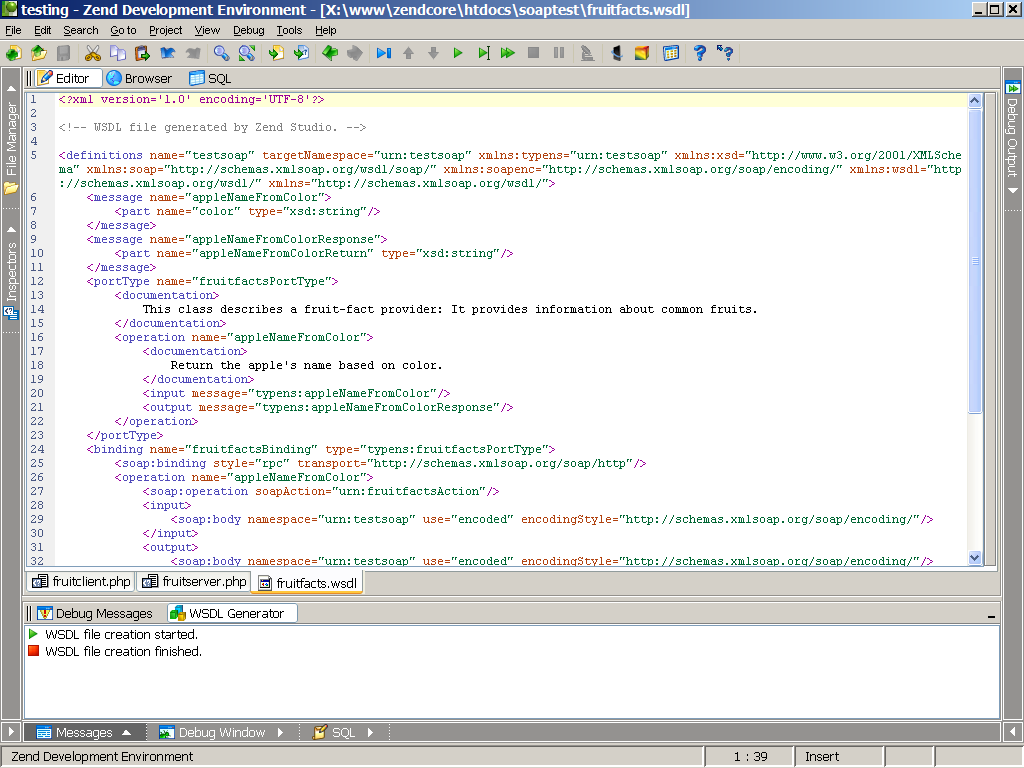 Figure 15: The WSDL file was created.

I was glad I didn't have to create fruitfacts.wsdl by hand (Figure 16).

Now we run our SOAP client in a browser. It accesses WSDL and the SOAP server, retrieving our apple varieties (Figure 17).

Figure 17: The client, the server, and the WSDL file work together.

According to Andi Gutmans and Michael Pinette, Zend's releases for System i will be as follows:

Figure 19: Zend is steadily providing all its products to IBM System i.

A New Approach to System i Web Development

In porting PHP to System i, IBM and Zend have given the community a powerful, low-risk approach to Web development. Developers who use PHP strengthen the platform while mastering technology that can run almost anywhere. PHP re-energizes System i with advanced capabilities for the Web that are easy to use. The advantages of System i—reliability, virtualization, scalability—remain.

Alan Seiden is a consultant and developer at a northern New Jersey IT firm, where he enjoys his role as a creative software catalyst for clients. Alan is vice president of the New York City Usability Professionals Association. Email: This email address is being protected from spambots. You need JavaScript enabled to view it..