Remember the humorous MasterCard commercials from a few years ago? In my mind, I see one of them going like this:

Discovering you can generate and distribute audit reports automatically: PRICELESS

This joke probably isn't too funny to anyone who's responsible for generating audit reports from IBM i. Despite the server's incredible security infrastructure, auditing remains primarily a manual and thankless chore. And let's face it; any task that's thankless and manual probably won't get done. Even with a commercial audit tool, a user must decide what reports to run and then compile and interpret the results.

One of the most common report requests from auditors is for the powerful users on the system. Your first question is likely to be "What classifies a powerful user?" Unfortunately, there's no official auditor's dictionary (wouldn't that be nice!). And each auditor has different criteria that they're looking for.

Maybe you're can omit IBM-supplied profiles, disabled profiles that haven't signed on for at least 45 days, and any profiles without a password. They'll ask for each of those reports separately. Then, don't forget to include the users from all 15 production IBM i partitions, preferably on a single report so it's easier to process.

Here's one way to accomplish this task:

Step 1: Run IBM's user profile report (PRTUSRPRF) to dump the configuration data for all defined users. Print a hard copy of the report, or figure out how to use iSeries Navigator to download it to your PC.

Step 2: Manually review each user profile to see if it meets the auditor's criteria—and hope you don't have too many profiles to deal with! Don't forget special authorities of the 16 possible group profiles the user might belong to in case any authority is inherited. Oh, and the report doesn't include the number of days since prior sign-on, so you'll have to determine what the date was 45 days ago and check that manually. You'll also have to manually exclude the "known" users from the report each time.

Step 3: Document the name of the users that remain.

Step 4: Return to Step 1 and repeat for the next server.

Step 5: Aggregate the results into a single report (somehow) and distribute it to the auditor (somehow) in a secure manner.

Next, prepare to prove to the auditor that the information hasn't been tampered with (since you're likely to be one of those powerful users.) Also, expect to be asked for a lot more than one simple report.

This is a fictitious scenario, but it's not unrealistic. It doesn't take very long to realize that the process is tedious, time-consuming, and expensive—not to mention that it's error-prone and it's arguably considered self-policing.

Compliance Monitor 3 from PowerTech has been redesigned and repackaged, and it comes equipped with even more reports. Powerful (and modifiable) filters can be applied instantly to the data, making child's play out of creating custom audit reports. And a brand new assessment scheduling and distribution function allows you to run reports at predefined intervals across multiple systems and distribute them on completion.

Step 1: Point and click to select any or all of the systems to be assessed.

Step 2: Point and click to select any or all of the hundreds of available reports to include.

Step 4: Sit back and relax.

You can send the reports automatically via email as individual files or bundled into a password-protected (and encrypted) zip file. Report files can be generated as editable or as PDFs that are digitally signed to assure auditors that the information hasn't been tampered with. If you prefer, the reports can be placed in the IFS for the user to access (see Figure 1). 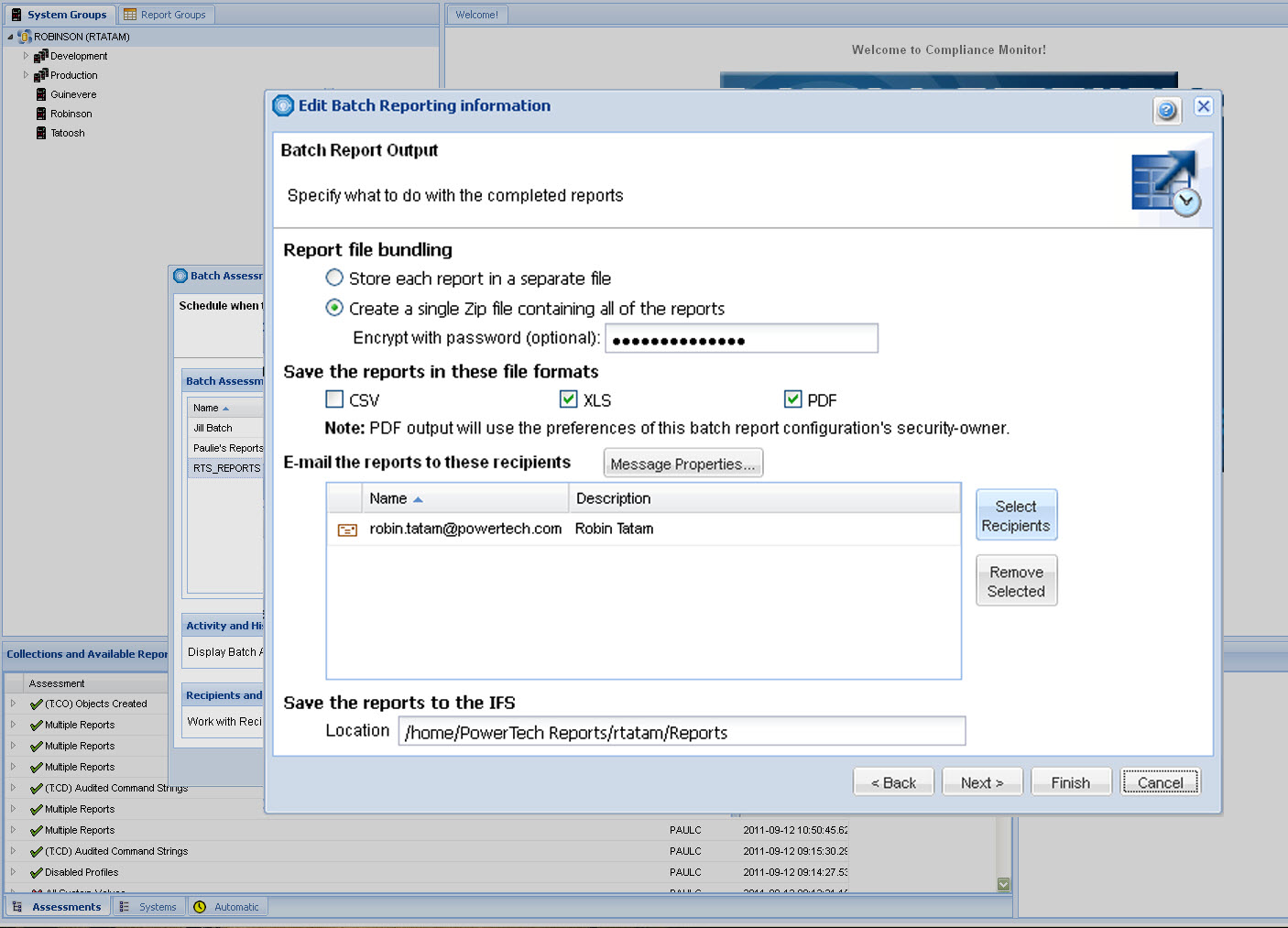 Compliance Monitor 3 provides the mechanism to eliminate the burden of audit reporting. Hundreds of report options give visibility to static information, such as user profiles and system values, as well as dynamic events recorded into the security audit journal, QAUDJRN. Click here to learn more about Compliance Monitor.