Hello! Welcome to Security Patrol. Let me introduce myself. I am Officer Woodbury, newly appointed security officer of this monthly feature. I admit to accepting this new position with a bit of trepidation, because the previous security officers have filled their respective roles so well. Quite frankly, they have left me with some rather large shoes to fill!

I may be the security officer, but you are the judge. Hopefully, you'll find me worthy of the position to which I've been appointed. So here we go. This month, I'll respond to readers' security questions.

Q: Because of the requirements of the application my company is running, I'm forced to give everyone in the HR department *ALLOBJ special authority. I didn't think this would be too much of a problem since, for the rest of the files on the system that I didn't want them to access, I could just grant private authority *EXCLUDE to the HRGroup group profile. However, I have found out that the HRGroup can still access every file on the system. What's going on?

A: This requires a basic understanding of how OS/400 checks authority. The first thing that OS/400 checks is to see if the user has *ALLOBJ special authority. If he does, the user gets access to the file. No further authorities are checked. That's why it's so dangerous to assign users *ALLOBJ. They cannot be prevented from accessing objects. You may have excluded the user's group from a file, but OS/400 will never look that far.

Q: I have re-architected our authority scheme to use group profiles, creating a group profile for the users of each application on our system. I thought they were supposed to be a great management tool. I granted each group private authority *USE to each of their respective application files. However, none of the users can access their files, and I've had to give them *ALLOBJ so they can get their work done. Help!

Here's another hint: When displaying the authority to the file, make sure you have signed on with sufficient authority. To see all of an object's authorities, you must have object management (*OBJMGT) authority. If you don't, you only see the authority you have to the object. Figure 1 shows what JOE_USER saw when he signed on and displayed the authority of PGM_B. 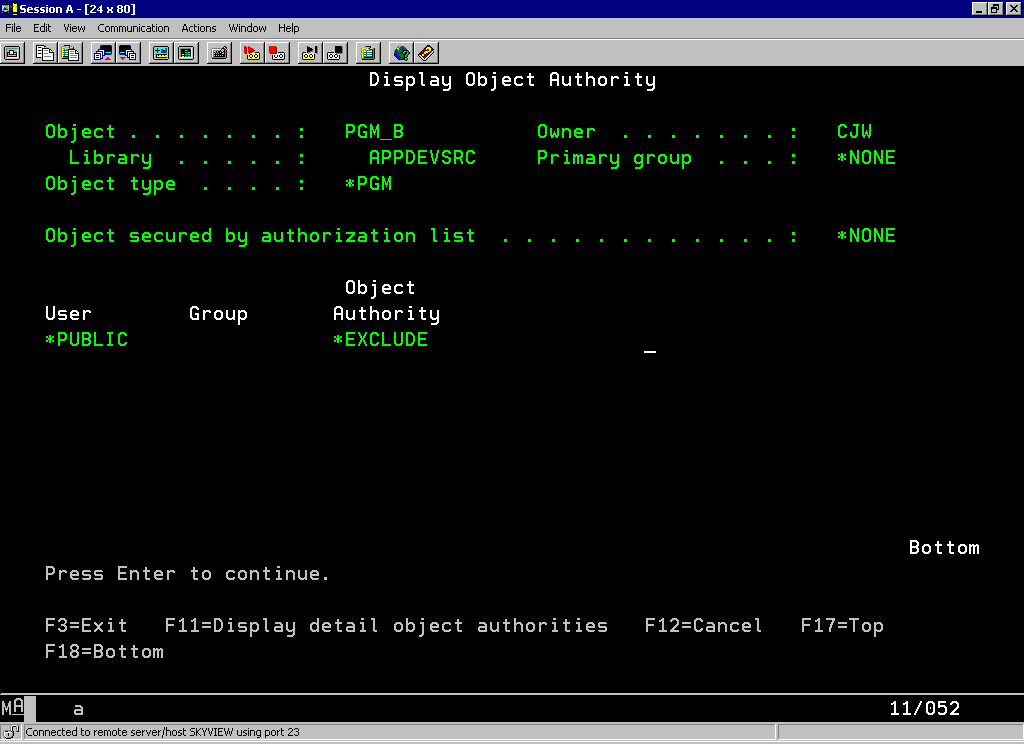 Figure 1: Unless you have *OBJMGT authority, you will see only the authority you have to the object.

Once he was given *OBJMGT authority, he saw the screen shown in Figure 2. 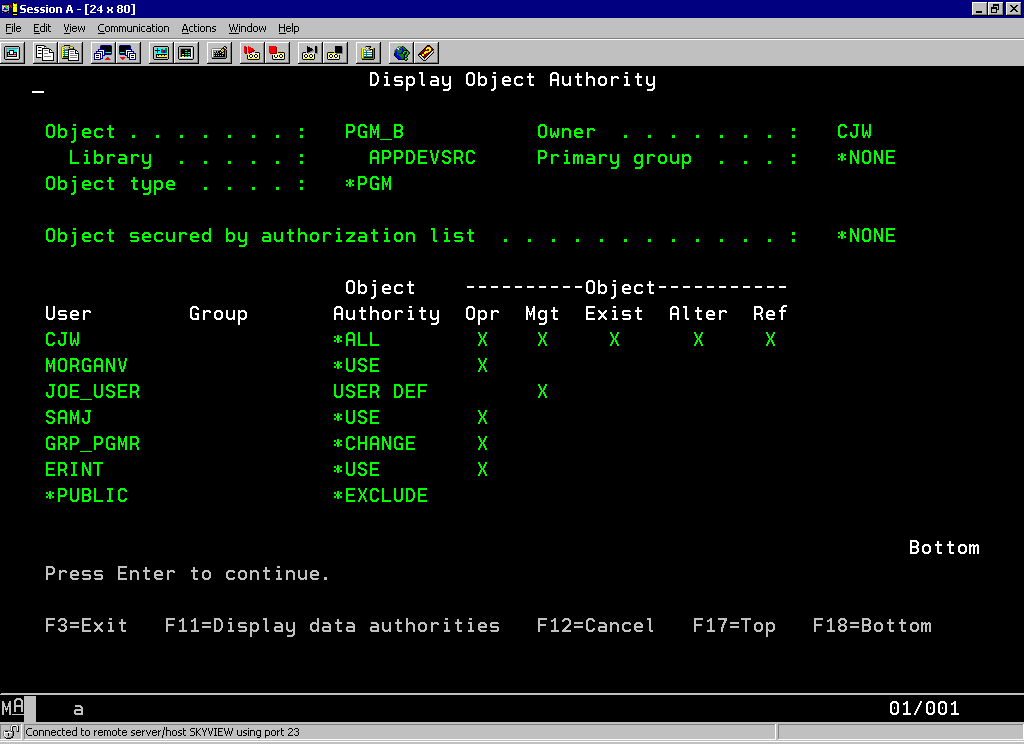 Figure 2 : With *OBJMGT authority, you can see all of the object's authorities.

Q: Our inventory management application uses application-only access for its security scheme. We recently installed a new version of the application, and now users are getting authority violations when trying to perform certain functions like updating inventory levels. Can you help me figure out why?

A: Application-only access typically means that the public access for all objects--especially files--is set to *EXCLUDE. Then, the programs are configured to adopt their owner's authority. The program owner then either owns the data files or has sufficient authority to the data files to do all application functions.

Q: We are overhauling our application vendor's security scheme. (It was shipped with all objects set to *PUBLIC(*ALL)! Can you believe that?) Anyway, we want to change to implement a variation of application-only access. (We will probably set public access to *USE rather than *EXCLUDE.) To still allow updating the files through the application, we will have to change them to adopt authority. Is there anything I should watch out for before we start down this road?

A: The first thing to look for is whether the application programs were shipped with observability. If they are not, you cannot change the program. In other words, when you do a Change Program (CHGPGM) command and change the User profile attribute from *USER to *OWNER, OS/400 re-translates the program. If observability has been removed, OS/400 can't re-translate and you can't change this attribute. If this is the case, you are going to have to ask your vendor to work with you to meet your security requirements.

Second, whether the programs are shipped with observability or not, you should contact your vendor. First, they may already have a documented procedure to secure their application (why they don't then just ship the application configured securely is beyond me, but I digress). Next, they may be able to tell you things to watch out for or authority requirements for various parts of the application. Finally, some vendors are real schmucks and will tell you that if you change the attributes or configuration of their application, you will void any agreements, obligations, or contracts. You will have to then make a business choice if you want to go ahead with your planned changes.

Q: I have an output queue that was created with AUTCHK(*OWNER), yet one of my operators can still work with its spooled files. I thought only the owner of the spooled files could access these, given the AUTCHK setting. What am I missing?

Q: How does authority checking work with multiple groups?

When a user has more than one group profile, the authority the groups have to the object being accessed is accumulated (sounds strange, I know, but hang in there with me). OS/400 accumulates authority until either it finds sufficient authority to access the object or there are no more groups to check. Say a user, Abby, is responsible for adding new employees to the HR database. To do that, she needs *CHANGE to the file. Abby is a member of five group profiles. GRP_1 has *OBJOPR; GRP_2 has *READ and *ADD; and GRP_5 has *UPDATE, *DELETE, and *EXECUTE. Once the authority checking algorithm adds in GRP_5's authority, the user will have sufficient authority (*CHANGE) to access the file. I didn't mention Abby's groups GRP_3 or GRP_4. GRP_3 has no authority to the HR database. GRP_4 actually has *EXCLUDE authority to the database. What's up with that, you ask? How can Abby still get access to the database when this group is excluded from it? Well, OS/400 basically treats this instance as a "no-op" and keeps processing. If GRP_4 were Abby's only group, she would have been excluded from the HR database.
If you're confused, don't worry about it. This is the way it's worked for many years now, and I've never heard of anyone having any difficulties implementing multiple groups and their accumulating authorities.

Q: Severe damage to our building after an earthquake required that we move locations without warning. We didn't even have the opportunity to make a current backup. However, we have a backup strategy in place, so we only lost one day's orders. We went to our backup location and restored our most recent backup. Everything was going well until we realized that all of our objects are owned by QDFTOWN. What went wrong, and how do we fix our objects' ownership?

A: For disaster recovery, you must carefully follow the instructions IBM gives you in the Backup and Recovery manual (SC41-5304), but obviously you don't need those words of advice at this point in time!

I am guessing that your system's recovery was performed in the wrong sequence. First, you must install OS/400, then restore your user profiles, then restore your user objects. It appears that, in this case, user objects were restored before user profiles. If you think that re-restoring all the user objects will fix this problem, it won't. OS/400 "preserves" the ownership of all objects currently on the system. This means that programs that are currently owned by QDFTOWN on your iSeries, but are owned by REAL_USER on media, will remain owned by QDFTOWN even if you restore them again. You will either have to change the ownership of each object individually, remembering which profile was really supposed to own the objects, or, more realistically, start your disaster recovery process all over. As onerous as this sounds, this is probably the solution that will be the most "foolproof."

If you would like to submit a question for possible inclusion in a future Security Patrol, please send it to This email address is being protected from spambots. You need JavaScript enabled to view it.. Make sure to put "Security Patrol Question" in the Subject line.

Carol Woodbury is co-author of the book Implementing AS/400 Security as well as co-founder of SkyView Partners, a firm specializing in security consulting and services. Carol has over 12 years in the security industry, 10 of those working for IBM's Enterprise Server Group as the AS/400 Security Architect and Chief Engineering Manager of Security Technology.

Carol Woodbury is President and CTO at DXR Security, a company dedicated to helping organizations improve the security of their IBM i Systems - one step at a time. Previously, she was Vice President of Global Security Services for HelpSystems and President of SkyView Partners, a firm that specialized in security services and security administration and compliance software before it was acquired by HelpSystems. Carol's foundation of security experience comes from her 16 years with IBM in Rochester, Minnesota, where she served for 10 years as the AS/400 Security Architect and Chief Engineering Manager of Security Technology for IBM's Enterprise Server Group. During that time, Carol provided security architecture and design consultations with IBM Business Partners and larger AS/400 customers.

Carol is known worldwide as an author and award-winning speaker on security technology, specializing in IBM i security issues. She has authored six books on IBM i security. Carol holds the CISSP, CRISC, and PCIP security certifications and has been named an IBM Champion since 2018.