Q: I am new to the iSeries 400 and have just been given the job of security officer. The programmers will sometimes throw the term "adopted authority" into the conversation, but I can't find a definition of the term. Help!

Adopted authority is often used by application developers to implement Wayne Evans' "Application Only Access" authorization model. In this authorization model, objects, such as database files, can be accessed only when a user performs an authorized function. These authorized functions are typically enabled via application menu options. Any attempt by a user to access a file directly, using an interface such as FTP, will fail with a "Not authorized" message. These attempts fail because public access is typically set at *EXCLUDE and users are not given a private or explicit authority to the application objects. However, users will be able to perform necessary functions when going through the application, because the profile that owns the programs that actually run the menu options adopts the owner's authority. The program owner then either owns the database files or, in more secure implementations, has just enough authority to the application objects to perform the application's functions.

Another popular implementation of adopted authority is used on system administrators' and operators' menus. Admins and operators are often given menus from which they perform their tasks. You can build a menu in which one or more options is a function that requires more authority than the system administrator or operator has been given. For example, to reset a user's password, you need authority to the user profile and *SECADM special authority. Rather than give the system administrators *SECADM, you can create a menu option that calls a program that does the Change User Profile (CHGUSRPRF) command. This program adopts and is owned by a profile that has *SECADM special authority, as well as *USE and *OBJMGT authority to all profiles on the system. 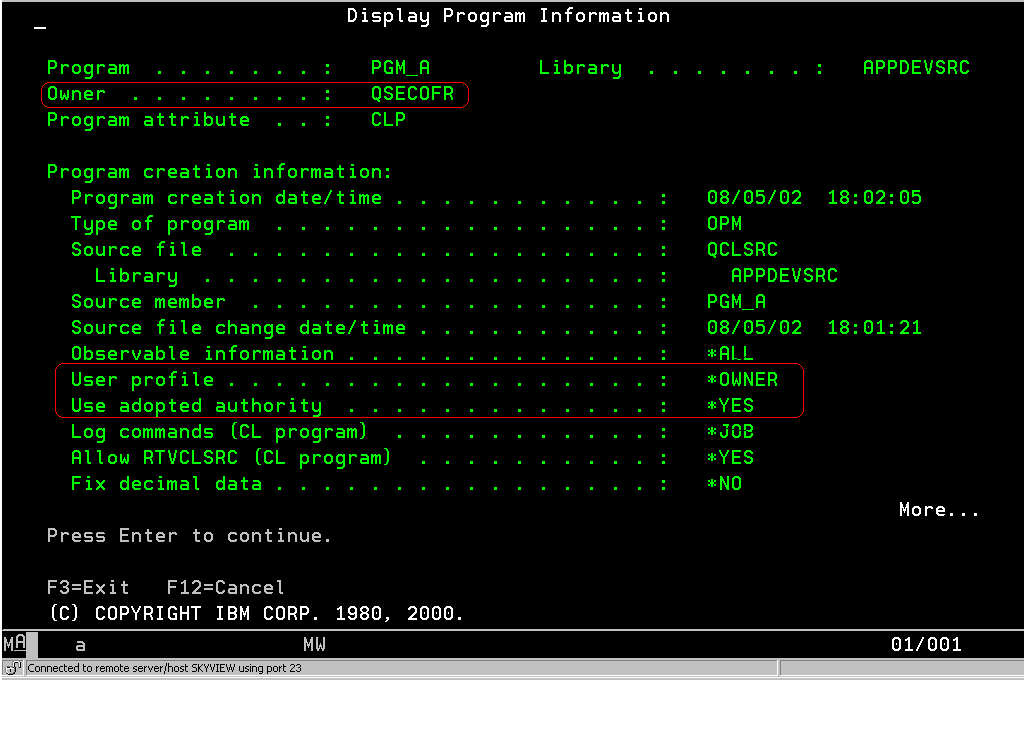 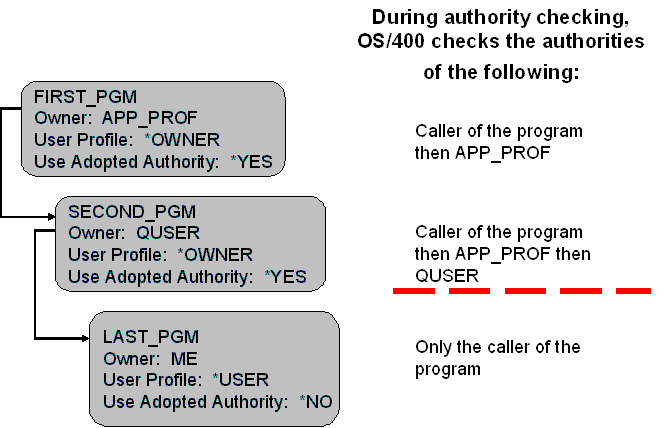 Figure 2: This figure shows how adopted authority is passed from one program to another.
Step 1: Someone or some menu option calls FIRST_PGM. It adopts the authority of the application profile (you know this because the User profile parameter is *OWNER). When OS/400 checks to see if objects can be accessed, it first checks the authorities of the caller of the program. If not sufficient, then APP_PROF's authorities are checked.

Step 2: FIRST_PGM calls SECOND_PGM. Because the Use adopted authority parameter has been left at the default *YES, it means that when OS/400 checks authorities, it will check the authorities of the caller of the program, APP_PROF (because SECOND_PGM is using the adopted authority being passed to it from FIRST_PGM) as well as QUSER (because SECOND_PGM itself adopts and is owned by QUSER.)

Obvious observations:
Because adopted authority flows from one program to the next, you'll want to be careful to not put up command lines, etc. that will give a user access to the adopted authority. The worst scenario is that a program is owned by QSECOFR and adopts and then puts up a command line or the command entry screen!

Q: It's pretty easy to determine what calls are made out of a program and which ones of those are library qualified (or not). Some third-party applications adopt a profile like QSECOFR and then make *LIBL calls. This has created a huge exposure for my system. What can I do to eliminate this risk?

A: There are a couple of ways to fight this problem. First, make sure there are no libraries in the library list (especially the system portion of the library list) that allow someone to add a program into them. In other words, eliminate the libraries to which users have *CHANGE authority. You may not be able to eliminate them all because users often have a legitimate need to create objects into libraries. In that case, move the library with *CHANGE authority as far down in the library list as possible. The idea is to remove the opportunity to have a "rogue" program called instead of the one that's supposed to be called.

What Is Included in Adopted Authority?

Q: Exactly what authorities get checked when adopted authority is in effect?

A: The program owner's authorities are checked. These include any private authorities to individual objects or authorization lists, ownership to other objects, and any special authorities (such as *ALLOBJ or *SECADM) the owner has.

Q: When a program adopts its owner's authority, does that include the owner's groups?

A: No. When OS/400 checks authority, it only checks the program owner's authorities, not any groups the owner may have.

How Adopted Authority Works with the IFS

Q: I'm setting up an application and trying to serve Web pages out of the Integrated File System (IFS). The directories are set as *PUBLIC(*EXCLUDE), and I've changed the user profile parameter of the programs to *OWNER. But when I call the program that's adopting, I get a "not authorized" message. I've implemented adopted authority before, and I know that I've got everything configured correctly. What's going on?

A: Unfortunately, the title of this section would be better listed as "How Adopted Authority Doesn't Work with the IFS." When accessing objects in the IFS, OS/400 totally ignores any adopted authority that may be in effect.

Q: Does adopted authority have an effect on system performance?

A: It depends. If the program owner also owns the object being accessed (like the database file being opened), this an extremely fast check, thanks to an enhancement added by the folks in Rochester. If the program owner has a private authority to the object, the check is slightly slower, but it's quite doubtful you'd ever notice a performance hit using that method.

Q: Several user profiles have appeared on the system, and they were not created based on the normal request process from HR. I suspect that a couple of my programmers are abusing the fact that one of our third-party applications adopts authority and doesn't make library-qualified calls. Is there any way I can find out for sure?

In addition, the Display Programs that Adopt (DSPPGMADP) and Print Adopting Objects (PRTADPOBJ) commands will help you find the programs, service programs, and SQL packages that adopt.

If you would like to submit a question for possible inclusion in a future Security Patrol, please send it to This email address is being protected from spambots. You need JavaScript enabled to view it.. Make sure to put "Security Patrol Question" in the Subject line.

Carol Woodbury is co-author of the book Implementing AS/400 Security as well as co-founder of SkyView Partners, a firm specializing in security consulting and services. Carol has over 12 years in the security industry, 10 of those working for IBM's Enterprise Server Group as the AS/400 Security Architect and Chief Engineering Manager of Security Technology.