Mention the idea of placing more than one value in a field to a relational database programmer and you might get a negative response like, “Are you crazy?” After all, in the rules of normalization, storing multiple values in a field is simply not allowed. Of course, Lotus Notes’ proprietary database system isn’t relational, so you don’t need to worry too much about following the rules of normalization. With Notes, you’ll spend less time dealing with the rules of normalization, which should allow you to develop the application faster and possibly free up more time to design a better application for the user. Now, that is not to say that the transaction scalability of the application will be as good as a relational database system. In general, Notes applications don’t require large transaction
volumes—and that is the assumption taken here. The bottom line is Notes will allow you to create applications quickly and easily, and multivalue fields contribute to that speed and ease. But, you will need to understand what multivalue fields are and how to use them (from a user and developer perspective) to get the most from them. The purpose of this article is to show you how to use and program multivalue fields. (Please note that some user and designer knowledge of Notes is assumed.)

The Basics of Using Multivalue Fields

A multivalue field is one that may contain a list of values. In Notes, the field will always be of a certain type such as Text, Number, or Date. Except for the Rich Text, ComboBox, Password, and Radio Button field types (which allow only one choice), all Notes field types can contain multivalues. You could think of a Notes multivalue field as an array, but much easier to use than an array when it comes to processing and displaying its values.

The designer of an application indicates that a field is a multivalue field by checking the Allow multiple values property on the Basics tab of the field properties dialog. (You access the property dialog for a field by right-clicking on the field when you’re in design mode.)

separate the values. Notice that spaces in multivalue text fields are not considered as separators. With numeric fields, you can separate values with a comma or semicolon, or additionally, a space. For example, 1 2 3 4 5 entered into a multivalue numeric field will create a number list containing five values.

When multivalue fields are used in a Notes view (somewhat similar to a spreadsheet) column, the view column will contain all values of the field separated by a comma or any other valid separator character specified by the developer. That is the case as long as the view column has enough horizontal or vertical space to display all the values.

In a view column, you have choices as to how multivalues are separated and displayed. The default separator character value for a view column is None, which causes the values to be separated with a comma. It’s the same as if you were to specify a comma as the separator character. The valid separator character values a developer can specify for view columns are None, Space, Comma, Semicolon, and New Line. Choosing the New Line value will cause a line break in the view column for each value contained in the list. The result will be a vertical stack of values. However, if you use this option, be sure to specify that your view is to display more than one line per row (the Lines Per Row view property). Nine rows are the maximum number of lines you can display per view row on Notes clients. This limit does not exist, however, on the Web interface. In fact, the Line Per Row property has no effect on the Web interface.

If you sort a column in a view containing a multivalue field and you specify the sort type as Categorized, Notes will create a separate row for each value in the field. In other words, the document will appear in the view multiple times as if the database contained more documents than it actually does. For example, a Notes document contains a color option field named ColorOptions containing three values (i.e., Red, Green, and Blue). If the column is sorted and the sort type is specified as Categorized, the view will contain three rows for what is essentially one document. Figure 1 illustrates a view similar to the one just described. A single document categorized by its multivalue ColorOptions field, containing values Red, Green, and Blue, causes three rows to be displayed.

You can programmatically search for a value in a multivalue field using the @Contains function of the Notes formula language. For example, if the ColorOptions field contains three values (Green, Black, and Red), the following expression would return the value Red:

If Red was not in the ColorOptions field, the expression would return Red not found. You can determine the number of items in a multivalue field with the @Element

function. For example, the following expression will return the value 3 for the ColorOptions field mentioned in the previous paragraph.

You can retrieve a subset of a multivalue field with the @Subset function. For example, using the same ColorOptions field, the following expression will return the values Green and Black:

The second parameter value of 2 indicates that you want the first two values of the list starting from the left.

Using the same ColorOption field, this expression will return Black and Red.

The second parameter value of -2 indicates that you want the last two values of the list starting from the right.

For more powerful programming, you can use LotusScript to search for values in a multivalue field. (Note that, in all of the LotusScript examples in this article, I’m working with the back-end database and not the front-end user interface.) For example, the following LotusScript code uses the Contains method (somewhat similar to the @Contains function used earlier) of the NotesItem class to determine if the value of “Preferred” is contained in a multivalue field named Type.

The next example accomplishes the same thing but uses a simple comparison in a looping technique instead of the Contains method.

When using the GetItemValue method (as I’ve done in the previous code segment), it’s important to remember to define the receiving variable as type Variant.

You can programmatically load a value into a multivalue field using the Notes formula language @SetField function as illustrated here:

To add a value to a multivalue text field with LotusScript, you can use the AppendToTextList method of the NotesItem class. For example, the following code, which is executed from a form button, will add the value of “Purple” to the multivalue field ColorOptions:

To replace the values of a multivalue field with an entirely new list of values, you could use code similar to the following:

Displaying Multiple Values on Separate Lines on a Form

If you find you want to display the values of a multivalue field on separate lines in a Form, you can do so by implementing the following. Create a Computed For Display field whose value is obtained from the multivalue field (its Value property contains the multivalue field name). Use the property dialog for the field you just created to assign these properties: check the Allow multiple values property on the Basics tab and on the Advanced tab specify New Line as the value for the Display Separate Values property. As an option to using New Line, you could specify Blank Line, which would place an extra blank line between each value.

You can use this same technique to display computed multiple values. For example, you could use the @DbLookup function to compute a multivalue list by retrieving a column value from a view. The following expression could be used as the value for a Computed For Display field as described in the previous paragraph.

value in UniqueID field. Assuming more than one row matches the key, the system would return a multivalue list.

Assume you want to stack a customer’s address vertically in a Notes view row by using the New Line technique described earlier. However, the address isn’t stored in a multivalue field—it’s stored in six separate single-value fields. What you can do is create a multivalue list on the fly by concatenating the single value fields into a text list using the colon character.

Here is the expression for the view column:

Figure 2 (page 61) illustrates a view that uses the technique I just described.

Go Ahead. Break the Rules!

Figure 1: If categorized in a Notes view, a document field containing multiple values will be displayed multiple times—once for each value in the field. 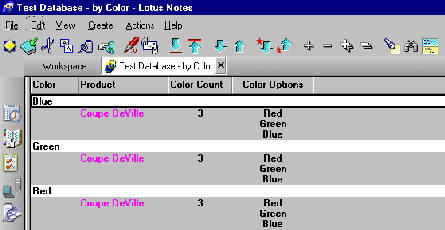 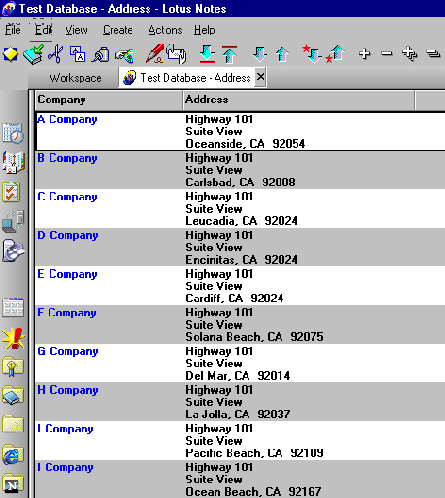 Figure 2: The values in the Address column are derived from a computed text list and stacked vertically by specifying New Line as the separator character in the column properties.