The concern I have as a customer when a vendor consistently underdelivers based on their plan is palpable. As you can see from the chart below, we loyal customers have been waiting an awfully long time for a simple point release since 9.0.1. 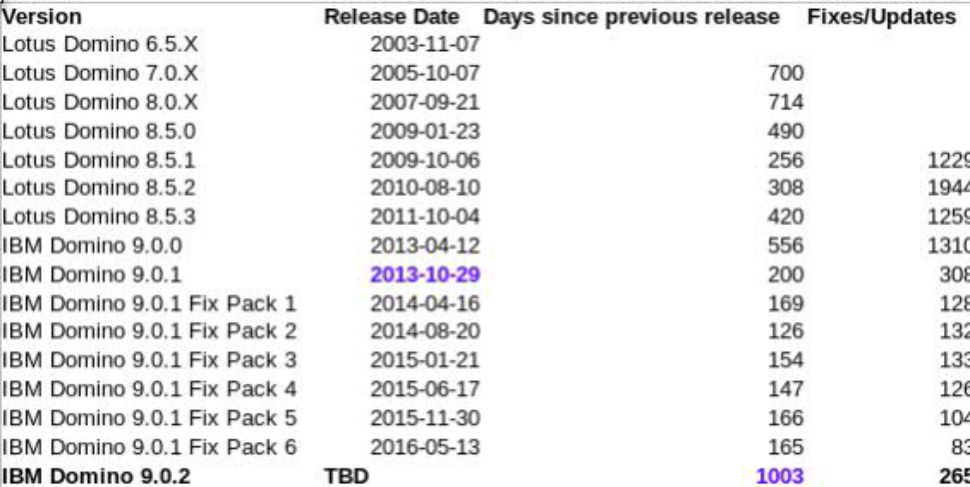 What features of 9.0.2 are important? Java 8 is probably the biggest at this point in time. For all other platforms except IBM i, Domino is shipped with its own internal JVM 1.6. Every Notes client uses Java 1.6 as well. For developers, it’s a concern. From a security perspective, it’s a concern.

But the features, while important, are not my main argument.

Features get rolled into Fix Packs. They come out on a relatively regular basis, although sometimes you need to kick and scream for things that should’ve been delivered far sooner than they finally were. But for the most part, as you can see from the amount of fixes and updates IBM put into the last number of Fix Pack iterations for Domino, the number is relatively half of what comes out in a point or full release, except it’s spread over a time period three times as long.

IBM seems content to keep developing for the cloud or Verse. Or both. I’m not even sure what to call the cloud products nowadays. I know Verse is still a product because the app hasn’t been renamed like Sametime (aka IBM Connections Chat). Either way, naming digs aside, the fact that features and fixes output for Notes/Domino is a fraction of what it was a mere five years ago tells you that the products are not getting even similar attention to anything with a cloud-first business model.

I recently spoke with a senior IBMer who said that, although some senior IBMers have stated publicly that 9.0.1 could be the last release of Notes/Domino for on-premises customers, IBM has every intention to keep supporting Notes/Domino on-premises for the foreseeable future. Talk about a clear message.

I’m concerned that IBM reps would speculate publicly that 9.0.1 will be the last release for Domino on-premises. It doesn't make customers feel like they have a stable footing. Tell people you'll be supported, and they'll be more inclined to stay. Speculate on the death of on-premises software and you're going to have customers start looking elsewhere for solutions. They don’t all want the cloud. In fact, as the Bridge to Cloud and Dual Entitlement software options customers are purchasing in place of standard software maintenance are actually counted as cloud customers, it’s no wonder that some at IBM are starting to believe their own cloud hype. If your servers and clients are on-premises, and you have Dual Entitlement or Bridge to Cloud, then you’re counted as a cloud customer. Cloud revenue goes up no matter how many customers are actually using IBM’s cloud for Domino or Verse. Personally, I’ve refused both Bridge and Dual deals on principle. I’ve had IBM Business Partners try to sell them. I’ve had IBM reps I’ve never heard from before kick in and try to sell them after Business Partners have had no luck. The push is on to get Domino customers into the cloud bucket, at least on paper. The day very well may come when all we’ll have is a subscription model to buy instead of standard software maintenance. We’ll see.

Meanwhile, those very same “cloud” Notes and Domino on-premises installations are being starved for new features, fixes, and enhancements, which leads to the crux of my argument.

Not giving Notes and Domino the attention a billion-dollar-a-year product deserves will cost IBM on-premises customers.

And finally, not doing both of those will cost IBM cloud customer subscriptions for Dual Entitlement and Bridge to Cloud. At some point, the on-premises Domino versions could be so long in the tooth that going to the cloud is the only viable option to remain a Domino shop.

How easy would it be to convince your boss to move to a cloud model for email? What about the IBM cloud for email?

Once the cloud door has been opened, every vendor becomes an option. While IBM does some things incredibly well, I don’t see them as a leader in Software as a Service (SaaS), no matter what their numbers say.

The fact of the matter is that IBM has many, many on-premises customers who don’t feel that IBM Notes and Domino are on solid ground. IBM needs to step up and make a commitment to on-premises customers and give both on-prem and cloud equal attention. If not, they’re gambling on long-time customers going the cloud route, where IBM has to compete with Microsoft and Google, who have very stable services. This is a gamble that IBM shouldn’t make.

If you actually listen to the Domino enthusiasts out there, and they are out there, they lament for not what Notes and Domino were, but what they could be. The number of Notes and Domino installations is one of the largest customer sets that IBM has for software.

The ethical thing for IBM to do is set a plan for Notes/Domino customers and then hit it. Customers need to plan three to five years into the future. Three years ago, many thought they’d be on Domino 9.0.2 by 2016. Sadly, we’ve hit 2016, and there’s still no plan for 9.0.2, although Verse on-premises is apparently targeted for fall 2016.

Verse by the way, will probably have no IBM i support out of the gate due to the additional server requirements for it to run. However, this isn’t a platform argument. This is an on-premises software planning argument. At this point, if IBM had a plan for 9.0.2 Domino on Windows Server, only then it would be a step forward. Unfortunately, that isn’t the case either.