IBM BLU Acceleration is a collection of technologies from the IBM Research and Development Labs that accelerate analytics and reporting. It is one of the most significant pieces of technology that has ever been delivered in DB2 and, arguably, the database market in general; it delivers unparalleled performance improvements for analytic applications and reporting using dynamic, in-memory optimized, columnar technologies.

Simple to Implement and Use

Arguably, one of the most important design principles of BLU Acceleration was simplicity and ease of use. As a result, a significant amount of autonomics and intelligence around BLU Acceleration has been built into the DB2 engine. Basically, all a user needs to do to take advantage of this technology is configure a DB2 10.5 database environment for BLU Acceleration (by assigning the value ANALYTICS to the DB2_WORKLOAD registry variable), create the tables needed, load them with data, and then run queries against them. It’s that simple. Database administration procedures and the SQL language used remain unchanged, as do system commands, utilities, and the DB2 storage model.

Because of the way in which BLU Acceleration has been designed, there is no need to create indexes, multidimensional clustering (MDC) tables, materialized query tables (MQTs), statistical views, materialized views, or partitioned tables to improve query performance. And without these auxiliary objects, administrative and maintenance efforts are greatly reduced. 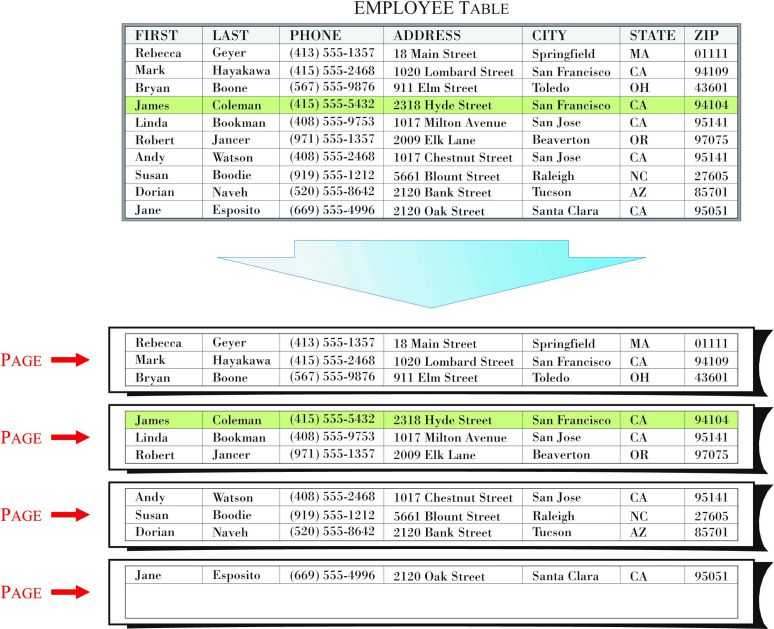 Figure 1: How data for a row-organized table is stored 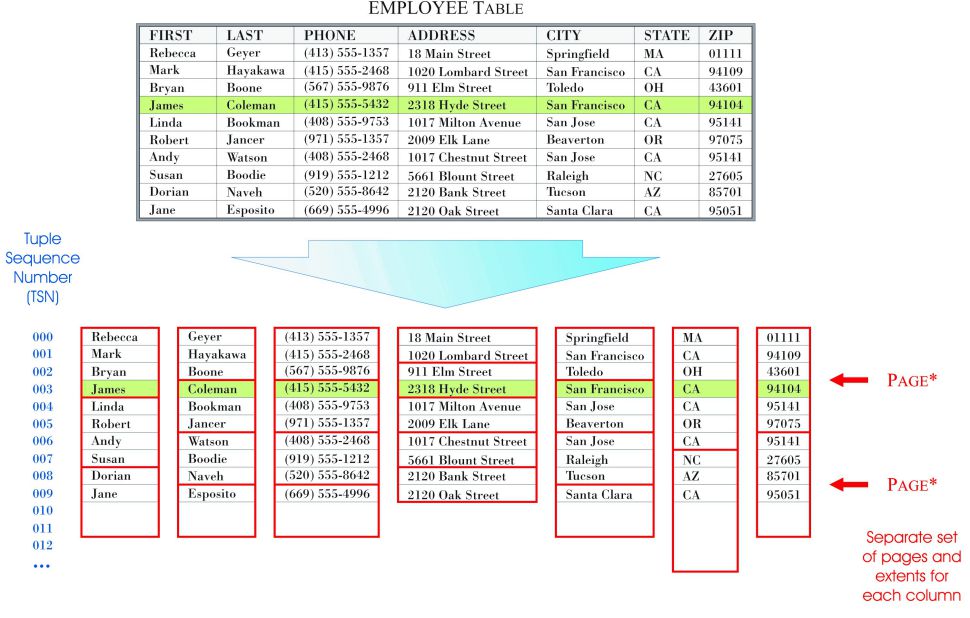 Figure 2: How data for a column-organized table is stored; the Tuple Sequence Number (TSN) is a logical row identifier that is used to “stitch together” values from the different columns that form a row.

Storing data by column offers several benefits to analytic workloads. For one thing, such workloads tend to access a subset of the columns found in one or more tables. So, by storing data using a columnar approach, DB2 only has to move data for the appropriate subset of columns from disk to memory (as opposed to having to move data for an entire row). This ensures that only the data that is needed is retrieved from disk with every I/O operation that’s performed. And, because more data values can be stored on a single page, fewer I/O requests are required. Another benefit is that column-organized tables tend to compress very efficiently—the probability of finding repeating patterns on a page is high when the data on that page comes from a single column.

Another key feature of BLU Acceleration is the way in which data for column-organized tables is encoded and compressed—column-organized tables are compressed automatically, using a technique known as approximate Huffman encoding. With this form of compression, values that appear more frequently are encoded at a higher level than values that don’t appear as often. Using a serial stream of zeros (0s) and ones (1s), each value is assigned eight bits. Then, the encoded data is packed as tightly as possible into a collection of bits that equal the register width of the CPU being used. Figure 3 illustrates how this type of compression works.

Another compression optimization technique that’s used in BLU Acceleration is a process known as offset coding. Offset coding is very useful with numeric data; instead of trying to compress a set of numbers like 100, 101, 102, and 103, DB2 will store the first value (100) and then it will store the appropriate offsets from that value (1, 2, 3, and so forth) for the remaining numbers in the set.

Generally, compression for column-organized tables can be anywhere from 3 to 10 times better than that of similar row-organized tables. More importantly, data stored in column-organized tables does not have to be decompressed before it can be used in many SQL operations—operations that perform predicate evaluations, joins, and data grouping can work directly with encoded data. This enables DB2 to delay the materialization of compressed data for as long as possible, which leads to a more effective use of CPU and memory, along with a reduction in disk I/O.

Another important feature of BLU Acceleration is its ability to exploit a leading-edge technology that is found in many of today‘s modern processors: Single-Instruction, Multiple-Data (SIMD) processing. SIMD instructions are low-level CPU instructions that enable an application to perform the same operation on multiple data points at the same time. BLU Acceleration will auto-detect when DB2 is running on a SIMD-enabled CPU and automatically exploit SIMD to effectively multiply the power of the processor. For example, suppose a query designed to produce a list of all purchases made in December is executed. Without SIMD, the processor must evaluate the query predicate (i.e., does MONTH = 'December'?) one value at a time. Each value for MONTH (for example, September, October, November) would be loaded into its own processor register, and multiple iterations of the instruction would be required. With SIMD, the results for all three months could be obtained with a single instruction, provided the values are loaded into the same register. This results in faster predicate processing. Figure 4 illustrates how the scenario just described might be processed by a SIMD-enabled CPU. 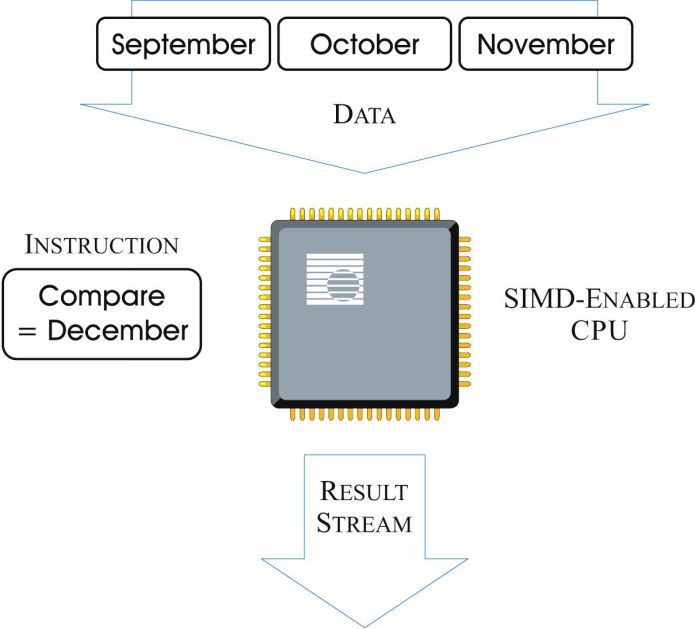 Although the example just presented demonstrates how SIMD helps with predicate evaluation, it’s important to note that SIMD exploitation can be used to do scans, joins, grouping, and arithmetic operations. Also, in the previous example, three data values (September, October, and November) were used for display purposes only; the actual number of data elements that can be processed by a single instruction is determined by the size of each element.

Core-friendly parallelism refers to BLU Acceleration’s ability to take advantage of the growing number of cores found on CPU processors to drive multicore parallelism for queries. This is accomplished through the use of several comprehensive algorithms that determine where data that will be revisited should be placed in CPU cache, as well as how work should be shipped across every socket. To maximize parallelization and throughput, all processor cores, memory, and threads available is utilized.

Most databases employ variations of what are known as Least Recently Used (LRU) and Most Recently Used (MRU) paging algorithms to keep data that was recently accessed in memory and to remove older data when space for new data is needed. But these algorithms do not work well with analytical workloads. That’s because analytical workloads are likely to start at the top of a table and scan their way to the bottom. And if the table is large, the LRU algorithm will remove pages that were read at the start of the scan to make room for those read at the end. Consequently, the next time a scan of the same table is initiated (say, to perform an aggregation or join operation), memory is searched for pages that were read from the beginning of the table, and when they’re not found, they have to be retrieved from disk.

To resolve this issue, a special “scan-friendly” memory caching algorithm was developed and incorporated in BLU Acceleration. This algorithm works by detecting “interested” data patterns that are likely to be revisited, and then holding pages with similar data patterns in memory as long as possible.

The last important feature that’s available with BLU Acceleration is the ability to skip ranges of data that are not relevant to an active query. For example, if a query needs to calculate the total dollar amount of every order placed during the month of January, BLU Acceleration can go straight to the data that contains order information for just that month and skip over all non-qualifying data. That’s because as operations are performed against column-organized tables, BLU Acceleration generates metadata that describes the minimum and maximum range of the data values found in “chunks” of data records. (The ranges are associated with approximately 2,000 records.) This metadata is then stored in a special internal table known as a synopsis table and is updated automatically as INSERT, UPDATE, and DELETE operations are performed.

When an analytic query is executed, BLU Acceleration examines the appropriate synopsis table(s) to identify “chunks” that contain data the query is looking for. It then goes straight to those “chunks” and retrieves the data desired.