Microsoft's .NET Framework is gaining acceptance among solution developers who traditionally rely on Microsoft development tools. Some of these developers want to take advantage of the robust transaction support, tight security, reliable messaging, and workload and system management that are unique strengths of iSeries servers. It seems that the combination of .NET Framework and a powerful database server, such as DB2 UDB for iSeries, can result in a scalable software solution that's very appealing to the development community.

The .NET applications rely on services of .NET providers for communication with back-end database servers. A .NET data provider is used for connecting to a database, executing commands, and retrieving results. Currently, four providers can be used to access DB2 UDB from .NET applications:

The provider supports a full set of .NET data types and provides rich SQL functionality to enable applications to easily access and process data stored on your iSeries. These features are currently implemented in the iSeries Access .NET provider:

The following functionality is not yet available through the provider:

The iSeries Access .NET provider ships with iSeries Access V5R3. It supports the iSeries servers running i5/OS V5R3 and OS/400 V5R2. Note that some functionality, such as 63-digit decimal precision, is available only on V5R3 servers. For the best code stability, you should always load the latest database group PTF on the iSeries system (SF99503 for V5R3 or SF99502 for V5R2) as well as the most recent V5R3 iSeries Access Service Pack. As with any other managed provider, the .NET Framework needs to be already installed on your PC.

This section covers implementation details for a sample Visual Basic (VB) .NET application called DB2i5Access (download here). The program uses the iSeries Access .NET provider to obtain a database connection and to manipulate database rows in a DB2 table called STAFF. The table is part of the sample DB2 schema, and it can be created with this stored procedure call:

The procedure has been shipped with i5/OS and OS/400 since V5R1.

The application works in the disconnected mode. In the disconnected mode, a DataAdapter object retrieves data from the database and stores it in a DataSet object that serves as a local data cache. A .NET application can use the data cached in a DataSet without requiring multiple trips to the database. A DataAdapter can also implicitly update the central database with changes made to the DataSet. We used Microsoft Visual Studio .NET 2003 to develop the sample application. The main application dialog is shown in Figure 1. 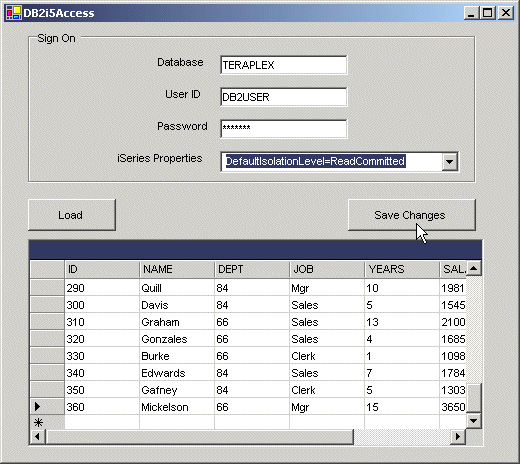 After a new project is created, a reference to the assembly that contains the iSeries Access .NET provider needs to be added to the solution. You can accomplish this task by right-clicking the References icon in Solutions Explorer and selecting Add Reference. In the Add Reference dialog, find the IBM DB2 for iSeries .NET provider component and click Select and then OK. It is also very useful to add the iSeries Access provider classes to the Visual Studio Toolbox. To do so, select Tools > Add/Remove Toolbox items, and on the Customize Toolbox dialog, check the iSeries provider-specific classes (iDB2Command, iDB2CommandBuilder, iDB2Connection, and iDB2DataAdapter). Now, drag and drop the iSeries provider classes onto the design pane. Currently, the iSeries .NET provider does not provide wizards to allow you to visually configure the classes required to access and modify DB2 data, so most of the tasks need to be accomplished programmatically. As mentioned, in the disconnected mode, there are several ADO.NET objects that cooperate to provide the database access mechanism. The required objects and their relationships are illustrated in Figure 2. 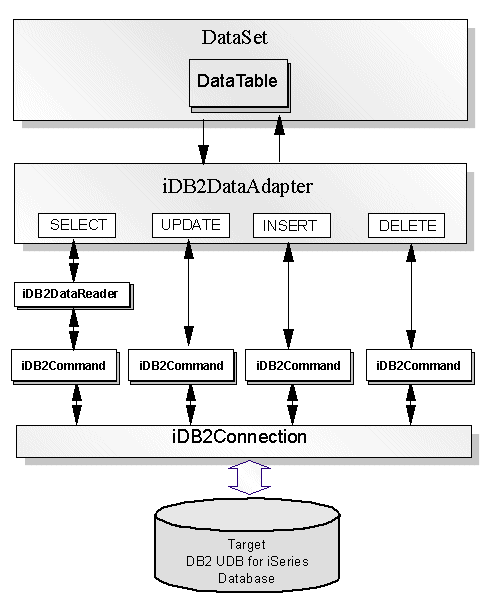 Let's have a closer look at the most critical source code fragments that need to be manually implemented by a database developer.

Note the syntax of the keywords on the connection string. The keywords are provider-specific and usually differ for different databases. In addition to the authentication info, the iSeries connection string may also specify other connection parameters, such as Default Collection (schema), Default Isolation Level, Pooling, etc. Consult the DB2 UDB for iSeries .NET provider Technical Reference for a complete list of supported parameters. The above code sample, for illustration purposes, has the user ID and password hard-coded in the application program. In fact, our sample application uses TextBox controls to allow the user to specify valid credentials at runtime.

An iDB2Command object executes action statements and submits queries. It has several properties that specify the execution context:

In our scenario, we instantiate four iDB2Command objects that the iDB2DataAdapter needs. They represent the four fundamental SQL statements: SELECT, INSERT, UPDATE, and DELETE. The following code illustrates how to create and set up iDB2Command objects:

For clarity, UPDATE and INSERT statements are not listed here. At [1], the SELECT command is set up to retrieve all rows from the STAFF table over the conMyiSeries connection. At [2], a parameterized DELETE statement is specified. The statement uses a parameter marker (?) as a placeholder for the ID value that will be provided at runtime. The parameter markers foster a more efficient processing of SQL statements because a parameterized statement can be prepared once and executed many times. The DELETE statement requires an iDB2Parameter object that is bound to the parameter marker. Note that the original value of the ID column is used to locate the staff member row in DB2. The statement unconditionally deletes the corresponding row in the database. In other words, it does not take into account whether the original row image has been modified by other users. This is probably not the best business practice. In a more realistic scenario, we would probably use the so-called "optimistic locking approach," where we would check if the local image still matched the image on the database server before deleting a row. This could be accomplished with a DELETE statement modified as shown below:

The same approach could also be applied to the UPDATE statement.

Exception handling in ADO.NET complies with the Common Language Runtime (CLR) specification and is consistent across all supported .NET programming languages. In CLR, the control structure is the Try-Catch-Finally statement. An error that occurs in the Try block is handled in the Catch block. The iSeries Access .NET provider implements the iDB2Exception object that can be used to monitor for the provider-specific exceptions. The provider throws an iDB2Exception whenever it encounters an error generated from the iSeries host server or from the underlying iSeries Access APIs .

The iDB2Exception contains a collection of one or more iDB2Error objects. The DB2i5Access application uses the iDB2Exception to intercept database errors that can occur at the time the rows are loaded into the DataSet or the updates are submitted to the database. For example, the btnLoad_Click method monitors for iSeries-specific errors and shows an appropriate error message box when unexpected conditions are encountered. See the following code fragment for implementation details:

Troubleshooting a multi-tier application is usually not trivial because the developer needs to deal with software components that reside in different operating system environments. Two tools can be particularly useful for problem resolution:

The iSeries Access .NET provider communicates with a corresponding iSeries server job. This server job runs the SQL requests on behalf of the .NET client. The iSeries database server jobs are called QZDASOINIT, and they run in the QUSRWRK subsystem. At any given time, many database server jobs may be active on the system, so the first step is to identify the job that serves the particular client connection, which is easily done by running the following CL command:

Here, DB2USER is the user profile that is used to connect to the iSeries server. This approach works even in the disconnected mode. Thanks to connection pooling, a corresponding job is held even after the iDB2DataAdapter has closed the database connection.

A sample of the job log messages with debug messages enabled is shown below:

The iSeries Access .NET provider ships with a tracing utility, which can be used to collect detailed client-side traces. The .NET provider tracing is turned off by default. It can be enabled by calling the CWBMPTRC program on Windows. Here's an example of how to switch on tracing:

The trace file by default is named IDB2TRACE.TXT and is stored in the C:Documents and SettingsAll UsersDocumentsIBMClient Access directory.

DB2 Connect implements the Distributed Relational Database Architecture (DRDA) to access data stored in DB2 UDB for iSeries and other DRDA-compliant database servers. A .NET client that uses DB2 .NET provider connects to a DRDA server job on iSeries. The iSeries DRDA server jobs are called QRWTSRVR and they run in the QUSRWRK subsystem. You can use the DB2 Configuration Assistant (db2ca) on the Windows client to configure the required DRDA connection to the iSeries.

Once the connection has been configured, you can take advantage of the DB2 Visual Studio add-in. The DB2 add-in provides a rich collection of functions that support DB2 servers directly in Visual Studio's IDE. These are the most important features:

To illustrate how a wizard simplifies the developer's work, assume that we decided to use the DB2DataAdapter in our DB2i5Access sample application. In this case, instead of programmatically defining the database connection, required SQL statements, and statements parameters, we drag a DB2DataAdapter object from the Visual Studio Toolbox and drop it on the form designer. This launches the configuration wizard. First, we provide the iSeries database connection information. Remember, the DRDA connection to the iSeries needs to exist at this time (use db2ca to configure it). Then, we specify what SQL commands are required by the adapter. In addition to the default SELECT, we choose INSERT, UPDATE, and DELETE. Next, we specify the SELECT statement as shown in Figure 3. 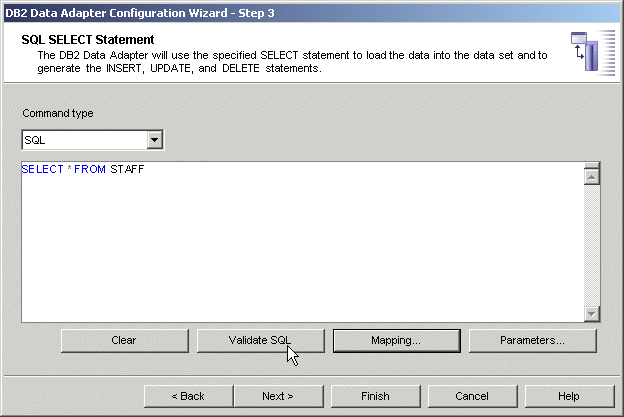 Figure 3: Define SQL statements with the DB2 Data Adapter Configuration Wizard.
At this point, the wizard also allows you to validate the statement on the back-end iSeries database as well as provide the table to dataset mapping. Similarly, we define other SQL statements. We use the wizard's Generate function to automatically generate the statement text along with all required parameters. For example, the Generate function used on the UPDATE statement dialog generates the UPDATE statement that implements the optimistic locking. This is shown in Figure 4. 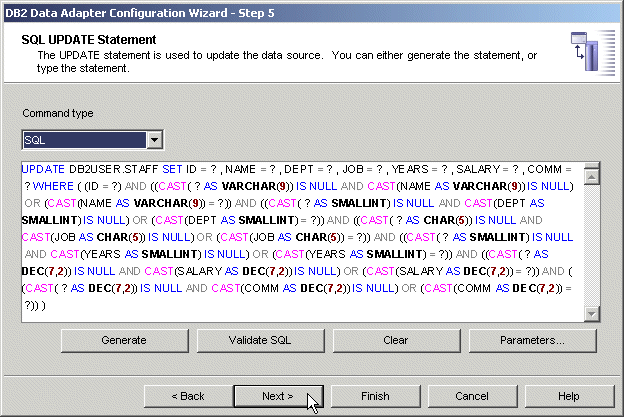 Figure 4: Generate an Update statement.
At the end of the configuration process, the wizard creates two objects associated with the VB Form class: db2Connection1 and DB2DataAdapter1. The wizard also generates the necessary code in the "Windows Form Designer generated code" region. The developer should not modify this code. The wizard should be used to make any changes in the DB2DataAdapter configuration.

Hopefully, this short walkthrough has given you a taste of the truly unique capabilities of the DB2 add-in. See DB2 Development Add-In Technical Preview for more information.

What Provider Is Right for You?

Consider the DB2 UDB (LUW) provider if you need to access different DB2 UDB platforms, such as DB2 UDB for Windows or DB2 UDB for z/OS, in addition to iSeries or if you wish to take advantage of the GUI add-Ins discussed in the previous section.

Jarek Miszczyk is the Senior Software Engineer, PartnerWorld for Developers, IBM Rochester. He can be reached by email at This email address is being protected from spambots. You need JavaScript enabled to view it..