When IBM met with its Business Partners in Las Vegas two weeks ago, it pledged to launch more than 100 "innovation hot spots" where Partners can build new solutions and enhance existing ones using IBM technologies. These centers could advance IBM's strategy for reenergizing the iSeries by helping software vendors to develop modern solutions for the server.

Over the last year, IBM has extended the Innovation Center concept yet again by opening 40 Business Partner Innovation Centers (BPICs) in North America and Europe. As their name implies, BPICs are managed by Business Partners with sponsorship from IBM. Many of the company's distributors--including Arrow, Avnet, Ingram Micro, Sirius Computer Solutions, and Tech Data--have formed BPICs to help their resellers build solutions on IBM's hardware and software. In addition, solutions providers have formed BPICs to help customers integrate IBM technologies (especially WebSphere products) into their IT infrastructures. Among them are providers with iSeries skills, such as CommerceQuest, Covansys, Miracle Software Systems, MSI Systems Integrators, and Syscom.

During 2005, IBM plans to open 100 additional BPICs to put more of its technologies and expert assistance in the field. Though IBM is not publicly providing the names of future Business Partner sponsors, a significant percentage of them will have iSeries skills. Many of these BPICs will help the iSeries community to adopt the technologies and tools that are part of the iSeries Developer Roadmap. The following diagram shows the new version of the Roadmap that IBM unveiled last month as part of its iSeries Initiative for Innovation. 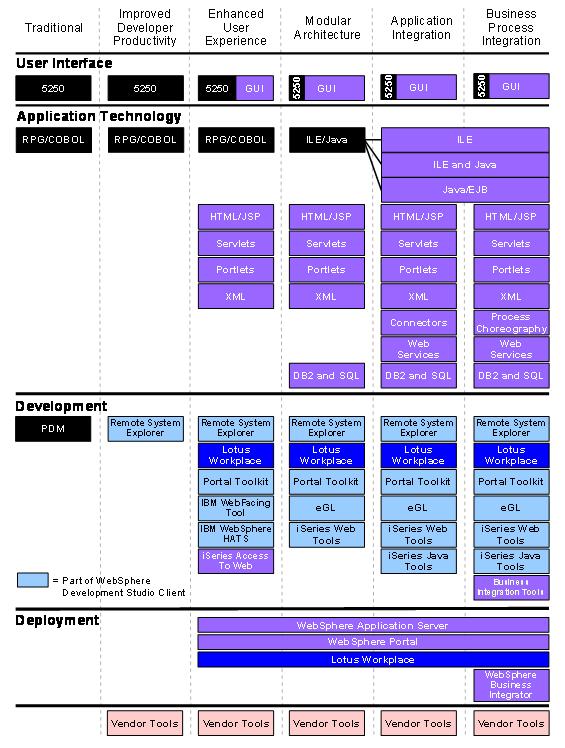 As I explained in an article last month, the new version of the Roadmap is notable for including a wider range of IBM products and open technologies. Many BPICs are already providing services around these products and technologies, including those that are new to the Roadmap. Several BPICs, for instance, have used WebSphere Portal Server and WebSphere Business Integration Server in projects that involved the iSeries.

In addition, it is possible that many BPICs will begin to feature some of the third-party tools that IBM now includes as part of the iSeries Developer Roadmap. IBM has already secured agreements from over 60 iSeries tool vendors to support the Roadmap and participate in the iSeries Initiative for Innovation. As it increases its collaboration with these providers, IBM may let some of them use the BPICs to educate and enable customers. Indeed, it is possible that several tool vendors will open their own BPICs.

In short, IBM's latest investment in its Innovation Centers provides much-needed funding for the company's campaign to revitalize the iSeries. It puts more middleware products and application modernization tools in the field where iSeries users can touch and test them in live environments. It could also provide more iSeries experts with the support they need to educate customers and Partners on the latest technologies. I am certain that the iSeries Division wants to leverage IBM's Innovation Center strategy to reenergize the iSeries, and I hope they use it to the fullest advantage. When a wave of investment like this comes along, it is vitally important to catch it.

Lee Kroon is a Senior Industry Analyst for Andrews Consulting Group, a firm that helps mid-sized companies manage business transformation through technology. You can reach him at This email address is being protected from spambots. You need JavaScript enabled to view it..