This method for deploying menus uses only three objects to represent as many menus as needed. And menus can be changed by editing the file's records, instead of the code.

A menu is a list of options from which the user makes a selection. Each option is a brief description of the job that will be run when the user makes that selection. An option can lead to a program or to another menu of options. In IBM i, a menu consists of one display file, one message file, and one *MENU object [1]. In the IBM i environment, the display file contains the menu image, the message file contains the commands, and the *MENU object contains the name of the display file and the message file. In order to create one menu, we have to create a source file for the specified menu, define prompts for the menu image, define the command source for the menu, and finally save and compile the menu and command sources. If we want to change the menu, we have to reedit the code and recompile objects. This method is inconvenient if there's a large amount of menus, if we need to change options, or even if we want to avoid editing code.

Here, we present an alternative method for deploying menus in IBM i. All menus in our system can be stored in one DDS file and displayed by an array-subfile program. Each menu is stored as a tree-like form in the DDS file. Thus, the Dynamic Menu program can assign a menu with its options and can be easily navigated.

The Tree Data Structure (T-DS) is one of the most powerful data structures; it's often used in advanced tasks such as AI and compiler design [2, 3, 4]. Rooted trees can be used to store data in the computer's memory in many different ways. Unlike array, linked list, stack, and queue, which are linear data structures, tree is a hierarchical data structure. But what exactly is a tree? A graph is considered a set of vertices/nodes, which represent objects, data, or even operations, and edges/links, which represent links between the nodes.

A tree is a special kind of graph that follows a particular set of rules and definitions (Figure 1): 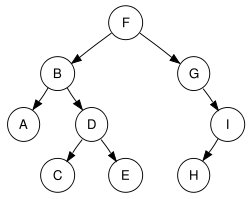 Figure 1: This is an example of a tree data structure.

To store information in a hierarchical manner, a DDS file with the following fields will be used. Each record in this file represents one vertex (node or leaf) of the tree.

Listing 1 shows an example of the DDS file code. Of course, the file and the logic can be expanded to deal with authority issues or to call leaf programs with additional input parameters, commands, etc. See the example data displayed in Listing 2.

The program that manipulates the file's data is in essence an array-subfile program [5]. The dynamic menu (DMenu) program uses one main array as a pool and one screen array to fill the screen subfile. Initially, all records related to the root menu are loaded in a main array. Each time, the dynamic menu program reads the appropriate records from the main array and creates a subfile of output records via the screen array. When the entire subfile is written, the program sends the entire subfile to the display device [6]. The flow diagram is displayed in Figure 2. Please note that this TechTip is not intended to explain how an array-subfile program works. 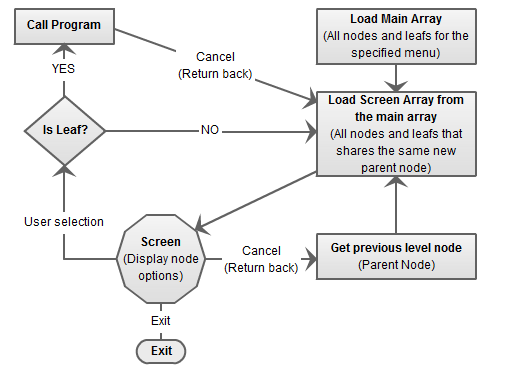 As mentioned before, the dynamic menu can be used to display all menus in a system. Thus, DMenu should be called with at least one input parameter (of course, entry parameters can be expanded to return errors or messages to the previous program, etc.) in order to select only the records that are needed for the specified root menu.

Let's look at the following example, which is based on the data of Listing 2. Call the dynamic menu with the appropriate input value (Listing 4):

By selecting option 3, the procedure is repeated. The description of the Sub-Menu 2 is displayed in the screen's header, while the records that are assigned to this sub-menu (rrn: 7, 8) are passed to the screen array. The screen array is sorted by the DYNSSORT field, and it fills the screen's subfile (Figure 4).

Of course, there are many ways to implement the code of a dynamic menu. The following snippets of code constitute a simple DMenu creation example.

As mentioned before, initially the main array must be loaded with all the root menu's related records. Listing 5 shows a code snippet for loading the main array from the file, where variable InpEntry is the program’s input parameter (e.g., 950030) and DYN00L4 is a logical file with one key (DYNFUNCT). The code ID of the root menu record is stored in the FirstScreen global variable.

The screen array's loading procedure can be called with the menu's code ID as an input parameter (e.g., FirstScreen variable). This procedure is divided in two sections (Listing 6). The first section is responsible for filling the screen array if the input node is a root node, while the second section is responsible for filling the screen array in every other case. At the end, the screen array is sorted by the DYNSSORT file's sort field. In addition, a fold/unfold indicator is used to leave a blank between the menu's options. If the menu doesn't have many options (e.g., '7' in this example), then this indicator goes *On and the subfile displays the options with a blank record between them (Figure 3).

It must be noted that the input record's code ID is stored in the SavCurrPGM global variable.

The Call Leaf Program procedure takes as an input the code ID of a leaf record and calls the program that the leaf record indicates.

Finally, the following procedure takes as an input the code ID of a record and returns *On if the record is a leaf record.

Listing 9: Check if a record is a type leaf record

This TechTip presents an alternative method for deploying menus in IBM i. In IBM i, each menu is composed of three different types of objects (*MSGF, *FILE, *MENU). Each time we need to maintain a menu, we have to edit the code and recompile the objects. Instead of creating different objects with different source types for each different menu, by employing the proposed method we need only three objects (one screen, one program, one file) to represent as many menus as we like. All the menus are stored in one DDS file, and we can edit them without an intervention in the code. Finally, this method prevents the repeated programs' call, resulting in better performance and in avoiding the "many calls" limit.

George Karkavitsas is a PhD candidate in Computer Science at University of Piraeus. Email: gkark@webmail.unipi.gr