The advent of the Internet has had a tremendous impact on businesses. Virtually every business, no matter its size, has a presence on the Internet. But this presence comes at a cost. Typically, a business has several firewalls, routers, switches, Web servers, email servers, DNS servers, file servers, and DB application servers as a part of its Internet presence. More often than not, those servers are running heterogeneous operating systems that include expenses such as hardware maintenance contracts, software support contracts, software licenses, software upgrades, and separate administrative staff for the different operating environments. A great way to reduce these excessive costs is to consolidate the many servers onto your eServer i5 system. The i5's advanced partitioning capabilities allow a business to consolidate i5/OS, AIX, Linux, and Windows servers (Windows requires optional integrated xSeries adapters) onto one system to reduce, if not eliminate, these excessive costs.

Consolidating these various servers onto your i5 allows you to maximize the use of your resources. With the i5, you can dynamically allocate processors, memory, and storage to i5/OS, AIX, and Linux. Windows servers on an i5 system support dynamic allocation of storage only.

In an environment with many different physical servers, there will always be systems that are underutilized and systems that are overutilized. For example, your email server may be using only 50% of its processing capacity while your Web servers are struggling to keep up with all your Web transactions during peak business times. By consolidating your servers, you can dynamically move processing power between partitions without bringing them down or interrupting their workloads. You can decide where the processing power is needed most and then change it dynamically anytime it's needed elsewhere.

In addition, i5/OS, Linux, and AIX servers support dynamic allocation of memory. AIX and i5/OS allow you to allocate additional memory and remove excess memory on the fly. Linux has the same capability to add and remove memory, but the Linux partition must be powered down and restarted for the memory change to take effect. This flexibility for moving memory resources ensures all the servers have the right amount of memory when they need it.

There are other benefits beyond maximum resource utilization. Consolidating servers onto your i5 also allows you to use the virtual Ethernet for high-speed communication between partitions. The i5 allows you to create up to 4,094 virtual Ethernet LANs that run at bus speeds. Partitions on the i5 can use any of these virtual Ethernet LANs to communicate with other partitions. Not only is the virtual Ethernet fast, it is also secure as it is a virtual entity contained entirely within the i5 system. There is no external switch or hub that could be compromised to monitor traffic. In fact, by consolidating all AIX/Linux servers onto the i5, it is possible to replace some existing switches or hubs. This would allow you to eliminate any support/maintenance contracts associated with that network hardware. Alternatively, that hardware could be used elsewhere in the network infrastructure. Consolidation also helps to simplify any existing physical network by removing Ethernet cables and reducing congestion.

For this example, we will consider a fictitious business that has an existing Web presence and a network configuration as shown in Figure 1. 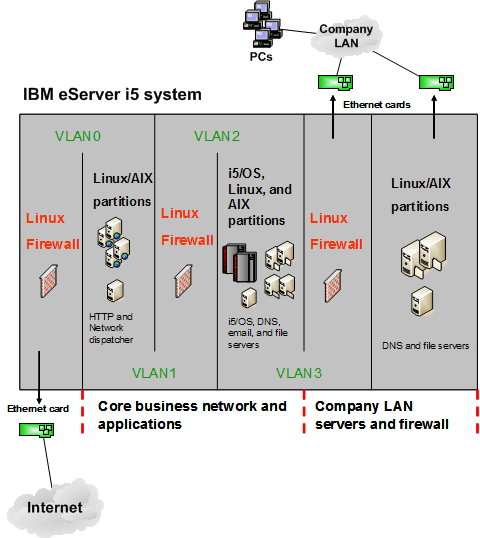 This single example illustrates the powerful partitioning capabilities of the eServer i5 system and shows what server consolidation can do for a business. With the release of i5/OS V5R3 and the i5, server consolidation has never been easier. Never before could you run i5/OS, AIX, Linux, and Windows on the same server. In addition, you can dynamically manage processor, memory, and disk resources for all your i5/OS, AIX, and Linux partitions. The advanced logical partitioning capabilities of the i5 provide virtually unlimited flexibility for consolidating servers.

Brett Leeser is a Staff Software Engineer on the IBM Customer Test team located at the Rochester, Minnesota, laboratory. He has over five years of experience in the software testing field. His areas of expertise include i5/OS, networking, and Linux. Brett can be reached at This email address is being protected from spambots. You need JavaScript enabled to view it..

Steven Janssen is a Staff Software Engineer on the IBM Customer Test team located at the Rochester, Minnesota, laboratory. He has over five years of experience in the software testing field. His areas of expertise include i5/OS hardware and software, IBM eServer logical partitioning, high availability configurations, and Linux. Steven can be reached at This email address is being protected from spambots. You need JavaScript enabled to view it..