Others will think you work for IBM.

A System i developer recently informed me that after several years of programming, he is finally learning to create commands. I am amazed that many developers have worked many years with the System i and its predecessors, yet have never created a command, but it seems to be very common.

This developer mentioned two areas that have given him trouble, and I was able to help him. First, he wanted to understand how to qualify an object. Second, he wanted to add help text to his command. I have seen this guy's code, and I know that he is very capable. I have no doubt that the commands he produces will be indistinguishable from those IBM ships with i5/OS. Here's the information I gave him. I hope it will be of benefit to many others.

See for yourself. Let's consider a command that requires the name of a file and the library in which that file is located. First, here's the command with two parameters. 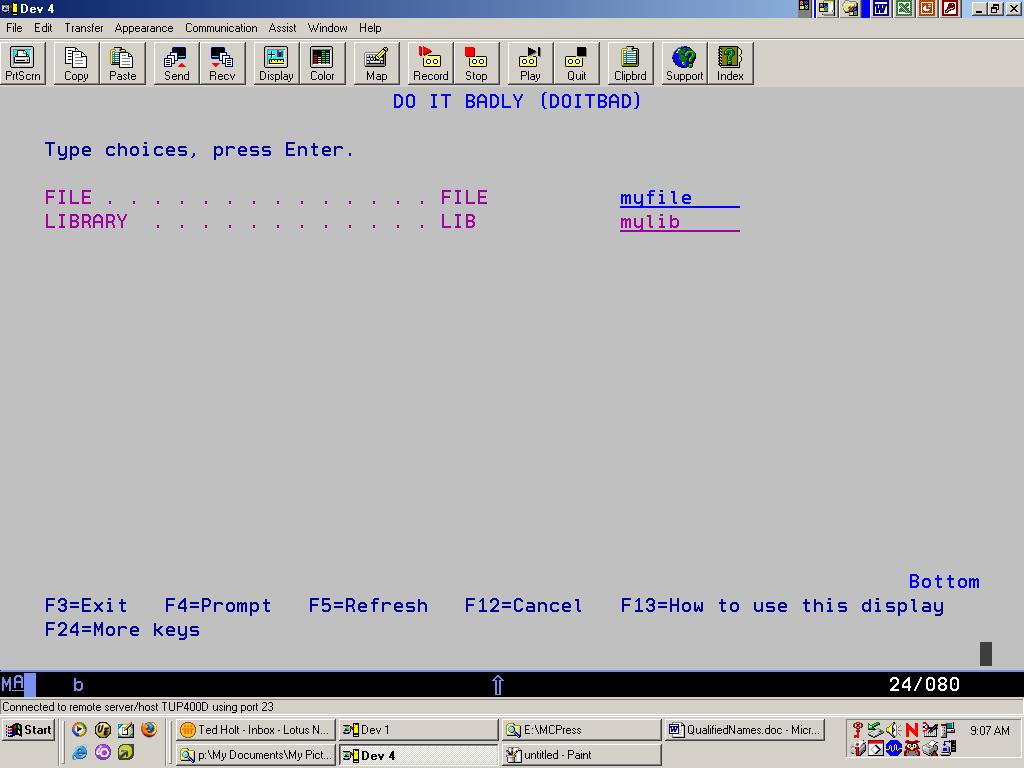 Figure 1: This is a bad example.  (Click images to enlarge.)

Take a look at the same command with a qualified file name. 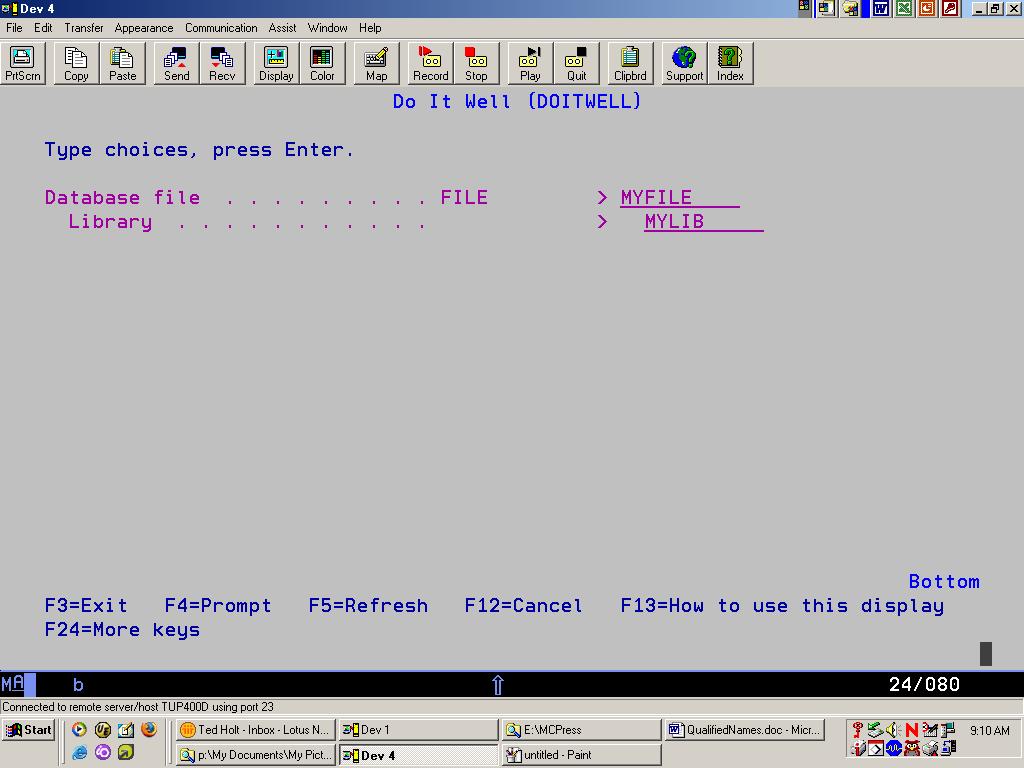 Figure 2: This is a good example.

The process of qualifying is not difficult. The three most common qualification scenarios are qualified object, job name, and file name with member. Let's look at each one in turn. I will show you how to code the qualification in command source code and how to process the qualified value in a CL procedure.

When you define a command parameter to represent an object that resides in the library file system, you will probably need to include a way for the user to tell which library holds the object. To define a qualified object, you'll need two QUAL commands for object and library. The first QUAL must have a label to name the qualification data type. Here is source for a command I'll call DOIT (Do It).

Notice the locations of the PROMPT parameters. I've included a PROMPT string on the PARM command to indicate the purpose of the parameter. Of the two QUAL commands, however, only the last QUAL, which defines the library, needs a PROMPT. I use this method because it makes my qualified parameters look just like those of the IBM-defined commands.

The command processing program (CPP) receives one parameter that contains the two values with no separation. In this example, both QUAL commands are defined to be of type *NAME, which i5/OS automatically defines as 10 bytes. Therefore, the CPP receives one 20-byte variable, with the file name in the first 10 bytes and the library name in the last 10 bytes. Here's a fragment of a CL program to process the command source given above.

The CL procedure receives the 20-byte qualified object name as &QUALFILE. Bytes 1 through 10 are the file name. Bytes 11 through 20 are the library name. In this example, I've used the substring function, %SST, to refer to the file and library name in the Check Object (CHKOBJ) command.

I almost always prefer to extract the individual parts of a qualified value into variables of their own. The following example is equivalent in function to the previous one. It differs in that the &QUALFILE variable is divided into the &FILE and &LIB variables.

The three QUAL commands that define the JOB data type define job name, user, and job number, respectively. As with qualified objects, the three parts that make up the parameter must be entered in reverse order. That is, the first value represents the last QUAL.

Notice also that I have defined a single value to allow an asterisk in the PARM parameter. A single value is a value that can be used instead of the fully qualified value. The CPP is to interpret an asterisk to mean the current job.

In the following program, I use an IF to check for a single asterisk in &QUALJOB. If that condition is true, I retrieve job name, user, and job number from the job attributes. If &QUALJOB is not a single asterisk, it must be a qualified job name, and I extract the three values from the parameter into the job name, user, and job number variables. Regardless of how the three variables are loaded, they serve to tell the Work Job (WRKJOB) command which job to display information about open files in.

IBM has two ways to qualify file names when a database member is involved. In some commands, such as Copy File (CPYF) and Override with Database File (OVRDBF), the file is qualified as any other object would be, and the member is specified in a separate parameter.

In other commands, like Copy to Import File (CPYTOIMPF), the member is included as a second element in the qualified parameter.

Here is a command in which the file member is included in the qualification.

The CPP receives the FILE parameter as a 32-byte string. The first two positions always contain the number two, to indicate the number of elements, in binary format. You can ignore them. The information you need begins in position three and spans 30 positions: 10 for file name, 10 for library name, and 10 for member name. Use the substring function to extract that information in a CL procedure.

I've given you the skeleton source code you need to define qualified parameters as IBM does. This will go a long way toward making your commands look and act like those of IBM's. There is one other thing that you need to do: You need to provide some help text. Absence of help text is a dead giveaway that your command did not come from IBM. Fortunately, defining help text is easy if you are running V5R3 or above.

In V5R3, IBM added the Generate Command Documentation (GENCMDDOC) command to i5/OS. This wonderful command relieves the developer of the grunt work in developing HTML and UIM (help text) documentation. It's a little goofy in the way it works, in that it doesn't return error messages to a green-screen session. You have to look at the job log to see if the command succeeds or not. Another quirk is that it may not be finished when the input-inhibited light goes away, because the command kicks off a Java application that runs in its own little world. But the good outweighs the bad.

To generate help text for the DOIT command, I ran the GENCMDDOC command from an interactive session.

In return, I got a source member called DOIT[THH1]  in file QPLNSRC of library MYLIB. If you prefer, you can generate the source in the IFS. The following command creates the UIM source code in stream file /home/mydir/MYLIB_DOIT.UIM.

Wherever you put the source, you'll need to edit it. Open the source member using your editor of choice and start looking for three periods inside angle brackets, like this:

These placeholders indicate where you need to fill in the blanks. Either replace the placeholders or delete the sentences or sections in which they are found. The following example shows how you might replace a placeholder with meaningful text.

You must have security administrator authority to run this command.

Once you've replaced the placeholders with meaningful text, create the panel group.

They'll Think You Work for IBM

One of the highest compliments I've ever been paid occurred on those occasions when someone thought a CL command that I'd written was part of the operating system. It's not that I'm a super programmer, but rather that I follow (as far as is practical) the standards IBM developers have set.

Learning to qualify objects and define help text is not difficult. Whether you're an old-timer or a newbie, if you've never learned to define your own commands, now is a great time to start.