“Whilst like a puffed and reckless libertine Himself the primrose path of dalliance treads And recks not his own rede.” (Hamlet, I, iii)

If you like to name things, the AS/400 Integrated File System (AS/400 IFS) is a treat. Can you correctly type a PC or UNIX-style long path name on the command line again and again? If so, congratulations! File names bedevil me. Since the first release of OS/400 in Version 1, I’ve been struggling with the proper name order for even the simplest of qualified names in CL commands. Is it library-slash-object or object-slash-library? I’m grateful that OS/400 prevents me from creating user libraries within user libraries; otherwise, I might still be debugging legacy code of library-slash-library-slash-object names. So when IBM introduced the AS/400 IFS with long path names in Version 3 five years ago, I thought, “I won’t be using any of this stuff.”

Simplicity vanished. Today, all my projects deal with the AS/400 IFS. From importing electronic data interchange (EDI) X.12 transaction sets across local Sockets objects to exporting Multipurpose Internet Mail Extension (MIME) formatted email and HTML Web pages, my AS/400 IFS has become a crucial warehouse for my business data. Now I must remember the new rules and puzzling quirks of PC and UNIX-style path names. Yet, amazingly, the new rules yield some elegant patterns and concepts. Here are some patterns that help me navigate the maze of new rules.

If you have ever faced a DOS command line, then you know the persnickety nature of path names. A path name tells the system how to locate an object through a sequence of directory and object names. Forward slashes (/) or backward slashes () separate names in this path. On the AS/400, a path name indicates a route into the AS/400 IFS. The AS/400 IFS provides a hierarchical structure where you can organize objects like fruit on different branches of a tree. A path name into the AS/400 IFS specifies the subbranches that lead to a particular “fruit.” By the way, the AS/400 IFS is like a genetically mutated tree because a single fruit may hang from multiple branches.

other objects, including other directories. Directories within directories are called subdirectories. The highest directory in the AS/400 IFS fruit tree is the root (/) directory.

The AS/400 IFS can contain many different types of objects such as Java class files, image files such as JPGs and GIFs, and even video and sound files. In fact, the AS/400 IFS can store pretty much any type of object you’d normally only associate with the PC world.

The QSYS.LIB file system appears in the AS/400 IFS as a subdirectory below the root (/) directory. Each component of a QSYS.LIB path name contains the object name, followed by a period (.), followed by the object type of the object. The object type suffixes are required because the same object name can appear multiple times in a library with different types. Remember to specify the opening slash (/) before QSYS.LIB in order to create an absolute path name. Without the opening slash, the system will treat the path name like a relative path name and try to look for a subdirectory named QSYS.LIB in your current directory. In the following example, I have a file named BILL, which has a member named AUG, which is stored in the library named PROFIT:

A hard link can create an alias path name. I like this feature a lot. The ADDLNK command in the following example creates a hard link named A in my home directory. The A links my home directory to a file named X12.txt in the /exports/daily subdirectory. After this ADDLNK command executes once, the following two EDTF commands give me identical results. Obviously the second EDTF command is easier for me to type!

Suppose that subdirectory /Testing actually contains the hard link to the Page2.html file. You could create a *SYMLNK object named Parent in the root (/) directory containing a soft link to the /Testing subdirectory with the following command:

Later, if you execute the following two commands to port Page2.html to a subdirectory named Live, your anchor tag will continue to work OK:

The point here is that you do not have to edit or change the URL in the anchor tag if you use soft links.

The new Process a Path Name (Qp0lProcessSubtree) API from V4R3 uses the long path name style. This API searches the AS/400 IFS directory tree under a specific path name. The API caller passes a pointer to a user exit procedure; the API invokes the user exit procedure for each object in the AS/400 IFS directory tree under the specified path name, passing in the object name as a parameter in two-byte Unicode format. When the user exit procedure receives control, it can build lists or tables. It is this API that drives an EXPLORE utility I have created for this article.

One of the things I like about Windows is the Explorer. Windows Explorer lets me descend through a nest of folders to a file, click the file icon, and auto-fill the absolute path name of the file into some entry field. No typing is necessary. To mimic this behavior, I created a green-screen EXPLORE utility to interface with OS/400 commands on an AS/400 command line. You can download the code for EXPLORE from www.midrangecomputing.com/mc. There are three source member components you will need to compile: command EXPLORE, display file EXP001D, and ILE RPG program EXP001R.

Type EXPLORE on an AS/400 command line and press the Enter key. Figure 2 shows a screen shot of the first screen on my home system when I run EXPLORE. This is the list the objects in my root (/) directory. EXPLORE calls this level 1. The left column lists the object names. The right column lists object types. “More...” or “Bottom” in the lower right-hand corner indicates whether the roll keys will page forward and backward through more objects in the directory.

Position the cursor on an object name of type *DIR, press the Enter key, and EXPLORE will drill down to the next level, displaying all objects in your selected subdirectory, provided you have read (*R) data authority to the directory. The Level count at the bottom of the screen will increment by one. You can drill down to 99 levels. EXPLORE uses a recursive RPG IV subprocedure to drill down through AS/400 IFS subdirectories.

You can interface EXPLORE with OS/400 commands in the following way. Drill down through a nest of subdirectories, position the cursor on the name of an object, and

With more and more UNIX-type systems being ported to the AS/400, I’ll probably use the EXPLORE utility F9 key more often. No more typing an audaciously long path name on a command line for me!

Figure 1: A long path name style uses a pointer to the Qlg_Path_Name_T structure. 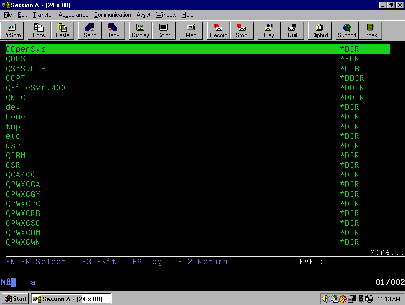