Business Process Execution Language (BPEL) was developed as part of a cooperative initiative by IBM, BEA, and Microsoft. This XML-based language is basically a combination of IBM's Web Services Flow Language (WSFL) and Microsoft's XLang. The resulting language is also known as BPEL for Web Services, or BPEL4WS.

These activities give more detailed control over the BPEL process flow as an IF or CASE statement might in traditional programming languages. The 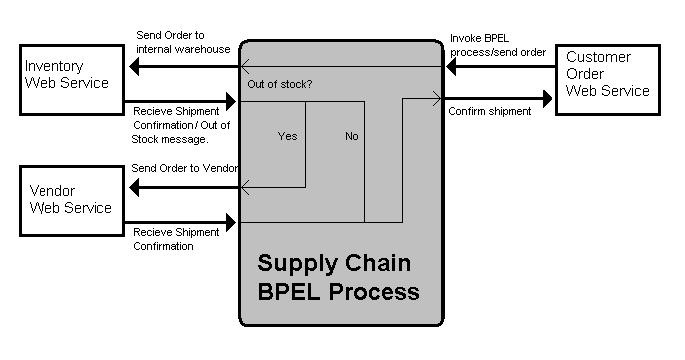 Many tools are available to help you to build BPEL processes. IBM's BPEL tool offering is Business Process Execution Language for Web Services Java Run Time (BPWS4J). BPWS4J uses a SOAP interface to make the BPEL4WS document available as a Web service. In addition, BPWS4J includes a plug-in to give you the ability to edit BPEL4WS files inside of Eclipse. BPWS4J is compatible with the Apache and Tomcat Web servers. Microsoft includes support for BPEL processes within its BizTalk Server product. Microsoft also has support for designing and implementing BPEL documents within its Visio tool and Visual Studio.Net, both of which can be used to design a business process and output a BPEL document. The resulting BPEL document is then executed within the BizTalk Server. Active Endpoints, Inc. (AEI) offers an open-source BPEL solution called ActiveBPEL engine. ActiveBPEL engine offers full support for BPEL4WS 1.1 specifications. This open-source product is incorporated in several other commercial products offered by AEI. This helps ensure commitment to the development of the open-source product. Oracle has a BPEL solution called Oracle BPEL Process Manager. Like the others, this product offers full support for BPEL 1.1, as well as an easy-to-use visual designer.

By extending XML Web services in this manor, supply chain management is greatly improved by the ability to automate the physical business processes that are already occurring. The standards-based approach of BPEL eliminates the use of proprietary languages to build your business process, and the number of heavy hitters in the software industry offering BPEL solutions only helps to emphasize the role that this technology is poised to take.

Mike Faust is a Business Analyst for Invivo Corporation in Orlando, Florida. Mike is also the author of the books The iSeries and AS/400 Programmer's Guide to Cool Things and Active Server Pages Primer and SQL Built-in Functions and Stored Procedures. You can contact Mike at This email address is being protected from spambots. You need JavaScript enabled to view it..